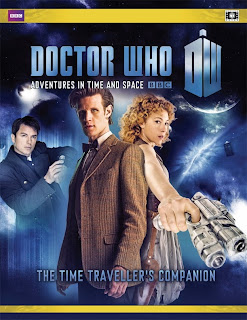 After Doctor Who: Adventures in Time and Space first came out a few years ago, a couple of other supplements soon followed it (a GM Screen and Aliens and Creatures) and others were announced. It was exciting for people who were both roleplayers and Doctor Who fans as it had been a long time since a Doctor Who roleplaying game had been in print. However, after those first few releases, the game entered a sort of limbo. The announced products remained announced but not actually available and nothing new was released. Word came through that the game needed to be retooled for the arrival of the eleventh Doctor. But the eleventh Doctor arrived and even had a couple full seasons and still, there were no new products for Adventures in Time and Space. Then, last year, the revised eleventh-Doctor version of the game finally arrived, and Cubicle 7 assured fans more products were still on their way.

And at long last, those products have started to show up. The Time Traveller’s Companion and Defending the Earth: The UNIT Sourcebook (the two products that waited in limbo for a long time) are both available, and a series of supplements covering each Doctor has also begun releasing with the supplements for the first and second Doctors currently available and further Doctors still to come. Once again, it’s time for Doctor Who roleplaying fans to be excited.

The first of these books, The Time Traveller’s Companion is a massive 240-page tome full of information about time travel, Time Lords, TARDISes, and more. Pretty much everything to do with time and its potential use in-game gets discussed in quite a lot of detail. Most of the book is descriptive detail, from a complete history of Gallifrey to temporal mechanics and space-time phenomena. Adventures in Time and Space is a rules-light game and this book maintains that, but that doesn’t mean there aren’t any new rules elements here. These are mostly in the form of new traits (particularly Time Lord and gadget traits) and new gadgets, but there are also detailed rules for piloting TARDISes, regeneration, and more. I’m actually extremely impressed by just how much detail there is in the book. It has definitely made the long wait worth it.


The Time Traveller’s Companion compiles everything the show has ever revealed about Gallifrey, time, and TARDISes, and strings it all together into one coherent whole, even managing to deal with areas where the show has contradicted itself. Of course, this means filling in some of the blanks left by the show, such as details on the Time War or the history of the Meddling Monk. This can be a bit of a risk as some future television episode could easily contradict what this book reveals. However, the book is careful not to take any more liberties than are strictly needed (unlike the old FASA Doctor Who Roleplaying Game, which made a number of unusual and not-entirely-logical additions, such as deciding that the Monk was an earlier incarnation of the Master). Indeed, it is sometimes difficult to pick out exactly what has been added that does not come directly from the tv series. The authors have done a very thorough job of scouring the entire series for every smallest detail to include in the book, making any additions to smooth it all out as small as possible. (I suspect, too, that some of the additions were inspired by Doctor Who books and audios, although no such stories are ever referenced directly, as that would be outside the bounds of Cubicle 7’s license.) What they end up with is a book that reads as more than just a game supplement, but also a comprehensive guide to the television series.

After a brief introductory Chapter 1 giving an overview of the whole book, the book proper begins in Chapter 2 with a look at Gallifrey, both its history and society. Also looked at are the major laws of time and the chapterhouses of the Gallifreyan Academy, which I must admit, I’ve always thought of as separate academies, rather than chapterhouses of a single academy. However, this appears to be a good example of how the book reconciles contradictions in the tv show. “The Deadly Assassin” refers to Prydon Academy and references Prydonians, Arcalians, and Patrexes, but other academy references over the years have generally just been to “the Academy” (although I admit my memory may be a bit faulty here). Turning Prydon Academy and the others into chapterhouses of the Academy is a good way of dealing with this. This chapter also provides the option of playing Gallifreyan characters who are not Time Lords, one option not really covered in the main rules, so it’s good to see it here.

This leads into Chapter 3, which provides advanced rules for creating and playing Time Lord characters. This entails a sizeable selection of new traits for Time Lord characters (all these traits have the Time Lord trait as a prerequisite) as well as story point costs for the type of TARDIS your Time Lord character has (the older the TARDIS, the fewer story points you have to sacrifice). There is also an extensive section on handling regeneration in the game, including rules for determining how easy or difficult a regeneration ends up being and random tables for determining changes in attributes and appearance. The system works very well without adding any unnecessary complication to the game. It involves a regeneration roll which works like any other roll in the game. The level of success or failure helps determine the final results. Greater successes may allow a number of “rerolls” and/or “picks” on the random charts. Rerolls allow you to roll a result again, but you must take the new one. Picks allow you to roll again and choose between the two results.

Chapter 4 is a look at temporal phenomena and time travel devices that aren’t TARDISes. Pretty much every weird pseudo-scientific anomaly that has ever even been mentioned on Doctor Who gets a mention here, from the Blinovitch Limitation Effect to Chronic Hysteresises. I am intrigued by the inclusion of Temporal Nexus Points, moments or locations in time that are important, making it dangerous to play around with time there. Although fixed points in time (mentioned frequently in recent years on Doctor Who) are included here as a type of Temporal Nexus Point, I can’t recall any occasion in the tv series where anything is actually referred to as a “Temporal Nexus Point”. The only use of this name I’m familiar with is in the old FASA game, and I’ve always assumed it was something FASA just made up. Is this a direct reference to the old FASA game, or is there an actual brief reference to a Temporal Nexus Point in the show at some point? While I like to consider myself quite knowledgeable in Doctor Who, fifty years worth of episodes make it difficult to remember everything ever said on the show, so I concede that I may simply not be remembering a mention. I am very curious.

The various time travel devices in Chapter 4 are presented as gadgets that gamemasters and players can use in the game. Each has a list of traits and story points along with its description.

Chapter 5 devotes itself entirely to the TARDIS, from how to pilot a TARDIS to special manoeuvres that you can attempt with a TARDIS, such as temporal orbits and time rams. It also covers TARDIS damage and repair, as well as all the various TARDIS systems and rooms. It groups the different makes of TARDISes into four main categories: ancient, decommissioned (old and out-of-date, but not quite as old as ancient TARDISes), modern, and advanced (TARDISes developed during the Time War). It provides templates for each of these broad categories that players can then customize with additional traits of their own choosing.

The remainder of the book is gamemaster material. It looks at much of the same kinds of material as the first half of the book, but provides additional information, such as the more secret parts of Gallifreyan history—the things the Time Lords didn’t want the rest of the universe to know about. Chapter 7 includes game stats for some of the most famous Time Lord villains and renegades, such as Morbius, Omega, the Master, and even Romana. It also includes information on the Matrix and various Time Lord relics, such as the Rod and Sash of Rassilon. Perhaps most interesting are the weapons of the Time War, devices of such power that GMs will want to be very careful about including them in their games. To help create and describe such devastating devices, the chapter includes “Apocalyptic Traits”, such as Probability Shredder, which allows a weapon to expend story points to change the results of any and all rolls made in a single round—including the rolls of anyone or anything else, not just the weapon or its user!

Chapter 8 provides gamemasters with advice on using Gallifrey and other Time Lords in their games. It helps GMs determine what period of Gallifreyan history to set their games in, giving advice on every period from ancient Gallifrey right up to the Time War itself. There are also game stats for generic Time Lords and Gallifreyans.

The final chapter is on “Advanced Temporal Mechanics”. It covers much of the same material as Chapter 4, but looks at the implications of using these phenomena in a game, particularly how they can cause problems and go wrong. The chapter also includes a number of adventure seeds dealing with these phenomena. I do love the made-up term coincidox, a minor paradox that happens via simple coincidence (such as providing Shakespeare with a line from one of his as-yet-unwritten plays, causing him to copy the line from you, even though you learned it from his play). There is the option to allow players to expend 3 story points to avail themselves of a handy coincidox.

At the back of the book is an Appendix bringing together all the new traits and various tables found throughout the book into one spot for easy reference. There is also a TARDIS character sheet and very handy temporal phenomena cards. Each card describes one temporal phenomenon and can be handed to players of Time Lords or other knowledgeable characters so that they can have their own characters describe something in their own words (much like the Doctor does) without having to ask the gamemaster to do it for them. It helps to make their characters seem just a little more authentic.

It’s been a long wait for The Time Traveller’s Companion, but now that wait is over and it’s been well worth it. This is an excellent supplement and will enrich any Doctor Who roleplaying experience.
Posted by Michael Ray Johnson at 00:19