We Be Goblins Too! 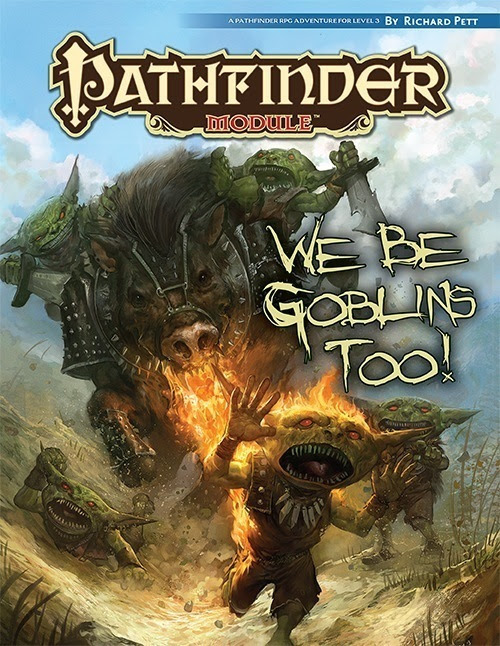 
We Be Goblins Too! follows pretty much the same format as We Be Goblins! It is divided into two main sections just like its precursor, with each section following the same pattern as the earlier adventure. In fact, it’s pretty much the exact same adventure, just with more difficult challenges and encounters. As such, while I think We Be Goblins Too! is a good adventure and will be fun to run, it’s not as good as We Be Goblins! I also wouldn’t recommend playing the two adventures back-to-back as the repetition will be all the more apparent. However, if it has been a while since people have played the first adventure, this one can be another great change from the usual adventures. Played as a one-off, it should work great.

The adventure uses the same pregenerated characters as We Be Goblins!, only advanced to third level. Of course, just like with the earlier adventure, it’s easy for players substitute characters of their own creation. The adventure opens with the Licktoad tribe (to which the PCs belong) having been destroyed and the PCs are the only survivors, now in search of a new tribe. (The Licktoads were wiped out in The Brinewall Legacy. However, that adventure also claims the heroes of We Be Goblins! died as well. We Be Gobins Too! retcons that.) They come to the Birdcruncher tribe, which is having problems of its own. An ogre druid and his daughter have moved into the area along with their fire-breathing pigs, and they are causing much trouble for the Birdcrunchers. The Birdcrunchers’ chieftain went to face the ogre, and so did his successor and that one’s successor. None have returned. The Birdcrunchers now need a new chieftain who can go and remove the ogre for them. They offer the PCs the chance to become chieftain and subchieftains.

First, however, the PCs must take part in a chieftain moot to prove their suitability for the role of chieftain (and subchieftains). This takes the form of several contests that they must succeed at (just like in the first part of We Be Goblins!). Once they have proven their worth, the tribe awards them with the Crunchy Crown. The PC who has earned the most points becomes chieftain and the other PCs become subchieftains. The Birdcrunchers then expect the PCs to head off the very next morning to deal with the ogre threat.

Tracking down the ogre is a quick exercise. The PCs must then deal with the ogre’s boar animal companion (named Piggy), as well as several other pigs, the ogre’s daughter, her giant ferret pet, and the ogre, Pa Munchmeat, himself. Much like We Be Goblins!, this second part of We Be Goblins Too! is mostly a succession of combat encounters with somewhat comical nemeses.

There are some very nice touches to the second half of the adventure. The ogre’s pigs, including Piggy, can “breathe fire”. This is because Pa Munchmeat has trained them to eat a magical item called a gourd of fire burping, which is like a weaker version of an elixir of fire breath. Another very nice touch is the inclusion of Squealy Nord, a distempered pig that the PCs ran afoul of in We Be Goblins! Squealy Nord escaped from the Licktoads, but was later caught by Pa Munchmeat.

Overall, I do like We Be Goblins Too! quite a bit. While it’s very much a retread of We Be Goblins!, with enough of a gap between playing the two adventures, it should still prove a fun a humorous diversion—a nice change of pace from an ongoing campaign.
Posted by Michael Ray Johnson at 23:06