Chronicle of the Righteous 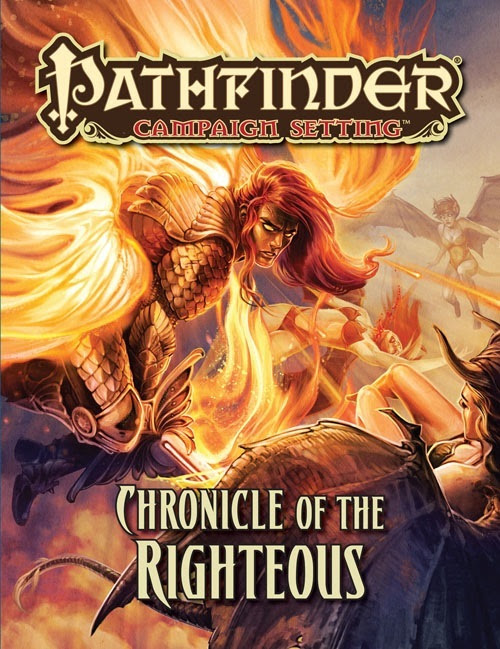 It is true that fantasy roleplaying books about non-human races tend to focus on the villainous ones. This is really not that surprising. Since the player characters are generally heroes, they need a steady supply of villains and monsters to defeat. It’s only natural that most supplements will focus on these opponents since the PCs are bound to encounter a lot of them. However, there are still good people around and the PCs need allies too. So it’s good to see a book that looks at some of the good-aligned creatures of the Pathfinder Campaign Setting.

Chronicle of the Righteous by Amber Scott is a companion book to the three-volume Book of the Damned. Those three books looked at the three main fiendish races of the outer planes. The first volume, Princes of Darkness, examined devils. Lords of Chaos, the second volume, looked at demons, and the final volume, Horsemen of the Apocalypse, looked at daemons. All three of those books provided information on the societies, hierarchies, lords, and home planes of their respective fiendish races in great detail. Chronicle of the Righteous looks at the fiends’ opposites: the celestials. In particular, it looks at the four principal celestial groups: the agathions, angels, archons, and azatas.

Now, it’s probably fairly noticeable that these four groups are all squashed together into one book, whereas the fiendish races each got a separate volume. This is no doubt due to the fact that GMs need information on villains more than they need information on heroic allies. As such, four separate volumes of Chronicle of the Righteous probably would not sell as well. However, despite having squashed so much into just one book, I dare say Chronicle of the Righteous is just as good as the best of the Book of the Damned volumes (which would be Horsemen of the Apocalypse with Princes of Darkness a close second). In particular, Chronicle manages to provide a wealth of detail on a large array of Empyreal Lords (the rulers of the celestials, equivalent in power to archdevils, demon lords, and the horsemen of the daemons), of which there has been very little detail previously available. Some have had their names mentioned here and there, but with little to no other information available. Many of the Empyreal Lords listed in this book have not even been mentioned anywhere else.


Much like the Book of the Damned, Chronicle of the Righteous is not just the name of this book, but is also the name of an in-game book, a massive tome written by the fallen angel Tabris. Long ago, Tabris was charged with chronicling the entirety of creation. In doing so, he wrote both the Chronicle of the Righteous and the Book of the Damned, and it was the fact that he covered everything, even things other celestials didn’t really want to acknowledge, that resulted in his expulsion by the lords of the Empyrean. His works were then hidden away forever. The three volumes of the Book of the Damned (the real-world books) each contain several pages in a “hand-written” font that are excerpts from the in-game Book of the Damned. I’m happy to see that tradition continue in Chronicle of the Righteous with excerpts from its in-game counterpart. It adds an extra level of flavour that a lot of other campaign setting books lack by giving an in-world perspective on the information in the book.

The first chapter is the largest in the book, providing details on 36 Empyreal Lords. Each one gets either a half-page or a full-page write-up (although the full-page write-ups also include a portrait making them actually about two thirds of a page roughly on average). Each write-up lists the Empyreal Lord’s holy symbol, typical temples, and common worshippers and minions. Each write-up also lists the Empyreal Lord’s “obedience” and granted boons, and then finishes with a general background and/or description of that Lord. Truly devout followers of the Empyreal Lords can show their devotion by taking the Celestial Obedience feat, and this is where the listed obediences come in. An obedience is a specific activity that the worshipper must perform every day in order to gain the benefit associated with that Lord. As worshippers rise in level, they can also gain additional, more powerful boons when they observe their Lords’ obediences.

There’s a huge variety among the Empyreal Lords, in their appearances, personalities, and required obediences. This variety ensures that the book doesn’t fall into the trap of presenting only one kind of good. The various Empyreal Lords showcase just how many different ways there are to interpret the three good alignments, and I think this is one of the greatest strengths of this book. There’s Arshea, the angel lord of freedom, physical beauty, and sexuality, and Damerich, the archon lord of executions, judiciousness, and responsibility. Ragathiel represents chivalry, duty, and vengeance, while Valani governs change, growth, and primal forces. Vildeis is lord of devotion, sacrifice, and scars, and requires that her devout followers ritualistically scar themselves to mark their obedience (keep in mind that obediences are meant to be observed every single day). Zohls, lord of determination, investigation, and truth, requires as her obedience that followers study an unfamiliar scene and then draw it from memory. Ragathiel requires his followers to slay an evildoer, while Picoperi requires his followers to play a practical joke on someone. Lymnieris’s followers must lie on a flat surface wearing nothing but a cowl and achieve sexual release without touching themselves. Some of the obediences are certainly much tougher than others, but this simply adds to the variety and demonstrates that some Empyreal Lords are stricter in their requirements than others. After all, devoting one’s life to Ragathiel, for example, is not something meant for just anyone.

The next chapter takes a broad look at the four celestial races in general. With a single page on each of the four, this chapter comes closest to being a disappointment. It’s the one place in Chronicle of the Righteous where the lack of space to fully describe each kind of celestial is really apparent. Since there are so many different kinds of Agathions, a single page just isn’t enough space to do all of them any justice. And since there are so many kinds of each of the other three celestial races, the same problem occurs with each of them. That said, this chapter does manage to provide a broad overview of celestials, and it is still useful.

The next chapter delves into the game mechanics dealing with celestials. This is the section that has direct application to the PCs in gamemasters’ campaigns. In particular, it looks at the worship of the Empyreal Lords. Since such worship is generally on a smaller scale, the followings aren’t as unified as the bigger religions. Instead followers come together in small groups called mystery cults. The section presents several generic types of mystery cults to help gamemasters include specific ones in their games. There are also rituals of mortification for the extra devout. By making certain self-sacrifices (refraining from eating, drinking, and sleeping) over a minimum period of time, characters gain both an affliction and a benefit for as long as they continue to maintain the ritual. The afflictions and benefits do a good job of balancing each other out, so rituals are not a useful tool for power-gaming, but rather a flavourful roleplaying addition.

This chapter also includes a new prestige class (the mystery cultist), as well as several new spells and celestial magic items. For the most part, the spells and magic items are fairly run-of-the-mill and don’t really stand out, although I can see uses for all of them. However, blood of the martyr is a particularly interesting spell. It causes the target to bleed (taking bleed damage each round), but creatures that “sup the blood of the bleeding subject” are, in turn, healed. Yes, people must consume the blood to gain its benefits (the bleeder can likewise sup her own blood to heal back some of the damage taken). The spell is an interesting twist on the usual good spells (though I should note it doesn’t actually have the “good” descriptor).

The final chapter of the book contains several new celestials, including one agathion, one archon, one azata, and two angels.

Overall, Chronicle of the Righteous is an excellent book, particularly due to its extensive list of Empyreal Lords. It helps to balance out the playing field between the forces of evil and the forces of good. While gamemasters may have less call for information on celestials than they do information on fiends, the do have some call for that information, and this book fills that niche splendidly.
Posted by Michael Ray Johnson at 22:59