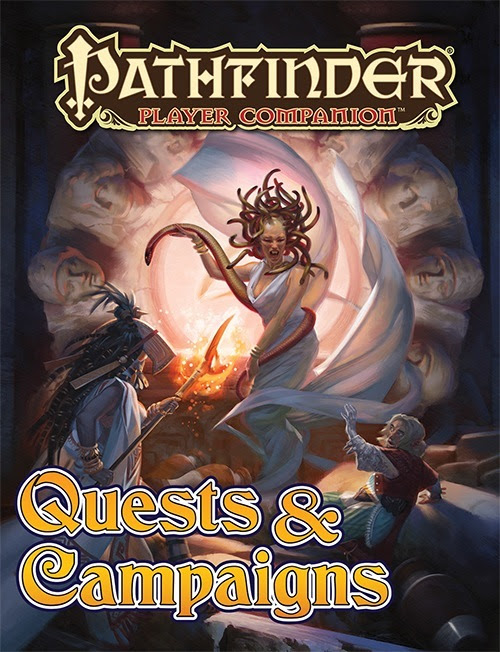 The publication of Ultimate Campaign in May opened up a wide variety of new options for gaming, from tables to help players detail their characters’ backgrounds to a complete downtime system for determining what characters do when they’re not adventuring, not to mention the kingdom building and mass combat rules. All of these are things that have only had the barest of attention (if any) paid to them in the past. But Ultimate Campaign is a generic supplement, meant to be usable with any campaign world, whether published or homebrew. As such, it is easily usable as-is with the world of Golarion. However, some people may be looking for a Golarion-specific spin to the rules and options in Ultimate Campaign and that’s where Quests & Campaigns comes in.


The front and back inside covers of the book contain additional Inner-Sea-specific background tables, including tables for nationality, ethnicity, religion, and faction. Like in Ultimate Campaign, it is possible to roll randomly on these tables to determine your character’s background, but it’s not necessary to do so. It’s perfectly acceptable to select options from the tables. Every option also includes a book and page reference (usually the Inner Sea World Guide) for further information.

The book opens with a look at the definitions of the words quest and campaign as they are used in the context of a Pathfinder game. Essentially, it boils down to a quest being equivalent to an adventure and a campaign being the entire game, including all the quests and everything that happens between. This helps ensure that there’s no confusion when the words get used frequently throughout the rest of the book. This opening chapter also includes some suggestions on how players can more effectively keep track of the details of the campaigns they are playing in, from using address books to track the NPCs, to creating family trees to keep track of their characters’ families and backgrounds.

The next section is one of the lengthiest chapters I’ve seen in any Player Companion book, running eight pages in total. These eight pages present eleven story feats (not eight as the book itself mistakenly claims on page 6), but these are more than just standard feat write-ups. Following each feat is a table of possible quests relating to the feat that players can select for their characters. Each quest is tied to specific aspect of the campaign world (and includes an Inner Sea World Guide page reference for further details). For example, the Dynasty Founder feat on page 9 contains this possible quest: “You believe that the Black Sovereign has ruled Numeria’s capital of Starfall for too long (page 145).” Four of the feats in this section are reprinted from Ultimate Compaign, but the additional quest tables show how to take that book’s generic feats and apply them directly to campaigns set in Golarion. Following these story feats are two pages of “Other Inner Sea Quests”. These quests are not tied to specific story feats, but players can use them with other story feats from Ultimate Campaign or simply as personal quests for their characters.

The centre two pages of the book contain an additional story feat, Object of Legend. The goal of this feat is to obtain a specific legendary item, such as sun orchid elixir. Instead of including a table of possible quests like in the “Story Feats” chapter, this feat includes six illustrated options for quest items along with a separate completion benefit for each one. I have to admit that several of the completion benefits for this feat are underwhelming. For example, the completion benefit for sun orchid elixir is a +2 bonus on saves against Strength, Dexterity, and Constitution damage. Unfortunately, there aren’t many situations where you actually get a saving throw against ability damage (unless you count a save against poison as a save against its damage, which does not seem to be the intent here). Creatures that inflict ability damage inflict it with just a hit. There are a few spells that the bonus could be beneficial against, but overall, it feels a very minor reward for such a major quest. Some of the other objects of legend, however (such as a linnorm head or Red Mantis hit list), provide much better benefits.

Following this is a large selection of new traits (four pages total) and new drawbacks (two pages). While traits have been in the game for some time now, drawbacks are another new feature of Ultimate Campaign. Drawbacks provide a minor penalty in return for being able to take an extra trait. I mentioned in my review of Ultimate Campaign that I tend to be wary of drawback-style systems in games like Pathfinder as they can encourage “min/maxing”. However, the penalties and the associated benefits from the extra trait really are quite minor, so there’s probably not much of a problem in this case—just so long as gamemasters enforce a maximum of one drawback. The drawbacks in Quests & Campaigns include things like Nervous (which imposes a -2 penalty when taking 10) and Sleepy (which gives a -2 penalty against sleep effects).

Although there’s a full spells chapter later in the book, one spell gets an entire chapter to itself: Ceremony. The concept of this spell is something I feel the game has really needed: a spell that is intended for use during downtime and provides a tangible, magical benefit for typical religious ceremonies like weddings and funerals. Unfortunately, as much as the concept is a needed one, I feel the execution of the spell is rather unsuccessful. There are four base ceremonies that every cleric can perform when casting this spell, plus every cleric gains an additional two ceremonies based on that cleric’s chosen domains. Each type of ceremony has its own specific benefits. However, most of these benefits have little practical use following their respective ceremonies. On top of this, the spell has an eight-hour casting time. I presume that only the cleric has to be involved for the entire eight hours; otherwise, it makes for some incredibly long weddings and funerals!

For example, in the base form of the spell, a marriage ceremony provides the subject(s) with a +1 sacred bonus on saves against fear and emotion effects for 1 hour per level. This bonus is really only useful while adventuring, but considering the spell’s casting time, it’s unlikely the marriage is happening while the characters are adventuring. It’s presumably happening during downtime. It is conceivable that the two characters getting married intend to head straight out to spend their honeymoon fighting against evil, but the duration means that, unless the ceremony is cast right outside the doors of the dungeon, the happy couple probably won’t get much use out of the bonus. When cast by a higher-level cleric, the duration may become long enough for the bonus to prove more useful, but by the time a cleric is higher level, that cleric is capable of casting other spells (with shorter casting times) that can deliver similar or even better bonuses.

The augmented version of the spell requires that the cleric spend resources (from the downtime system). Doing so changes the duration to 1 day per level and provides a greater bonus. An augmented marriage ceremony provides a +2 bonus to all saving throws. This is certainly a more useful form of the spell, but still pretty much limits the spell to adventurers intending to head out right after the funeral and go fight stuff. The spell becomes quite pointless for common people. Yes, the game is about adventurers, but the whole point of the downtime system is to detail non-adventuring activities, things that commoners can get involved in too. Rather than a spell where you spend downtime resources, I would have much preferred a spell that gives bonuses to downtime activities. Thankfully, there are spells like this later in the actual spells chapter, but ceremony just doesn’t seem to fit its intentions. After all, the spell’s chapter opens with the sentence, “The powerful forces that grant clerics their spells do not limit their aid to merely battle and exploration.” That said, to make the spell more useful as it is, I’d suggest significantly reducing the casting time down to an hour at most, possibly even ten minutes. It still means newly married couples will have to scurry as fast as they can to the dungeon, but at least they won’t waste nearly a whole day just to gain their little bonus. Nonetheless, I still can’t imagine anyone in my games using this spell much, if at all.

The actual spells chapter does include spells that affect downtime—four of them in total. There are also three spells that affect mass combat. Similarly, I was very happy to see feats that affect the systems from Ultimate Campaign. Focused Worker increases the amount of one specific capital you can gain, while Natural Ruler makes your modifier for one ability score count as +2 higher for effects that have to do with your kingdom’s attributes. While Ultimate Campaign gave the base systems, it’s nice to see options that affect or modify these systems.

Overall, Quests & Campaigns is a very useful book. My criticisms of the ceremony spell aside, the book makes an excellent companion to Ultimate Campaign, taking the new options and systems from that book and applying them specifically to the Golarion campaign world. It will help Golarion PCs gain the most out of Ultimate Campaign.
Posted by Michael Ray Johnson at 21:41