The final instalment of an adventure path brings with it high expectations. Not only does it need to present an enjoyable high-level adventure (something that can be difficult on its own), but it must also bring together all the threads of the previous five adventures to a satisfying conclusion, while accounting for the myriad different things different groups of player characters might have done along the way. All things considered, it's a rather monumental task, one that may not actually be possible to do perfectly. As such, it's perhaps not surprising that the final instalments of many adventure paths often don't seem quite as good as the instalments that came before them. They can never quite reach those lofty expectations.

The Divinity Drive by Crystal Frasier does a better job than many of reaching those unreachable goals. It's a good adventure in its own right and, as the finale of Iron Gods, it provides a suitably climactic resolution, as the player characters (hopefully) save the world from a unique and rather terrifying threat. That said, it is a surprisingly linear adventure compared to how open-ended most of Iron Gods has been (with The Choking Tower being an exception). It also comes across as something of a lengthy combat-fest, with only limited opportunity for diplomacy and roleplay. There are fewer shades of grey than in the other adventures; enemies are enemies and allies are...rare. Its more linear nature also means that it makes a number of assumptions about how the PCs have progressed through the previous adventures, and gives gamemasters little to no guidance on what to do if things have progressed differently. This is particularly unfortunate in such an open-ended adventure path. When the Ranged Tactics Toolbox first showed up on Paizo's schedule, I must admit it did not excite me. A book with new options for ranged combat in a game that already has huge numbers of options for combat did not strike me as something particularly innovative. Rather, it seemed more like...well, scraping the bottom of the barrel, to put it bluntly. Like ideas were starting to run out. The announcement of further books with “Toolbox” in the title only strengthened this impression.

After reading the book, that initial impression hasn't changed all that much. Don't get me wrong. This isn't a bad book and there are some interesting options in it. However, I do have to question what it really adds to the game, and I'm not sure I can come up with a good answer. The Player Companion books are supposedly part of the Golarion setting, and while this book has a few things keyed to certain lands and cultures, it doesn't really expand on the world much. Admittedly, this is somewhat in keeping with other Player Companion books, which have become more and more about character options than player-oriented world material. But its character options also don't really stand out amongst the myriad other options already out there. Although they are technically new, they feel more like retreads of things that have been done many times before.

It is an unfortunate fact that the more new options are added to the game, the more likely those options will end up never used. I find this particularly true of the Player Companion books. With a few notable exceptions, after an initial reading, the vast majority of them end up sitting on my shelf and never touched again—except when sifting through to look for one of those few exceptions, and then it's only to move them out of the way. I suspect Ranged Tactics Toolbox, despite what interesting things it does have, will end up being one of those never used books.

Of course, many people out there don't own every book and there will certainly be people for whom Ranged Tactics Toolbox may be the only book beyond the core Pathfinder books they own. Such people may well get quite a lot of use out of the book. I think it's important to keep this in mind, and I try to review products from both the perspective of how they work on their own separate from all other products, and how they fit into the larger whole. And that's why I say Ranged Tactics Toolbox isn't a bad book. It certainly has good and interesting things when looked at by itself. It's just that, when viewed as part of the larger whole, it kind of vanishes in the sea of options.

Read more »
Posted by Michael Ray Johnson at 15:17 No comments: 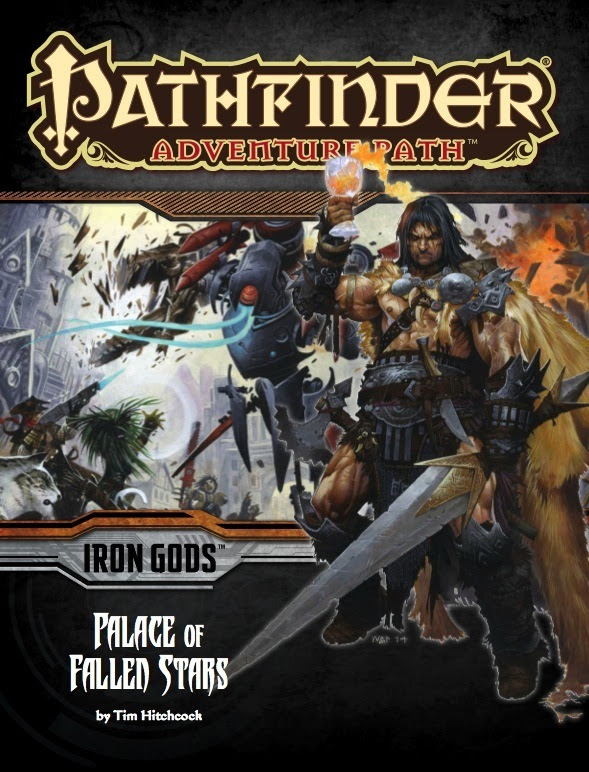 One of the things that has really struck me about the Iron Gods Adventure Path is how PC-driven it is. A lot of adventures and adventure paths follow the model where an NPC or group of NPCs hires the PCs or otherwise sets them on their path. In an adventure path, these NPCs often continue to reappear from one instalment to the next, helping to guide the PCs to their next destination. Of course, this isn't universally true and the degree to which it occurs varies from one adventure or AP to another. However, it tends to be true to some extent. Alternatively, various events will occur that push or direct PCs along a certain course of action.

With Iron Gods, however, the PCs have had to be mostly self-motivating. They still encounter NPC allies, of course, but these allies don't really direct the PCs in any way. Fires of Creation has an initial set-up to draw the PCs in, but after that, they're pretty much on their own. Each instalment relies on the PCs deciding on their own to head into the next. This is particularly true of Lords of Rust and Valley of the Brain Collectors, but even The Choking Tower, the least sandboxy of this AP so far, still relies on the PCs' self-motivation to get started. The fifth instalment, Palace of Fallen Stars by Tim Hitchcock is also no exception. Of course, by this point, the PCs are probably quite invested in seeing things through to the very end. Motivating themselves shouldn't be that difficult.

Like Lords of Rust and Valley of the Brain Collectors before it, Palace of Fallen Stars is very much a sandbox adventure. How things play out is almost entirely dependent on the actions of the PCs, from the order of events, to their results, to which NPCs live and which die. It's even technically possible to bypass this adventure and jump to the sixth one before coming back and completing this one (albeit, that way would likely be considerably deadlier). The text does a good job of accounting for the many different possibilities and for how NPCs might react, while never forcing any particular path. All in all, it makes for a very good adventure, one that's going to be very different for every group that plays it.

Read more »
Posted by Michael Ray Johnson at 21:47 No comments: