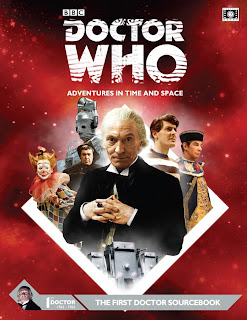 This book is not what I expected. To be honest, however, I’m not entirely sure what I expected. I figured there would be information on the first Doctor and all his companions, probably also the key aliens and villains from that era. There would probably also be advice about playing during the first Doctor’s time along with some adventure ideas. Most of these things are present in The First Doctor Sourcebook, but they take up only a very small portion (maybe 30 pages or so total) of the book. Beyond these things, I don’t really know what I expected, but I certainly didn’t expect what the book delivers. The vast majority of this 160-page book is devoted to presenting each of the first Doctor’s television stories as adventures that people can play out in their Doctor Who: Adventures in Time and Space games.

There are a lot of different ways you can play Adventures in Time and Space. You can play as one of the Doctors and any of his companions. You can create unique companions to travel with the Doctor. Or you can create your own original Time Lord characters to use instead of the Doctor. Alternatively, you can play the game without a Time Lord at all and have an all-human group, perhaps a UNIT or Torchwood group, or a group of time agents from the 51st century. There are limitless possibilities, but one possibility I never once considered was playing out a television story as a game adventure. And honestly, after reading the book, I would still never consider it.


The very first things that came to mind upon discovering “An Unearthly Child: The Adventure” were the endless problems that could be encountered with such a campaign. First off, the gamemaster and players need to be willing to let the adventure play out differently to the television episodes. There’s little point in trying to slavishly recreate exactly what happened on screen—might as well just sit down and watch the episode in such a case (or listen to the audio if it’s a missing story). Unfortunately, there is a kind of player (or gamemaster) out there who will complain whenever something happens differently and will insist that the “correct” thing happens. At the other extreme, however, there is also a kind of player who will do everything in his or her power to make sure things play out as differently as possible. Rather than let things happen naturally, this kind of player will do something for no other reason than it’s the opposite of what happened in the television episode. Admittedly, this is a player problem, not really a problem with the adventure, but it’s something that gamemasters and players need to be aware of. Even the best and most cooperative players and gamemasters will still likely compare in their heads what is happening in the game with what happens in the television episode, and this can subconsciously affect their actions. I suppose the best way to play a television story as an adventure is to have a gamemaster who is fully familiar with the television story, but players who have no knowledge of it at all. This also likely means the players are not very familiar with the first Doctor or his companions, in turn meaning that the characters could end up very different from their television counterparts. The GM should certainly let that happen; however, it then begs the question of why play with the first Doctor and his companions at all? Why not just create new characters and new adventures?

To be fair, The First Doctor Sourcebook does not in any way suggest that these stories should slavishly follow the TV scripts. Indeed, it advises the exact opposite, that gamemasters should let the adventures play out in whatever way the players take them. Many of the adventures even offer suggestions of things to change about the original story. Nonetheless, I still find the entire set-up problematic and ultimately self-defeating. As a one-off, it might be interesting to run an adventure based on a TV story, but as a long-term campaign, I just can’t see it working. There’s a big difference between what makes a good story and what makes a good game adventure. An adventure needs to be more open-ended than a story. NPC actions need to change and adjust based on what the PCs do rather than follow a set script or plotline. It’s also much more difficult to split characters up in an adventure than in a story (and splitting up is pretty common in Doctor Who stories), so the adventure has to allow for the characters spending most of the time together. To account for these things, gamemasters need to change the TV stories in some way, sometimes quite significantly, but then, is it really still the same story? If I were to run a campaign where the players were playing the first Doctor and his companions, I would run original adventures set between the television stories. While many of the stories of this period ran directly into the next, there are nevertheless several gaps where you can place new stories. Novels have been doing this for years. No reason game adventures can’t.

Now, the problems and logistics of running a TV story as an adventure aside, there are a number of other problems I have with Chapters Two through Ten (the TV story adventure chapters) of The First Doctor Sourcebook. Scattered throughout these adventures, there is actually a selection of fairly good advice regarding designing adventures. As you read through these chapters, you begin to realize that they are more than just a selection of adventures to play through. They also constitute a guide on how to design an adventure. That’s all well and good, except finding particular kinds of advice can be very difficult. Few people read gaming books all the way through. People tend to read only the sections of immediate interest. This is particularly true of books that contain a compilation of adventures. While readers might skim all the adventures, they’ll often only fully read the ones they’re actually interested in running. As such, they’re not going to see all the advice. Worse, some of the advice shows up in locations you wouldn’t necessarily expect it to. For example, advice on naming your adventure is in “The Savages”. Anyone looking for that kind of advice has no reason to expect to find it there or in any other story.

I was also rather surprised that, although the first Doctor’s and his companions’ game statistics are included, there is only a very brief discussion of the Doctor’s character and personality in Chapter One and no discussion of his companions’ characters (apart from a couple of lines of personality and background on their character sheets). To be able to play in the first Doctor’s era, it would seem to me that a look at the relationships of the Doctor and his companions would be an extremely important thing.

I also have problems with the writing itself in this book. The Synopsis section of each story-adventure is in the past tense. It’s much more standard to write synopses in the present (what is called the narrative present). It’s all the more jarring here because the remainder of each story-adventure reverts to present tense. There are also a couple of occasions where the writer suddenly switches to first person even though the vast majority of the book is not in first person. One occurs in Chapter One on page 8: “The Doctor tries to drop Ian and Barbara off in 1966, and the closest he gets is the Reign of Terror in France. He has many excuses—I’m sorry, there are many reasons for this inaccuracy.” Another occurs on page 33 in “Marco Polo”:

These sudden changes to first person (particularly the second example) jar heavily with the style of the rest of the book. Finally, the writer is unable to decide between “an historical” and “a historical”. Both are used throughout the book and the lack of consistency is annoying. 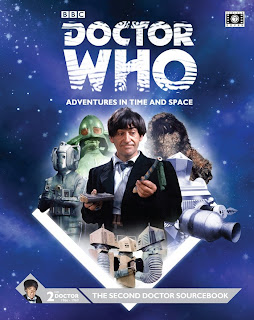 The Second Doctor Sourcebook is now available but I haven’t purchased it yet. The completist in me says I’ll probably get it eventually, but if it follows the same format as The First Doctor Sourcebook, that probably won’t be for quite a while yet. Perhaps not at all (which also means you shouldn’t expect a review of it from me any time soon). Overall, The First Doctor Sourcebook is a book that is almost entirely useless to me, and I’m having a hard time imagining much use for other people. People unfamiliar with the first Doctor won’t actually learn a great deal about him or his companions. They can get a vague idea of the types of stories from the period and if they read every story-adventure thoroughly, they could pull out some useful advice on adventure design, but that advice is too scattered for anyone looking for anything specific. I can’t help but think that the biggest problem with this book is the length. Trying to spread everything out over 160 pages means having to add in a lot of filler, and that results in the decent information getting lost amongst it. Ultimately, I think it was a bad idea to try to do separate sourcebooks (especially of this length) for each Doctor. (I have no idea what they’ll do with the eighth Doctor, who only has one television adventure and, to the best of my knowledge, Cubicle 7’s license doesn’t extend to the audio adventures and books.) It would have been better to do a single book about the Doctor, with each incarnation getting its own chapter. Drop the stories-as-adventures idea and focus on discussing who the Doctor and his companions are. Discuss their history and relationships and provide some ideas for new adventures with those Doctors and companions. As it is, a separate book for each Doctor just isn’t worth it.
Posted by Michael Ray Johnson at 00:17