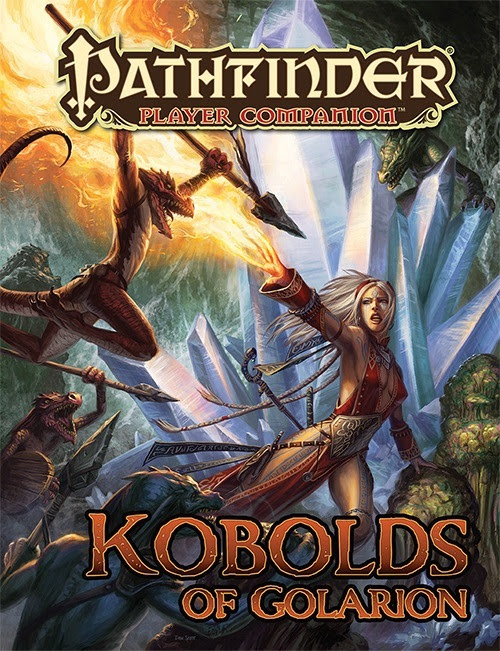 Kobolds have always been one of my favourite “low-level” monsters. There’s something appealing about small, physically weak creatures that succeed through cunning and sheer force of numbers. And despite their status of being adversaries for low-level parties, it’s also possible to slap a few class levels onto them once in a while and challenge higher-level groups, making them quite versatile monsters. So it was with some anticipation that I opened up Kobolds of Golarion and dove right in.

I have to say that Kobolds of Golarion is a delight to read. It’s both informative and entertaining. It provides an illuminating insight into the kobold mindset and society, while also providing a wide range of new options for kobold characters, many of which can easily be used with non-kobolds as well. As a Player Companion, the book is unsurprisingly geared towards options for using kobolds as player characters, but the material is equally usable for NPCs, making this an extremely useful resource for GMs too, even GMs who aren’t fond of the idea of players running monster races as characters. These new options take the form of archetypes, traits, feats, spells, and so on. Most importantly, the book is loaded with new options for traps—the things kobolds are well known for being masters at creating.


There’s a lightness to the writing in the book that fits perfectly with the general feel of kobolds. Kobolds take themselves seriously, of course, but their actions often cause others not to, and the writing plays into that dichotomy. The initial few chapters look at the basics of being a kobold, from psychology to physiology to culture. They give in-depth detail here but with a light touch that provides a hint of humour while simultaneously conveying the feel of what it’s like to be a kobold. The section “Five Facts About Kobolds”, in particular, really sets the mood for the entire book to come. In explaining Fact 1: “Kobolds are Dragons”, it says, “Just ask any kobold—she’ll tell you...” The final fact, “Kobolds Taste Terrible”, opens with “This is best taken on faith.” As silly seeming as that final fact may be though, it has a very good purpose for being there. It explains how kobolds have managed to survive with so many more powerful predators around them. Those other predators just have no reason to dine on kobolds. One of the best insights into kobold nature, however, is the presentation of three different kobold creation myths. Although these constitute just a short sidebar, their presence adds more realism to kobolds as a whole and shows that kobolds are not a monolithic race, but rather one with a wide diversity of viewpoints and lifestyles. The book further expands the diversity by then taking a look at the prominent kobold tribes across the Inner Sea Region.

Amidst the background information in the opening chapters (and a very cute illustration of a kobold hatchling on page 6), there is also a sizeable collection of alternate racial traits (the kind where you get to swap out standard kobold abilities for different ones) and regional traits (the kind of traits that are minor feats) that can help players further diversify their characters. Later in the book, there is also a chapter on “Coloration” that presents a number of race traits (not to be confused with the previously mentioned racial traits—this is one area where Pathfinder really needs more distinct terminology) players can select based on the colour of their kobolds’ scales (which have the same variation as chromatic dragons—black, blue, green, red, and white being the most common).

The centre two pages of the book contain an in-world map drawn by Xanjak Ant-Caller of the Embermaw Clan (with annotations by a kobold with the initial J). While this map may not be particularly useful for any games not involving the Embermaw Clan (and really, GMs can easily make it for some other clan if they want), what it does do is provide another insight into kobolds themselves. The annotations, in particular, add a great deal of flavour: “Hey Xan, good map! I wrote in some things to fix it! —J.”

Naturally, a significant portion of Kobolds of Golarion focuses on traps. The book reintroduces ranger traps, which first appeared in Ultimate Magic, and presents several new ranger traps for characters to learn. There’s a large variety of traps here, which could potentially add a great deal of versatility to characters. Unfortunately, the Learn Ranger Trap feat (reprinted here from Ultimate Magic) only allows characters to learn a single trap, which has always been a bit of a problem with the system. There are lots of ranger traps to choose from, but characters can only ever learn one. Kobolds of Golarion introduces a new feat, Improved Learn Ranger Trap, which allows characters to learn another trap (and allows non-rangers to create supernatural traps), but that still only brings the total known to two (although the snare setter rogue archetype in this book and the trapper ranger archetype from Ultimate Magic can expand that number a bit). I’ve never actually had anyone in my games play a character interested in learning ranger traps, so it’s hard to say just how this would affect things, but I’d be inclined to allow characters to take Learn Ranger Trap multiple times if they want (as long as they have the feat slots). Of course, characters can always use the Craft skill to create more elaborate traps, so maybe it’s a moot point.

To go along with the new trap-making abilities in the book, there are also a number of trap accessories in the “Equipment” chapter. I particularly love decoy triggers, which actually lower the Perception DC for finding the traps they are attached to—except if searchers don’t meet the original DC, they actually only find the decoy trigger. Then, if they try to disable the decoy, they can end up setting off the actual trap! The chapter also contains lures (items like fake coins that, from a distance, look valuable and goad people into entering a trapped area), trapped items (like a trapped scroll case that is filled with toxic poison), and new alchemical items.

As well as trap-related abilities and equipment, Kobolds of Golarion also contains quite a few new feats, spell, and magic items. In addition to the snare setter archetype mentioned above, there are also two other archetypes: the dragon herald (for bards) and the swarm-fighter (for fighters). Amongst the feats is a new chain of style feats for Kobold Style. Fitting with kobolds’ tendency to fight in large groups, there are also two new teamwork feats: Tribe Mentality lets you share your saving throw results with an ally and Wall of Flesh lets you consider yourself one size category larger for determining your CMD provided you are adjacent to an ally with the feat.

There is one odd, but rather amusing error in the book. The “Archetypes” chapter opens with the following lines:

To promote good, it’s necessary to crush evil—sometimes by coming to the defence of threatened innocents and sometimes more actively. Those who dedicate their lives to these goals sacrifice personal safety and peace in the name of good.

When I first read these lines, I did a bit of a double-take and had to read them again. Kobolds aren’t really known for promoting good. Still, I thought maybe it would be clearer once I’d read the archetypes. But no, the archetypes have nothing to do with promoting good. Nevertheless, there was something familiar about these lines, and a possible explanation crossed my mind. It only took a little bit of searching as it seemed fairly obvious where these lines might actually have come from. Sure enough, these exact same sentences open up the chapter, “Fighting the Good Fight” in Champions of Purity, the Player Companion published immediately before Kobolds of Golarion. In both books, these lines appear in the same spot at the top of page 22. It would seem that Paizo uses a standard template for these books and someone forgot to edit out the previous lines and insert whatever was supposed to be there. Oh well.

One small, amusing error aside, Kobolds of Golarion is a wonderful book. Not only does it provide players with a wealth of options to make interesting and diverse kobold characters, but it also provides both players and GMs with a vivid look into the psyche of this popular monster race. Readers will come away from the book with a deep understanding of kobolds and a desire to use more of them in their games.
Posted by Michael Ray Johnson at 23:07