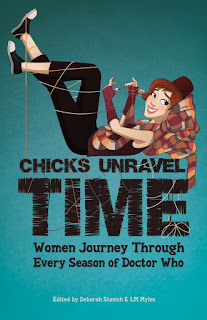 When I posted my review of Chicks Dig Time Lords, I mentioned that I had originally hoped to post it along with a review of its follow-up, Chicks Unravel Time: Women Journey Through Every Season of Doctor Who, but unfortunately I had not yet been able to find a copy of Chicks Unravel Time. Well, not long after posting that review, my order from Amazon finally came through and my copy arrived. I then had to find time to read it amidst a busy schedule that has culminated in a bout with the flu (thus my slowness with posting, in general, in the last couple weeks). But at last the reading is done and I have to say that the wait for the book was well worth it.

As much as I enjoyed Chicks Dig Time Lords, I enjoyed Chicks Unravel Time a great deal more. At the basic conceptual level, the two books are very similar: a group of women authors write essays about Doctor Who. But whereas Chicks Dig Time Lords meanders about with numerous different styles and topics—from reminiscences to the position of women in fandom to critical analysis—and a few interviews, Chicks Unravel Time benefits from a more focused approach. Each essay examines one season (or one aspect of a season) from a critical lens. There is exactly one essay for each of Seasons One through Twenty-Six, the 1996 television movie, Series One through Six, and the 2009 specials (in the gap year between series four and five). With its more analytical bent, there is a lot less reminiscing in these essays and a lot fewer anecdotal stories. That’s not to say that such things are bad. I enjoyed the reminiscences in Chicks Dig Time Lords a lot. They were both entertaining and informative. But my natural preferences lean more towards analysis (just look at what I do on this site, after all) and, as such, I think I got just a little more out of the essays in Chicks Unravel Time. Of course, that doesn’t mean that these authors never do any reminiscing. Quite a bit does indeed show up, but it’s always in a manner that’s contextual to the topic of the essay.
Read more »
Posted by Michael Ray Johnson at 23:42 No comments:

Email ThisBlogThis!Share to TwitterShare to FacebookShare to Pinterest
Labels: Books, Doctor Who, Reviews 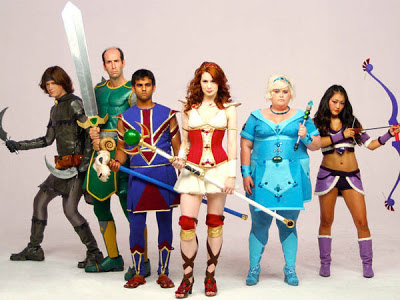 Believe it or not, I only discovered The Guild just after season 5 came out. Somehow I had remained completely unaware of its existence until then. It’s odd because many of my friends apparently knew of it.

“What, you’d never seen The Guild before?” they asked when I mentioned finally seeing it.
“No,” I replied.
“You mean we’ve never mentioned it before?”
“No.”
“Really?”
“Really.”


It’s odd, too, because many websites I often visit are exactly the kinds of sites that would mention it, but if they did, I somehow missed every reference. At any rate, it was after season 5 came out that I finally started noticing mentions here and there of a web show called The Guild and starring Felicia Day. I certainly knew who Felicia Day was, so I was intrigued and checked it out, starting right at the beginning with season 1.

And I was hooked. Soon, I had not only watched the whole series, but I had also purchased the DVDs of all five seasons (to be fair, watching a whole season is about the same time commitment as watching a single movie, so it’s not that amazing a feat that I got through the whole series in about a week or so). The series was a wonderful breath of fresh air, full of funny characters who, while crazy and over-the-top, were still relatable. Here was a show about geeks and written by geeks, a show that could poke fun at the idiosyncrasies and stereotypes of geek culture whilst never hiding the fact that it was also a love letter to geek culture. Shows about geeks have gained a certain popularity in recent years with the rise of programmes like The Big Bang Theory. But that show, while about nerds, is aimed at the masses, and is clearly written by people who don’t really understand what it is to be a geek or nerd and so rely entirely on stereotypes. Felicia Day, on the other hand, is a geek of the first order, and that breathes a life and reality into The Guild that the Big Bang Theory can only dream of attaining.
Read more »
Posted by Michael Ray Johnson at 22:40 No comments:

Email ThisBlogThis!Share to TwitterShare to FacebookShare to Pinterest
Labels: Geek and Sundry, Reviews, The Guild

Mention the name, Cthulhu, in a room full of geeks, and the conversation will instantly turn to talk of “Outer Ones” and “Great Old Ones”, as well as various other nightmarish creatures, all taken from the works of H.P. Lovecraft. Lovecraft's writing has certainly influenced much fantasy (and even some science fiction) that has come after it, and roleplaying games have been no exception. The Pathfinder campaign setting of Golarion has many of these Lovecraftian elements hard-wired right into the setting, from the Outer Beings to the nightmare realm of Leng. Many Pathfinder adventures have featured beings out of Lovecraft stories, from the hounds of Tindalos to Leng spiders and more. The fifth adventure of Shattered Star, Into the Nightmare Rift by Richard Pett, is one such adventure, and it is more overt than most others as it takes the PCs into Leng itself.

I must confess that I haven’t actually read much Lovecraft (my geek cred just went way down, I suppose). However, I have learned about many of the concepts through other sources and I find them endlessly fascinating. So it’s perhaps a bit strange that Into the Nightmare Rift doesn’t quite do it for me. It’s a competent dungeon crawl, but therein lies some of the problem, I think. A dungeon crawl doesn’t feel the right style to do such a nightmarish reality justice. Going from room to room, killing monster after monster (which is what a great deal of this adventure is) doesn’t really allow for a building of dread and suspense, which I feel is really needed (especially for something with the word nightmare in the title).

That said, I should stress that I don’t consider this a bad adventure. My problems with it mostly come down to personal taste. In this respect, it’s similar to Shards of Sin, the first part of Shattered Star, in that it’s a competent, well-designed dungeon that just doesn’t grab my attention all that much. Nonetheless, it’s an adventure that probably many people are going to love because it will grab their attention.

Reign of Winter: A Look Ahead

Generally, I write about Pathfinder products after they're published, not before. After all, I can't review something that I haven't read. However, this caught my attention, and I just felt I had to post about it. The Shattered Star Adventure Path comes to a close later this month (and expect my review of part 5, Into the Nightmare Rift very soon). Up next is Reign of Winter, dealing with the change of rulership that happens every 100 years in the icy realm of Irrisen, when Baba Yaga returns to place a new daughter on the throne.

We've known for some time that the fifth part of this adventure path would be titled, Rasputin Must Die! There has been much speculation about this title. Baba Yaga is a real-world mythological figure with a firm presence in the fictional world of Golarion. Could the Rasputin of the title be the real-world Rasputin? Well, at long last, Paizo has officially announced Rasputin Must Die!, and along with it an official synopsis (see the link for the synopsis).

Yes, the Pathfinder Adventure Path is going to Earth during World War I.

I want to run this adventure path, and I haven't even read it. That's pretty impressive, Paizo.