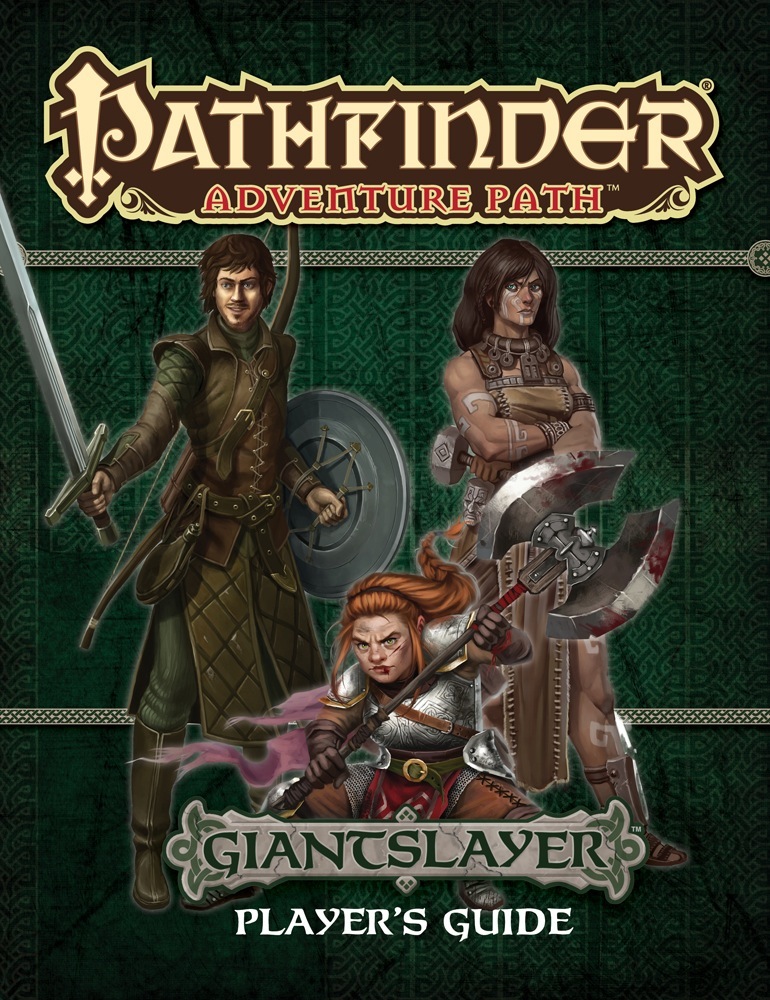 In order to get an adventure path going, the players need characters, and ideally, they’ll create characters that are suited for the particular adventure path they’ll be undertaking—characters who come from the appropriate region(s), and have relevant skills and abilities. In the case of the Giantslayer Adventure Path, they should come from the town of Trunau in Belkzen or have a reason for being in Trunau, and they should be interested in fighting giants.

The Giantslayer Player’s Guide provides players with the tools they need to create such characters. And it does a reasonably good job. One of the difficulties adventure path player’s guides can encounter is providing enough information to let players create characters appropriate to the entire campaign—not just the opening—while not giving away too much about later parts of the campaign. In the case of Giantslayer, this means making it clear that the PCs will be fighting giants (it’s in the name of the adventure path, so it shouldn’t come as much of a surprise to the players even though it may be to the characters) and that they will be travelling through the Mindspin Mountains.

Like most adventure path player’s guides, the Giantslayer Player’s Guide opens with a brief overview of the campaign. This includes some suggestions on how the characters might already know or come to know each other. It then moves on to some basic character tips, including suggested archetypes, animal companions, bloodlines, favoured enemies, and so on. Since it’s not mandatory that PCs come from Trunau (although it is strongly recommended that at least one come from Trunau), it also includes a section on possible nearby places of origin.

Read more »
Posted by Michael Ray Johnson at 12:17 No comments: 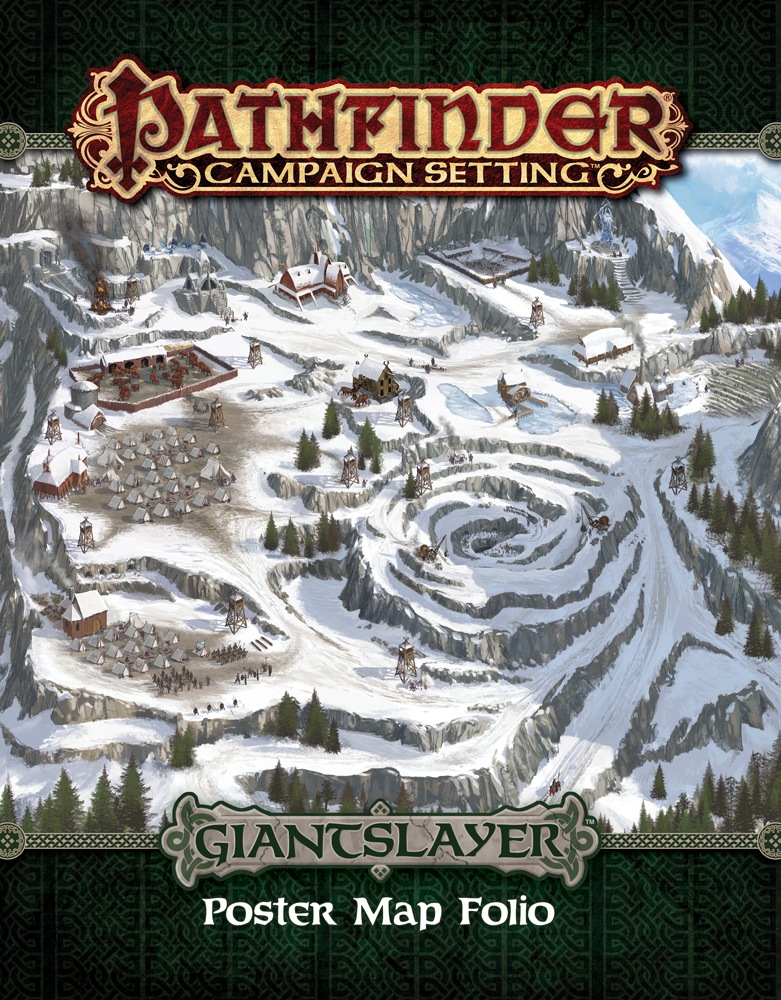 I can never have too many maps in my games. Particularly the big ones. I love unfolding them, laying them out on the table, and pointing to one location or another. I love the context they provide for where things are happening in the game world. And sometimes, they’re just pretty to look at. As such, I appreciate the map folios that come out for each adventure path. They help me get my fix of pointing at maps. They’re also generally useful for any games set in the same region, not just the adventure paths in their name.

The third map in an adventure path map folio tends to be a more artistic piece. Often, it’s a map of a country or region done in the style of a map the characters in the game might actually purchase and use, rather than one designed for gaming purposes. In this folio, it is a map of Skirgaard, the location of the fourth adventure. In this case, it’s more than just a map; it’s also an illustration of the entire village. Skirgaard is a small enough location that it’s possible to not just show where each individual location is, but to also sketch out every location in detail, complete with people moving about and smoke rising from chimneys. The map shows the village from the vantage point of a little bit above and to the south. When PCs arrive at the village, GMs no longer need to describe what they see. Instead, they can just show the map and say, “This is what you see.” The map is breathtakingly beautiful to look at, and I think it’s probably my favourite of all the artistic maps in all the adventure path map folios.

The Giantslayer Poster Map Folio makes a great addition to a Giantslayer campaign, and to any campaign set in Trunau and/or the Mindspin Mountains.

Posted by Michael Ray Johnson at 12:04 No comments:

Doctor Who - The Tsuranga Conundrum

Doctor Who episodes can run the gamut from serious to funny, dramatic to silly, joyous to sad, terrifying, exciting, emotional—heck, sometimes even a little boring. This isn’t just a change from one episode to the next. Doctor Who frequently mixes many or all these things into a single episode. It doesn’t always work, but when it does, the results can be incredibly fun. And that’s the best way I can sum up “The Tsuranga Conundrum” by Chris Chibnall: fun. It’s fast-paced, tense, funny, silly at points, and just plain fun. I love every moment of it, from beginning to end.

Read more »
Posted by Michael Ray Johnson at 02:52 No comments:

Email ThisBlogThis!Share to TwitterShare to FacebookShare to Pinterest
Labels: Doctor Who, Doctor Who Series 11, Reviews

Doctor Who - Arachnids in the UK 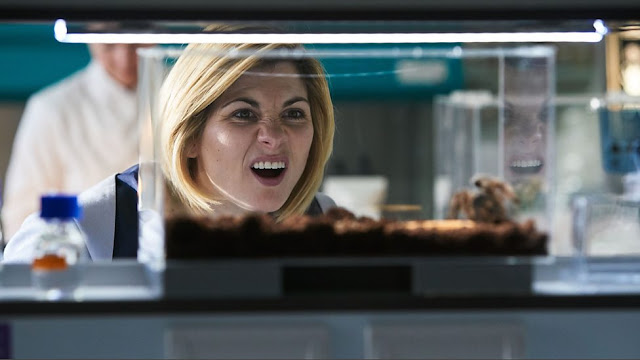 One thing Doctor Who is well known for is including lots of creepy chills and scares. This week’s episode is the kind that gives the show that reputation. Just in time for Hallowe’en, “Arachnids in the UK” presents us with giant spiders creeping out from under people’s beds, crawling along dark corridors, and spinning lots and lots of webs. It’s the kind of episode arachnophobes might want to avoid. In true Doctor Who fashion, however, the episode also provides moments of humour to soften the terror, and lots of great character moments.

Coming immediately after the incredible heights of “Rosa”, it’s not surprising that “Arachnids in the UK” does not reach those same heights, but it’s still a highly enjoyable episode. Unfortunately, it does have a somewhat weak resolution, which can make it feel a bit disappointing, especially in comparison to “Rosa”. However, the resolution aside, the episode has many great strengths, particularly the initial build-up of threat and the characters, which include our first introduction to Yasmin’s family. Overall, I’d say it’s my least favourite episode of Series 11 so far, but considering how strong the series has been, this does not make it a bad episode at all.

Read more »
Posted by Michael Ray Johnson at 03:55 No comments: