And so, another month has come and gone. July was my most productive month for the blog in some time. I mentioned last month that I had fallen behind on Pathfinder reviews. This month, I began the task of getting caught up with reviews of Chronicle of the Righteous, We Be Goblins Too!, Rasputin Must Die!, Fey Revisited, Kobolds of Golarion, and Quests & Campaigns. There’s still quite a bit more to get through, but it’s a good start. Next up is a review of Castles of the Inner Sea. Expect that in the next day or two.

On top of those Pathfinder reviews, I also delved into reviews of the latest releases for the Doctor Who: Adventures in Time and Space game. Two of them, The Time Traveller’s Companion and Defending the Earth: The UNIT Sourcebook, were first announced a few years ago and finally saw release in the last few months. Luckily, they were well worth the wait. Unfortunately, I was quite disappointed with The First Doctor Sourcebook and that has dampened my enthusiasm for getting any of the books dealing with the other Doctors (of which The Second Doctor Sourcebook is already available). If I do eventually get them, I’ll review them here, but it may be a long wait.

Outside of roleplaying reviews, there wasn’t a lot happening this month. No television reviews. I haven’t been watching anything recently. There are several things I do want to check out (particularly Orphan Black) but I just haven’t had the time, unfortunately.

Even though I’m not primarily a news site, I do occasionally report news that catches my interest. This month there was the intriguing news that the Doctor Who 50th Anniversary Special is going to be simulcast worldwide. There was also the opening of the York Maze, which this year is shaped like a Dalek. Finally, there was the first preview of Neil deGrasse Tyson’s new Cosmos series. Carl Sagan’s original is a brilliant work, and I am eagerly looking forward to this new one.

My reviews on this site tend to be quite in-depth. I like to look at every aspect (well, as many as possible) of things and critically analyse them to best of my ability. However, this does take time and it means that some things I might like to review I end up not reviewing because I just can’t fit them into my schedule. So I’ve decided, every once in a while, to write a few short, quick reviews and gather them into one post, just to draw people’s attention to their existence. I thought I’d start with a look at a couple of RPG periodicals that I find particularly good and useful.

First up is Wayfinder. This free fanzine is published biannually under the Pathfinder Community Use Policy. The most recent issue, #9, was released earlier this month. The magazine is made by Paizo Fans United and bills itself as a “Pathfinder Fanzine made by Fans for Fans”. Although it’s fan-produced, it often has forewords or even articles written by Paizo staff and/or writers. Each issue contains a staggering array of articles, new optional rules ideas, and short adventures, as well as fiction and artwork. The latest issue focuses on the Darklands of Golarion and contains things like new drow magic items, the secretkeeper prestige class, and more. As with any publication with a large number of authors, there is some variability in the quality of different articles, but for the most part, articles are well-written and enjoyable. 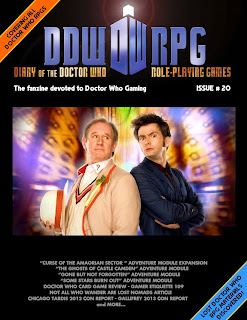 For players and gamemasters (primarily gamemasters) of any of the various Doctor Who roleplaying games, there is the Diary of the Doctor Who Role-Playing Games published by the Earthbound Timelords. This fanzine often contains reviews of Doctor Who merchandise as well as convention reports. However, its main focus is on adventures and gamemaster advice for roleplaying in the worlds of Doctor Who. All three Doctor Who games (FASA’s game from the 80’s, Virgin’s Time Lord, and the latest game from Cubicle 7) get attention in the magazine with most articles providing stats for all three versions. The FASA game does tend to get a little more attention, as the authors and publishers have long-lasting campaigns dating back to when the FASA game was the only one available and thus have done a lot of work of their own on that game. Nevertheless, the fact that Doctor Who games tend to be more narrative-based than mechanics-based means that just about everything is easily used with any version of the game.

Every issue contains several adventures, some fully detailed and some shorter synopses that GMs can expand as they please. The more detailed adventures often fall into the trap that a lot of Doctor Who roleplaying adventures fall into—that of assuming certain outcomes to various events. I’ve run a few of their adventures in the past, and I’ve found the best ones are often the less-detailed ones since there’s more leeway there for players going off in all sorts of unexpected directions. Nevertheless, one thing all the adventures are great for is providing creative ideas and concepts.

Diary of the Doctor Who Role-Playing Games used to come out roughly once every month. However, the last few issues have had very long delays. There was a four-month gap between issues 18 and 19, and then a nine-month gap before the most recent issue 20 came out this month. Until 20 showed up out of the blue, I had actually pretty much given up hope that there would be any more issues. I’m not sure what this means regarding the frequency of future issues. However, all twenty currently existing issues are still available for free download and I highly recommend them.
Posted by Michael Ray Johnson at 20:59