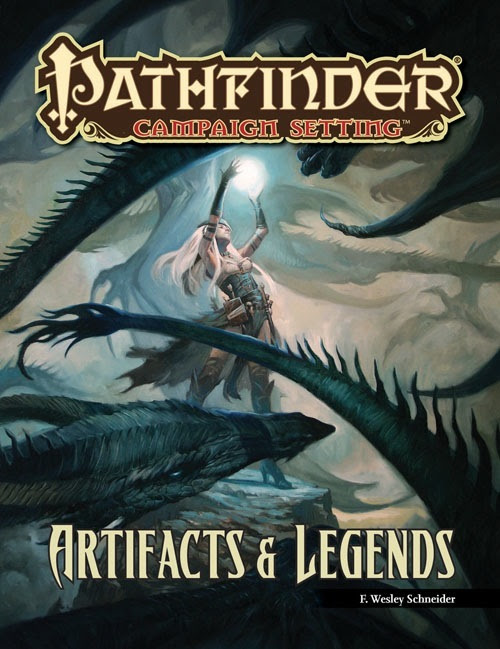 Since the earliest days of Dungeons and Dragons, there have been magic items with powers well beyond what most magic items have. Known as artifacts, these items have often become focal points of entire campaigns. Player characters have taken on grand quests to acquire or destroy one or more of them. Many are now considered an iconic part of the game and hold a special place in the memories and hearts of gamers everywhere. Nonetheless, the Pathfinder Roleplaying Game has not done a lot with artifacts so far. The Core Rulebook contains stats for many of the most famous (open content) ones, and some Golarion sourcebooks have introduced a few Golarion-specific artifacts (some with more information than others), but with Artifacts & Legends, the Pathfinder RPG takes its first concerted look at these world-changing and game-changing items.

At first glance, one might wonder about the “& Legends” part of the title as, apart from a brief introduction on “Artifacts in Your Game”, the book is packed front-to-back with descriptions of artifacts. There’s no section of the book on legends. However, on closer examination, it becomes clearer that the legends are the artifacts themselves. After all, these are items that spawn tales about them all across the game world, and so the full title of Artifacts and Legends is most apt for this book.


The opening section on “Artifacts in Your Game” contains rules for researching artifacts, ways that PCs can learn the powers and abilities of artifacts, their histories, and possibly even their methods of destruction. Also included in this section is a short list of “metagame artifacts” and their powers. I must admit, I got a good laugh out of this section. While metagame artifacts are not things I am ever likely to use in my own games, I can think of a few past games I was a player in where I would have really liked to have seen one or more of these items show up. Metamagic artifacts are items that provide an in-game explanation for the strange things that happen due to real-world events. One example is when players are absent from a session. In my own games, if a player is absent, I will generally control that player’s character as an NPC. My players generally trust me to play their characters appropriately and not have them behave out-of-character (they’ve all seen me play someone else’s character at some point or other and so have seen that I can do this competently). For many GMs though, having to control a PC as well as all the game’s regular NPCs and monsters can be too much extra work. Many of these GMs will allow another player to control the missing player’s character. However, another common tactic is simply to ignore the character of the missing player. That character, to all intents and purposes, simply vanishes, only to reappear next session when the player is back. I’ve played in more than a few campaigns that have done this, and it has always bugged me no end. When I question what happens to the character during the player’s absence, the response is usually along the lines of “Who cares? It’s not important.” Alas, to me, it is important as it ruins my immersion in the game world, and I would have given anything for the metagame artifact called the scar of destiny. The bearer of a scar of destiny occasionally fades out of existence for varying periods of time (not coincidentally coinciding with a player’s absence). Make no mistake, it’s a patch that only covers up the problem rather than solves it, but it does provide an in-game explanation for this annoying situation. Other metagame artifacts help explain missing familiars and animal companions (because the players forgot about them), characters whose abilities suddenly change (because the player or GM didn’t like the original build so have redesigned the character), and the mysterious abilities of PCs to know what’s going on with other PCs even when they’re not present (because the players are all sitting in the same room and overhearing it all). As these are all somewhat tongue-in-cheek items, they are separate from the main list of artifacts in the book. No attempt is made to connect them to Golarion and give them histories in the world, which is a good thing. These are items that don’t really have an effect on the game world. They simply exist to help the players’ feelings of verisimilitude a little.

The next two sections cover “Legendary Artifacts” and “Lesser Artifacts” respectively. The first of these is, by far, the largest section in the book, containing descriptions of nearly 30 artifacts (and that’s counting group entries, such as the Seven Swords of Sin, as one item). Found amongst these are many that have been part of the game since its earliest days (such as the Orbs of Dragonkind and the Axe of the Dwarvish Lords), updated to Pathfinder rules and given histories that place them within the Golarion campaign setting. There are also many artifacts that have been mentioned in previous Golarion sourcebooks, and a bunch more that are brand new for this book. Every artifact description contains not just its mechanical statistics, but also a section on its history as well as a section on “Ramifications”, which discusses the possible effects the artifact can have on the game world and on game play as a whole. This is a brilliant addition, as sometimes GMs can add artifacts to the game without thinking carefully about what might result. The “Ramifications” section gives GMs an idea right out of the gate and allows them to carefully consider whether adding any particular item to their games is a good idea.

The artifact histories are rich with detail and help to add flavourful lore to the world. Even if none of these artifacts ever show up in a game, the GM can still use their histories to spin out stories of them, helping to make the world feel more alive and changing. All the artifacts also have lavish illustrations, which help immerse players in the world.

The descriptions in the “Lesser Artifacts” section are (not surprisingly) shorter and less fleshed-out. They lack the “Ramification” section, but as these items are not as powerful, the section isn’t as necessary. They also lack a “History” section and are mostly written up as generic magic items (although the general descriptions of some of them contain snippets of history). This is unfortunate as it takes away from the flavour of the items a great deal. I realize this is due to space issues. If the lesser artifacts were as detailed as the legendary ones, there wouldn’t be room for as many of them. However, I personally would have preferred to have a couple more legendary artifacts with full write-ups and no lesser artifacts at all, rather than the way it is. This is a very minor complaint, however. There are loads of legendary artifacts to keep me satisfied for a long time.

Artifacts & Legends is not the kind of book all GMs will have a use for. After all, some GMs prefer low-powered campaigns and do not wish to deal with the implications of having artifacts in the hands of player characters. However, those who do want to include artifacts in their games or simply wish to include stories of artifacts will find a lot of use for it. It will provide them with the tools to create epic storylines that their players will talk about for many years to come.
Posted by Michael Ray Johnson at 17:34