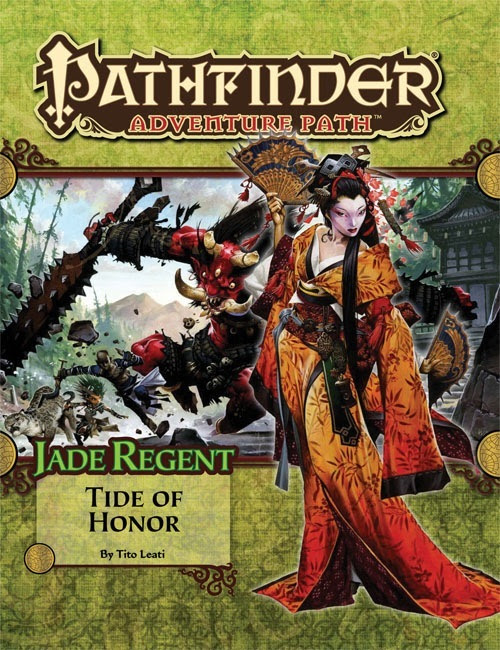 In Tide of Honor by Tito Leati, the fifth instalment of the Jade Regent Adventure Path, the PCs finally arrive in Minkai, the country of their destination. There they need to begin gathering allies to help them overthrow the Jade Regent and place the rightful heir, Ameiko, on the Jade Throne. Tide of Honor is something of a change in style for the adventure path. What has been primarily a journey from one point to another now starts to set up a home base. Instead of fighting clearly defined enemies blocking their way, the PCs must now engage in a significant amount of diplomacy to win the trust and assistance of people who might be willing to help them, or might not. There are still obvious enemies to fight, but there are also a number of people who could go either way or just remain neutral. There’s a great deal of roleplaying potential in the adventure, more so than any of the previous instalments (with the possible exception of Night of Frozen Shadows), and for groups who prefer that sort of thing, I think this adventure has the potential to be one of the most enjoyable and memorable of the entire adventure path. However, for groups who prefer a more combat-oriented approach, there’s still lots to keep them happy, and GMs can easily gloss over the diplomacy stuff in such cases.

For the first time in Jade Regent, PCs are able to start taking real control of their destinies. Up until now, they’ve been following a trail laid out for them, defeating enemies sent to stop them, and making the occasional blow against the main enemy, but for the most part, they haven’t had a lot of say in what they needed to do. They had missions to complete and a destination to reach, and that was it. There have been rewards along the way, but by the end of the fourth adventure, some groups might be starting to feel a little railroaded. This adventure is sure to change that as the ball starts to move very firmly into the PCs’ court. Naturally, there are still missions to complete and enemies to defeat, but this time, the PCs have a lot more choice in how they approach the missions and what order they complete them in.


The adventure opens with the PCs coming to the aid of a group of ronin willing to support Ameiko’s claim to the throne if they can first deal with some bandits plaguing the countryside. Once the bandits have been dealt with, the PCs now have their first real allies in the fight against the Jade Regent. After this, they have three principal missions to accomplish: convince the ninja clans to either support Ameiko or remain neutral, gain the aid of Minkai’s geisha, and defeat a local daimyo who is one of the Jade Regent’s most loyal supporters. These missions can be attempted in any order (although defeating Sikutsu Sennaka, the evil daimyo, is most easily accomplished if left till last), and in some cases, the PCs can even switch from one to another and back again if they so choose. The individual missions (especially the ninja one) are quite open-ended in how they can proceed, and this open-endedness is bound to give the PCs their first real sense of control, and now that they have control, they can start to feel that they’re winning.

Indeed, the entire adventure is quite open-ended in how it might resolve. Certainly, there are some outcomes more likely than others (and there’s a final attack by the Jade Regent’s forces to remind the PCs that he’s still out there), but there are also some (again with the ninja) that could vary quite heavily depending on individual groups. For example, some groups may not like the idea of dealing with ninja, a force often associated with evil, and as such, may not even want them as allies. Instead, they might push for the ninja to remain neutral. Some groups may refuse to deal with the ninja entirely, and risk the ninja joining with the Jade Regent. Indeed, any group could potentially make a mistake in negotiations, end up insulting someone, and see that person turning to the Jade Regent’s side.

A further example of the open-endedness of the adventure comes from the ninja assassin, Kaibuninsho, who has been hired by the Jade Regent to kill Ameiko and the PCs. There is no keyed encounter with Kaibuninsho in the adventure (although the PCs can potentially be warned of him by the ninja clans if they play their cards right). Instead, the adventure provides his statistics and an outline of his plan (basically follow the PCs around in disguise and wait for a moment to strike), and then leaves it to the GM to determine when Kaibuninsho shows up. Exactly when the PCs end up encountering and fighting Kaibuninsho depends entirely on their actions. They might spot a suspicious figure following them, or they might miss him completely and get taken by surprise. I really like this approach to villains in an adventure. When a villain is keyed to a map location, there’s nothing that says the villain has to be encountered at that spot (indeed, descriptions of the villain’s tactics will often indicate how that villain moves around), but it’s very tempting and easy to just leave the villain there until the PCs arrive. By not keying the villain to a specific location, the adventure helps ensure that the GM take a more creative approach to that villain’s arrival, making the encounter more relevant, and thus more memorable, to the GM’s particular group.

Tide of Honor is also firmly placed within its setting. The culture and customs of Minkai are important and play a strong role in the adventure, allowing the players a more immersive feel. They can get the sense that their characters are really wandering around a fantasy version of Japan. To a certain extent, the culture emphasized in Tide of Honor is stereotyped. There are samurai, ninja, and geisha. Not a lot is really seen of the common people of Minkai. However, when people play this type of adventure, what they’re generally looking for are things like samurai, ninja, and geisha, so it’s best to just run with it and give them exactly those things, and that’s exactly what this adventure does.

There are two main support articles in this volume. One is a gazetteer on Minkai and the other is a write-up on the god Irori. The Minkai article gives an overview of the government and major locations in Minkai, along with a few prominent adventure sites. It doesn’t discuss much about culture and customs, but most of that type of information can be gleaned from the main adventure. It does mean that people who want to use the article without the adventure (in order to spin their own adventures in Minkai) still need to read the adventure, but it does avoid needless repetition. In the article on Irori, Sean K. Reynolds gives his usual in-depth look at the god, covering the basic beliefs espoused by Irori, the role of priests, information on aphorisms and holy texts, and so on. Reynolds’s god articles (usually numbering two per adventure path) are always top-notch and provide valuable information for any Golarion campaign, not just the adventure paths in which they appear. This volume’s Bestiary contains the herald of Irori, “The Old Man”, as well as a number of creatures native to Minkai.

In summary, Tide of Honor is an excellent continuation of the Jade Regent Adventure Path. It has many great opportunities for roleplay, as well as loads to keep the combat-enthusiast players happy. Its open-ended nature gives players a well-earned sense of control over their characters’ destinies, allowing them to start guiding the outcome of the adventure path in the way that they want. Most importantly, it sets things up for the grand finale in the next instalment, The Empty Throne.
Posted by Michael Ray Johnson at 12:41