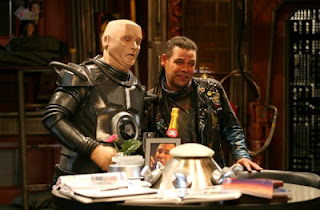 The tenth series of Red Dwarf got off to a great start with “Trojan”, heralding a triumphant return of the show. Unfortunately, the second episode, “Fathers and Suns”, does not live up to the heights of the first. That’s not to say it’s a bad episode. It deals with some clever and funny concepts, and I enjoyed it quite a bit. However, while I laughed, it didn’t have me in stitches the way “Trojan” did. Nonetheless, I still think Red Dwarf X is off to a very good start indeed, and I remain eager to see the remaining episodes.


Much like “Trojan”, there is a definite Series III to V feel in “Fathers and Suns”, but unlike “Trojan”, this is somewhat to its detriment. The episode focuses very squarely on Lister, a character who has experienced a certain growth over the show’s ten series. While he’s still identifiably the same person introduced in the very first Red Dwarf episode, “The End”, he’s gained a hint of maturity over the years, while still being a slacker who never really works for anything in his life. I felt “Trojan” did a very good job of presenting this older Lister while maintaining the spirit of the show’s earlier years. In “Fathers and Suns”, the plot centres around the paradox of Lister being his own father. Lister attempts to take on the persona of himself as a father to force his slacking son persona into making a better life for himself. Much of the episode requires a very immature Lister, one who behaves very much like the Lister from the show’s early years, thus adding to the feel that the episode could be from those years. However, the slacker son concept just doesn’t work so well when that slacker son is very obviously a middle-aged slacker son. It could have worked if the episode acknowledged that Lister Jr isn’t very young at all. Indeed, the episode could have played around with the idea somewhat and been far funnier for it, but instead, the episode seems to present Lister as if he’s still just as young as he once was. As Craig Charles so obviously isn’t, the episode loses something for it.

That aside, there’s a lot that I really like in “Fathers and Suns”. The fact that Lister is actually somewhat more mature when he’s drunk is quite funny, and I kind of wish the episode played it up a little more. On top of that, the new computer, Pree, having “predictive technology” is definitely the highlight of the episode, allowing the whole recording Lister makes to himself to happen. People are bound see some similarities with the Series II episode, “Queeg”, in which Holly is replaced by a new computer that tries to run the ship with military-like efficiency, the twist being that Queeg turns out to just be Holly having the crew on. However, while both episodes do involve a new computer taking over the ship, the similarities are actually fairly superficial, allowing for two very different stories to take place. The fact that Pree is programmed to be so in-tune with the highest-ranking crewmember (Rimmer) that she deliberately makes the same mistakes he would make so that he doesn’t have to do them himself is really quite ingenious.

There are some genuinely funny moments in “Fathers and Suns”. Although I wasn’t fully convinced by the immature Lister (solely because it never acknowledges his actual age and not because of any problems with Craig Charles’s performance), the scene where he watches the tape he made for himself is really quite funny. The scene where Rimmer and Kryten see the “repairs” on B-Deck and learn just how in-tune Pree is with Rimmer plays out really well. Also, I liked the “difference” between the “Medi-Bot” and the “Denti-Bot” where the latter turns out to just be the former masking his voice while wearing a surgical mask. Unfortunately, there are also a number of jokes that just don’t work. The “Chinese Whispers” joke was rather predictable and dragged on (although the final version of the sentence being the catalyst for Lister figuring out how to save the day was fairly clever). It also pushed the line of being a bit racist with Taiwan Tony's horrid accent. Finally, the scene where Rimmer and Kryten are deciding on the appearance of the new computer program (where Rimmer demonstrates just how much of a sexist pig he is) felt old and tired.

The performances are all top-notch. Craig Charles does a very good job of arguing with himself as both father and sun, and he’s also very good at playing drunk. Robert Llewellyn as Kryten is, of course, always a joy to watch and Chris Barrie is on form with Rimmer. Cat is woefully underused in this episode. The few scenes he does appear in seem to have him in just because Doug Naylor knew he had to have Cat in the episode somewhere. The only time Danny John-Jules really gets to show his stuff as Cat is in the anaesthetic scene, and that, unfortunately, is rather short and not all that funny.

Overall, “Fathers and Suns” is not a bad episode (I can certainly think of worse Red Dwarf episodes). I suspect I’m being a little harsher on it than I might otherwise be simply because I liked “Trojan” so much, and in comparison, “Fathers and Suns” doesn’t stand up. If “Fathers and Suns” had been the first episode, I would have probably been much more positive about it. There are some very funny moments and clever ideas in the episode. Honestly, if “Fathers and Suns” turns out to be the worst episode of this year, then Red Dwarf X will end up being an excellent series.
Posted by Michael Ray Johnson at 14:51