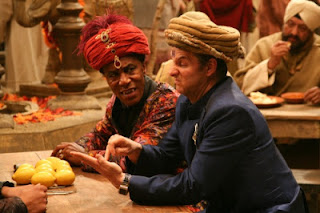 While the previous two Red Dwarf X episodes each focused primarily on one of the crew (“Trojan” on Rimmer and “Fathers and Suns” on Lister), this week’s episode, “Lemons” is more of an ensemble piece, with each of the main cast getting more-or-less equal screen time (although Cat probably gets the least). The character focus of this story is instead on the episode’s guest star, making for a bit of a change of pace from the previous two stories, made especially so by the fact that this is the first episode of Series X to have some fairly serious social commentary going on in it as well. The episode is a bit slow to start, with a few forced jokes, but once it gets into full swing, it’s very entertaining and quite funny—not as fall-out-of-your-chair funny as I found “Trojan”, but still funny enough to leave me quite pleased by the episode as a whole.


Probably the thing people will notice most about this episode is the religious aspect. For people who don’t memorize episode titles (i.e. the everyday non-fan viewers), it will likely be remembered as “the one with Jesus in it”. Of course, in true Red Dwarf fashion (and the fashion of lots of other sci fi), he turns out not to be the Jesus the crew (and, by extension, the viewers) think he is, but that just paves the way for the wonderful ending moment with the other Jesus and his twin, Judas. This is not the first time Red Dwarf has tackled the concept of religion and its effect on believers. Way back in Series I, “Waiting for God” took a look at the irresponsible things people do in the name of religion by showing us the background of the cat race and how they wiped themselves out in a war over what colour hats to wear. Other episodes have taken smaller jabs at religion in the form of short, one-off jokes, such as the news report on the finding of a missing page of the Bible, which reads, “The following is a work of fiction. Any similarity to...” “Lemons” has pretty much the same things to say about religion as “Waiting for God” does: The person you believe is God might not actually be God (Jesus of Caesaria in this episode and Lister/Cloister in “Waiting for God”), and people will do some pretty ridiculous things in the name of religion (such as going to war). It’s important to note that neither episode actually makes a claim that any particular religion or all religions are false, something that could be easily misread in them (the hilarious scene where Jesus questions the Ten Commandments and whether God himself breaks those commandments on a regular basis is, admittedly, quite scathing in its criticisms). Rather, they both criticize the lack of critical thought people apply to their beliefs and how they express those beliefs. I’d have to say that “Lemons” is not as effective in its criticisms as “Waiting for God”, partly because it doesn’t really say anything new, and partly because I don’t think it actually intends to be as deep as the earlier episode. To a great extent, “Lemons” is also meant to be just a fun romp where it’s easy to ignore the socio-religious commentary if you want. So for wider appeal, “Lemons” is probably more successful than “Waiting for God”, which is more difficult to appreciate without thinking about its larger message.

Of course, there’s a lot more than just commenting on religion going on in “Lemons”. Although it doesn’t focus on any one member of the main cast, there are moments of insight into some of those characters. In particular, the episode builds on the events of “Fathers and Suns”, showing that Lister has actually started the robotics course mentioned at the end of that episode. In retrospect, “Lemons” has made me appreciate “Fathers and Suns” more, as this episode shows us a glimpse of a Lister who is actually starting to grow up. A criticism I had of “Fathers and Suns”(see my review) was that it didn’t really acknowledge Lister’s physical age when dealing with his immaturity. While “Lemons” doesn’t directly acknowledge his physical age either, it does show us a Lister who has finally realized he should have grown up a long time ago and is starting to do something about it. I love the little bit near the end when he realizes he’s not so bad and can still make something of his life when he tells Jesus how he used to idolize historical figures. Now that he’s met Jesus, whom he calls a “bit of a nob”, he knows that he doesn’t have to live up to them. He’s realizing that being a better person is not insurmountable. I’m starting to really like the direction Lister is going in this series, and I look forward to seeing how it develops in the remaining episodes. I have a feeling this is going to be a major focus of the series as a whole.

While there isn’t really much insight into Rimmer as a person in this episode (apart from some classic Rimmer, where despite not believing in Jesus, he still wants Jesus’s autograph), there is some insight into his background. We learn why his middle name is Judas: his parents were members of the Church of Judas, an organization that believes Judas was Jesus’s twin brother and he was the one who was actually crucified so that Jesus could come back three days later and appear to have risen from the dead (another commentary on how anyone can be made into a god). I do have to wonder what happened to Rimmer’s parents being Advent Hoppists, though, but this is hardly the first time Red Dwarf has rewritten a character’s history (just look at the history of Lister and Kochanski’s relationship). Not to mention that the Church of Judas is somewhat more believable than the Hoppists, anyway.

The early parts of the episode leading up to the crew’s first encounter with Jesus are the weakest parts of the episode. While some of the events have a good pay-off later (such as Rimmer scoffing the Shakespeare expressions), most of the jokes feel forced. It was like Doug Naylor realized he had to include something funny before he got to the good stuff, so what could he include...oh yes, a...a skullet! A bald mullet. Christopher Barrie’s delivery just doesn’t seem into it at that point either, and it just falls flat. It’s similarly true with Cat stealing the “pork” from Lister as well. However, once the group has encountered Jesus, the story starts to take off, and the jokes feel far more natural, both in the writing and the delivery. There are some very funny moments. The fact that the future technology that Jesus loves the most is just a simple carrying bag is genius, and I love that he becomes a bag seller at the end. My personal favourite lines in the whole episode, however, come from Erin during the Ten Commandments discussion. When Jesus questions whether God wiping out his descendants is breaking the sixth commandment not to kill, she says, “It’s not killing. It’s genocide. I think that’s okay.” Then later, she says, “Don’t try to trip God up. He wrote those commandments in a rush. Didn’t have time to get them proofread.” Scathing religious criticism, but absolutely hilarious.

There is one subtle moment in the episode that I only noticed on second viewing. Shortly after the crew encounter Jesus, he invites them to eat with him, leading into a mock “Last Supper” set-up to the table. At the far left end of the table is a man who is never identified and never speaks. The only other people at the table are the Red Dwarf crew and Jesus. This extra man is wearing a white, hooded robe and has long hair and a thin, wispy beard. He looks remarkably like the other Jesus who shows up with his twin brother Judas at the end. I’m not sure if this is just a case of two similar-looking actors (but if so, why is there an extra person at the table anyway?), if the same actor played both parts but is not meant to be the same character (under the expectation that nobody would notice), or if he is actually meant to be the other Jesus who just happens to be there at that time (and invited to Jesus of Caeseria’s table along with the Red Dwarf crew, in which case, why isn’t more attention drawn to him?). It’s probably just a case of similar actors, but the similarity was enough to make me do a double-take and go back over that scene and the closing scene multiple times, pausing the picture repeatedly to try to compare, and still not being sure in the end. It’s not particularly important, but it intrigued me.

Overall, I enjoyed “Lemons” a great deal once it got past a bit of a slow start. It’s not quite as insightful as “Waiting for God” and not quite as funny as some of the best Red Dwarf episodes (like “Back to Reality” or “Gunmen of the Apocalypse”), but it’s thoroughly entertaining and a good way to spend a half hour.
Posted by Michael Ray Johnson at 17:20