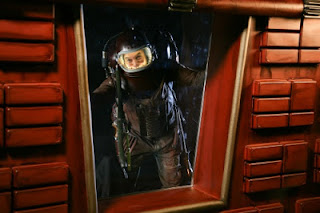 With the latest episode, Red Dwarf X is now two-thirds over, and it continues along quite strongly. “Entangled” is an episode that focuses quite squarely on the crew, particularly on the relationship between Lister and Rimmer, but it’s really Kryten and, especially, Cat who steal the show. While some jokes are little too drawn out (particularly Rimmer ones), it’s a very funny episode with some absolutely hilarious moments involving Cat and Kryten being “quantum entangled”.


While the title refers to Kryten and Cat becoming quantum entangled, “Entangled” isn’t really about either of these characters. Instead the pairing of Kryten and Cat (a pairing not very common on the show) helps to underscore the pairing of Lister and Rimmer. The episode is very much about the relationship between Lister and Rimmer and how they coexist so far out in space. To a great extent, all of Red Dwarf has been about this relationship. In many ways, Lister and Rimmer are “entangled” just like Kryten and Cat. Sure, their entanglement doesn’t create funny coincidences (although it certainly creates other kinds of funny situations), but they are both very much dependent on each other in a very literal sense. Holly originally brought Rimmer back as a hologram to provide Lister with company and to stop him going mad (probably the first proof that Holly was not as smart as he claimed), and Rimmer can only keep existing as long as Lister stays alive. If Lister dies, the ship will shut down Rimmer’s light bee.

While there has been some interaction between Rimmer and Lister in Red Dwarf X so far, “Entangled” is the first time this series has really focused on that interaction, scenes where one, the other, or both are trying to outdo or get the better of the other. These kinds of scenes used to be very common on Red Dwarf, so it’s nice and somewhat nostalgic to see them back again. Craig Charles and Chris Barrie play the scenes wonderfully too. The scenes on the flight deck (even if it does look a lot different now than it used to) reminded me in many ways of the numerous flight deck scenes in Series I and II.

However, while the episode may be about Lister and Rimmer’s relationship, the comedy awards definitely go to Cat and Kryten. Their interplay off each other throughout all the “coincidence” scenes is utterly hilarious, and Danny John-Jules and Robert Llewellyn nail the simultaneously speaking perfectly. These are some of the funniest scenes this series (particularly the initial one when Cat is hunting the space weevil). Admittedly, the coincidences that come as a result of the entanglement are rather reminiscent of the luck virus from the Series V episode, “Quarantine”, and some people might find this episode a bit unoriginal as a result. However, this really didn’t bother me. While similar, I found the two different enough to still thoroughly enjoy “Entangled”.

If I had one complaint about Cat and Kryten’s entanglement, it would be that the episode doesn’t take the opportunity to explore the relationship between these two characters. As I said, Cat and Kryten are not a common pairing, so this would have been the perfect opportunity to learn more about both of them. Alas, I feel this is a common fate of Cat. He is potentially the funniest character on the show, but apart from funny moments, the show rarely develops him much as a character. There have been far fewer Cat-centric episodes than any of the other characters. Of course, the show is about Lister and Rimmer, with Cat and Kryten being support characters, so it’s natural that Cat would not have the focus as often as Lister. However, I do sometimes wish the show would do just a little more with Cat.

While there’s a lot of funny stuff happening with each of the pairings, there are a few forced or overdone jokes, generally ones that involve Rimmer. There’s been a trend since Series VIII to extend many of Rimmer’s jokes just a little too long. I haven’t commented about it in my previous reviews of Series X because, while it’s been present, it hasn’t really impacted my enjoyment of the episodes. However, there are a couple of moments this episode where this trend did stand out to me. The first is when Rimmer is trying to excuse himself of any responsibility for the deaths of the Red Dwarf crew. He asks whether it’s the man’s fault or the system that produced the man. Lister says it’s the man, to which Rimmer replies, “Or was it the system?” Lister repeats his response, and Rimmer asks the same question again. The joke is made and is quite funny, but then it keeps going. Rimmer asks the question, “Or was it the system?” one too many times, and it really hampers the overall effect. (I do realize there’s a pay-off for this joke at the end, but I still feel it’s repeated one too many times here.) It’s hard to say why this sticks out more in this episode than similarly overdone jokes in the last couple episodes, but I suppose it’s because the irritation with it has been building up slowly episode to episode. Perhaps also because there seem to be more of them in this episode. The other really notable one is when Irene is changed back to human from chimp form. The “she’s naked” bit extends just a little too long while Rimmer gives Kryten yet more directives to slow down him getting her something to wear. It and the “system or the man” joke start out funny, but end up failing because of the wearying repetition.

However, these repetitive jokes are considerably outnumbered by the funny material in the episode. The BEGGs (biologically engineered garbage gobblers) are a great nod to other creatures like the GELFs from previous series, adding to the weird conglomeration of strange creatures humanity created before going extinct. It is a bit odd that Lister would be surprised they spoke English, as he managed to play a poker game with them the day before, a game in which he bet and lost Starbug and Rimmer. The idea that Lister and the BEGGs mimed everything is actually quite funny, and lets me believe the poker game part. But the BEGGs also managed to give Lister some pretty specific details about when they expected delivery of Rimmer and how the bomb on his groin would explode if tampered with. I suppose Lister could see the countdown display on the bomb, so put two and two together. Still, it makes for a lot of detail that has to be filled in. This is a minor point, however.

The Erroneous Reasoning Research Academy (E.R.R.A. for short) is a brilliantly funny concept. It fits perfectly in the messed up universe of Red Dwarf that someone would have the brilliantly stupid idea of creating an organization that exists specifically to do everything wrong in the hopes that two wrong theories would combine together to create a correct new one. There’s a lot of cleverness going on in the writing and presentation of E.R.R.A. Not only does its abbreviation sound similar to the word error, but the concept also plays wonderfully on the general fact that two wrongs don’t make a right (as evidenced by the fact that E.R.R.A. failed to accomplish what its creators hoped it would), something that, despite professing to believe it, many people continually try to make untrue by covering up one wrong with another. I particularly like the word errorpert. I also love that Rimmer feels at home on the E.R.R.A space station.

Professor Irene Edgington, also know as Professor E or Irene E, is a fun character, even if she doesn’t do a whole lot. Although much of what she does do is actually fairly predictable (i.e. she always does the wrong thing), Sydney Stevenson sold it well. The subtle clincher, however, was her glasses, which she wears upside down. It’s a tiny touch that no one ever draws attention to, but I found it hilarious. The ironic touch of her name (Irene E sounds like irony) was fun, too, although as my wife pointed out when we watched the episode together, the irony isn’t really that she gets one thing right; it’s that she trips over the box of accident reports Rimmer left outside the airlock and accidentally kills herself, proving that the real failure is Rimmer himself. His latest crazy plan to make things safer actually just made things worse. “Was it the man or the system?” Definitely the man. It’s doubly ironic that Rimmer was just about to get somewhere with a woman, so he messed that up too. An interesting thing about Professor E’s death is the fact that neither Rimmer nor Lister seem to care that much. After all, she was another living human being in a universe where they believed Lister and Kochanski were the only ones left. While it’s not at all surprising from Rimmer, it does seem a bit heartless from Lister. However, Lister has been through a lot, and has seen a lot of death. Perhaps the only way to deal with it is to ignore it.

Overall, “Entangled” is a fun episode. It has some great moments between Lister and Rimmer, and some even greater moments with Kryten and Cat. Apart from a couple of forced or overdone jokes, there’s a lot to laugh at. Only two episodes remain this series, and I look forward to what they will bring.
Posted by Michael Ray Johnson at 22:40