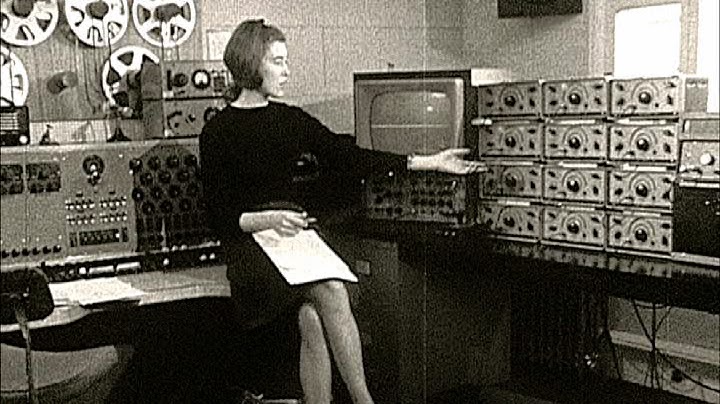 Delia Derbyshire is a name well-known to Doctor Who fans as the person who brought us the original version of the show’s famous theme music. She did a whole lot more for Doctor Who, and her legacy extends well beyond just that one show. However, in all her time on Doctor Who, she was never credited for it. Ron Grainer wrote the Doctor Who theme, but it was Derbyshire who arranged and realized it. Even though Grainer felt she should be credited for it, she wasn’t because she was an employee of the BBC Radiophonic Workshop, which had a long-time policy that its members did not get individual credit for work they did as employees of the Workshop. So even though many fans knew who she was, her name never appeared on screen. The arrangers of the later versions of the theme, from Peter Howell to Murray Gold, all received credit, but not her. It wasn’t until—gasp!—“The Day of the Doctor” last year (several years after her death) that Derbyshire finally received her first on-screen credit for the work she did on Doctor Who. But on-screen credit aside, Delia Derbyshire was one of the pioneers of electronic music, and she is finally starting to be acknowledged for the monumental role she played in music history.

The Delian Mode is a documentary about Derbyshire and her music. From director Kara Blake, it weaves together interviews with the people who worked with her and samples of her music and recordings of Derbyshire herself. But the documentary is more than just a dry presentation of facts and commentary. It’s visually and audially mesmerizing, a work of art in itself. Through it, viewers journey through the process Derbyshire used to create the haunting music she’s famous for. We see not only the actual equipment she used, but also visual interpretations of the ideas and concepts behind the music. We learn of the everyday items she sampled sounds from and hear her own words on how she felt as a woman in an industry dominated by men. One of the most phenomenal things I learned from The Delian Mode was that, after Derbyshire’s death, 267 tapes and countless manuscripts were found stored in her attic—a massive testament to the huge output of her work.

The Delian Mode was released in 2009 and won a Genie award for best short documentary in 2010. In my view, this is a beautiful film and a moving tribute to Derbyshire, one that will be enjoyed by not just Doctor Who fans, but by anyone with an interest in electronic music; I certainly feel it deserved this award. I highly recommend watching it!

Posted by Michael Ray Johnson at 11:47