Cosmos - A Sky Full of Ghosts 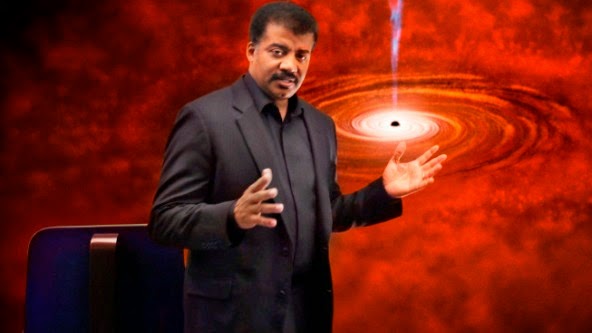 Imagination is a powerful thing. It’s the ability to contemplate things that might be and sometimes even to contemplate the complete impossible. The fourth episode of Cosmos, “A Sky Full of Ghosts” is really all about the power of imagination, as well as its pitfalls. It shows how science, at its most basic, all starts with an idea, one that people then investigate. Sometimes the idea is right. Sometimes it’s wrong. Other times, it’s somewhere in between and needs to be modified to bring it closer to being correct.

The episode opens with a very simple statement of “Seeing is not believing,” and proceeds with a demonstration of how some ideas can seem obvious and yet be wrong. Light can play tricks on our eyes. From the exact position of the sun in our sky to the existence of a horizon to the apparent existence of a cosmic horizon, we encounter optical illusions every day of our lives. But it’s through investigating these illusions and questioning them that we uncover the truth. “A Sky Full of Ghosts” goes on to talk about the nature of light and establishes that light has a finite (albeit immensely fast) speed. We can determine the age of the universe (in billions of years) by how far we can see. The light from the “cosmic horizon” has needed those billions of years just to reach us, but there simply hasn’t been enough time for anything beyond that point to get here. We also learn more of how gravity works and its effects on light itself. 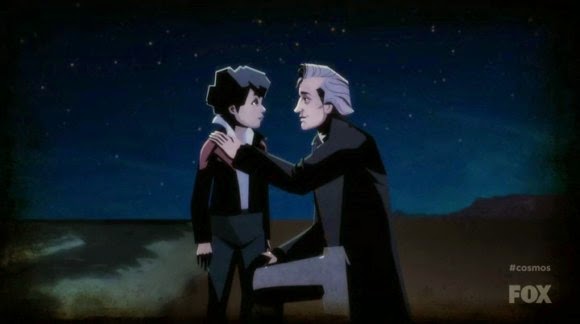 But more than the nature of light and the age of the universe, the episode looks at the people who have helped to bring us to our current understandings. Galileo and Newton are mentioned, of course, and we learn about Einstein and his Theory of Relativity. But we also learn about people who are less-well-known in the public eye: William Herschel (voiced by none other than Patrick Stewart) and his son John (who invented photography), and John Michel, “one of the greatest scientists you’ve probably never heard of” (I will admit, I was unfamiliar with him, myself). One of the things I love most about Cosmos is that it gives more than just the science. It tells us the stories of some of the people behind it, and it fills in the blanks with some of those less-well-known people. There have been a lot of scientists over the centuries, many of them almost completely forgotten, and Cosmos can’t possibly tell us about them all. However, it can give us some insight into a few of them. And by learning their stories, a whole new generation of potential scientists may be inspired to take up the call because they can see that, at its heart, science is driven by people—people with faults and who make mistakes, but who also sometimes make great discoveries fuelled by their passion to question and understand the world around them.

As the episode moves into a discussion of Michel’s concept of a “dark star”, what we now call a black hole, it moves into what may almost seem like pure fantasy—and much of it probably is, given that the episode suggests several possibilities. But despite the fact that the episode moves into speculation of things that we just don’t know for sure (which may seem a bit out of place in a show about scientific fact), it is the perfect illustration of one of the ways in which science advances, that whole concept of imagination that I mentioned previously—starting with an idea and investigating it. Neil deGrasse Tyson is very clear that we don’t know what happens inside a black hole, that what this episode then shows us is merely a thought experiment, but that is also the way that people like William Herschel with his ideas about light, Michel about dark stars, and Einstein about relativity all started out too. They performed thought experiments themselves and happened to come up with ideas that approached the truth as we know it. They and others after them then went on to provide the mathematical and experimental evidence to support these ideas. But without the ideas first, there would be no advancement.

And so modern scientists continue to do the same kinds of things. They postulate and hypothesize about things we don’t yet know or only know a little of. Sometimes the ideas are straight-forward; other times, they can get pretty wild seeming like the ideas about black holes in this episode (but quantum mechanics has shown us that “wild” is actually pretty tame when compared with reality). Many of the ideas will turn out wrong, but somewhere along the line, someone will come along with an idea that stands up to all the tests. 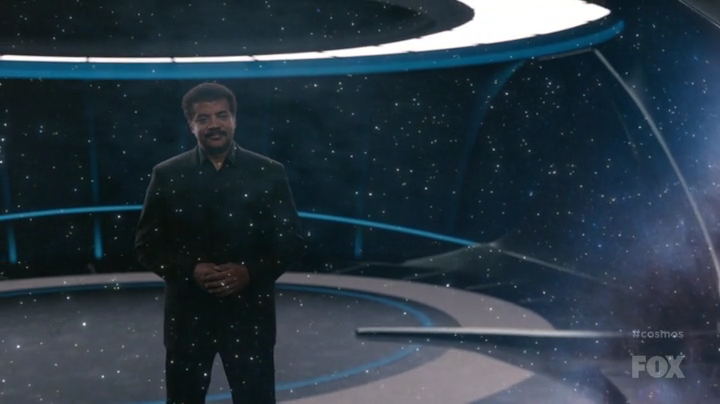 We don’t know yet what happens inside a black hole (as well as numerous other things about the universe), but maybe one day we will. We just have to keep questioning, the way people in the past questioned the tiny lights in the night sky, those ghosts of long-dead stars.
Posted by Michael Ray Johnson at 13:53