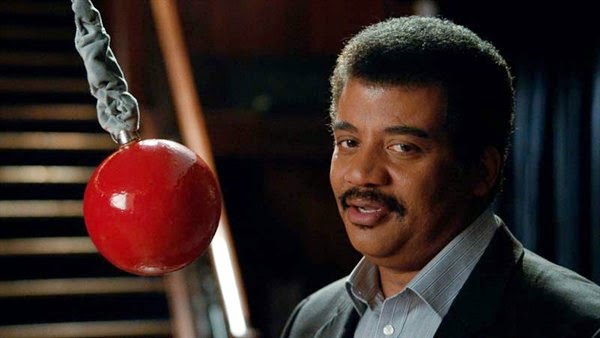 There are more atoms in a human eye than there are stars in the entire universe. So we learn in the opening moments of the sixth episode of Cosmos, “Deeper, Deeper, Deeper Still”. One of the most mesmerizing things about Cosmos is the way it draws together the commonalities between the cosmic and atomic scales—the awe-inspiringly huge and the equally awe-inspiringly tiny. It takes two things that people generally think of as separate and unconnected and shows how they’re both part of the same cosmos. Each affects the other, and we can never have a full understanding of one without having an understanding of the other. While this episode’s focus is on the atomic realm, it must still look to the stars in order to explain it all. 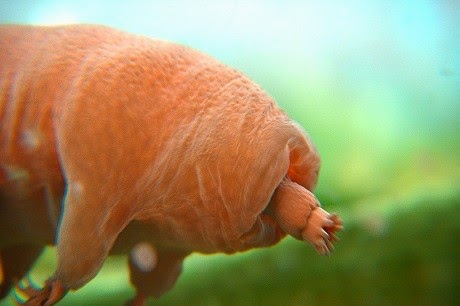 The episode takes us first on a journey into the microscopic realm of a dew drop, introducing us to the tiny lifeforms that live there, such as the tardigrade, one of the most resilient creatures in the world. We then enter plant cells to learn about the workings of photosynthesis to produce energy. There’s some rather entertaining computer animation imagining the inner workings of the cells as a factory production line, almost steampunk-like in its presentation. It’s a little odd, to be sure, but it helps to simplify a complex process that is still not fully understood. As Neil deGrasse Tyson narrates, we can recreate photosynthesis in a laboratory, but with nowhere near the efficiency and precision of an actual plant cell. If we could, we would solve all the world’s energy problems. And as unusual as the factory-like animation may seem, it’s important to remember that most of the animation in this series is simplified to make it easier for viewers to digest. The representation of atoms in this episode and others, for example, is not really what atoms look like, but they provide a useful, easily comprehended stand-in for actual atoms. One of the goals of Cosmos is to entrance new people into the scientific fold, to inspire future scientists—and inspiring the series has certainly managed to be! 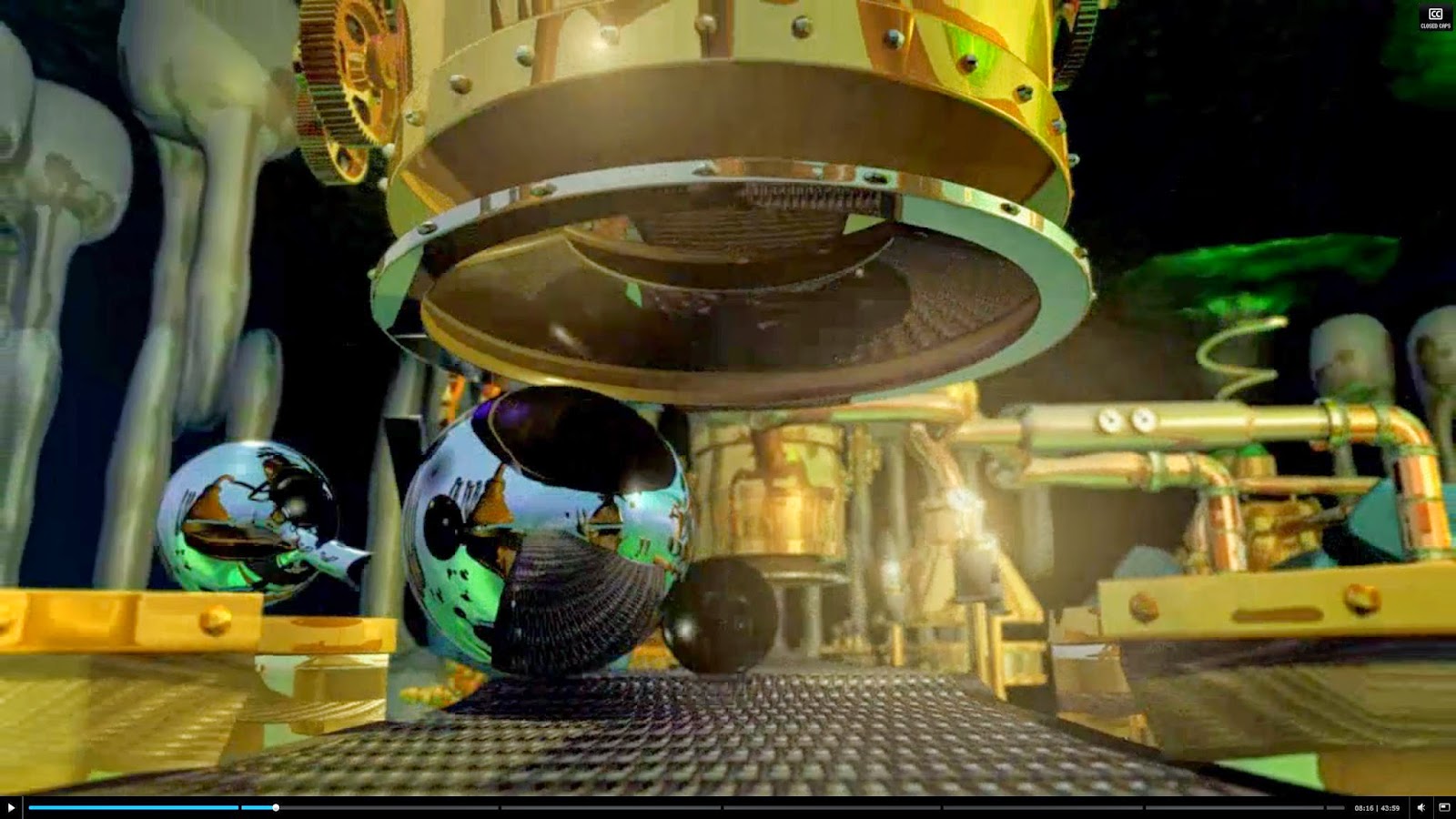 Following the steampunk plant cells, the episode proceeds to take us deeper still into the worlds of molecules and atoms. We learn of the carbon atom and its formation into complex molecules that allow life itself. We learn a little more of evolution, particularly the development of our ability to smell and just what scent actually is (collections of molecules with specific shapes that receptors in our noses register). And we go even deeper into the nucleus of the atom and its surrounding shell of electrons. 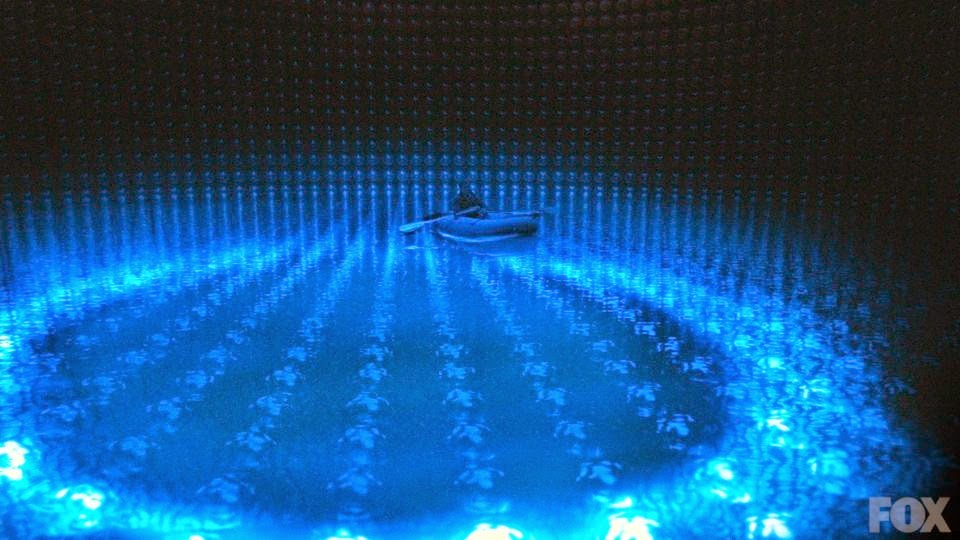 This episode doesn’t stop with just the structure of the atom, however. It also looks at one of the most populous yet elusive particles in the universe, the unbelievably tiny neutrino. I was mesmerized by the trip inside the Super-Kamioka Neutrino Detection Experiment in Japan. As Tyson says about neutrinos, “The lengths one must go to track them down is nothing short of astonishing.” I’ve known of what must be done to detect neutrinos, but have never actually seen it before. Combined with the knowledge of how neutrinos can pass through virtually anything, it becomes truly awesome.

Like other Cosmos episodes, “Deeper, Deeper, Deeper Still” doesn’t just tell us the science. It also provides the history behind it, from the Greek philosopher Democritus who first postulated the existence of atoms, to Darwin who postulated the existence of the long-tongued sphinx-moth, to Wolfgang Pauli who postulated the existence of the neutrino. The history helps enlighten us not just to who did what, but to how. Tyson explains the law of conservation of energy and how an apparent violation of that law led Pauli to conceive of the existence of a neutrino well before we actually found proof of it, much like Darwin predicted the sphinx-moth fifty years before it was discovered, and Democritus predicted the atom centuries before proof of its existence was found. Cosmos shows us how science can be used to extrapolate and predict with incredible accuracy things that we have not yet discovered.

And like most Cosmos episodes, this one also leaves us with several things that we don’t yet have the answers for. We learn how studying neutrinos might allow us to see past the “Wall of Forever” into the origins of the universe. That unbelievably tiny particle, smaller even than an electron, may hold secrets to the entirety of the universe. It takes us right back to the idea that the incredibly big and the incredibly small are all just a part of the same thing. We are all star stuff.
Posted by Michael Ray Johnson at 00:47