Cosmos - Sisters of the Sun 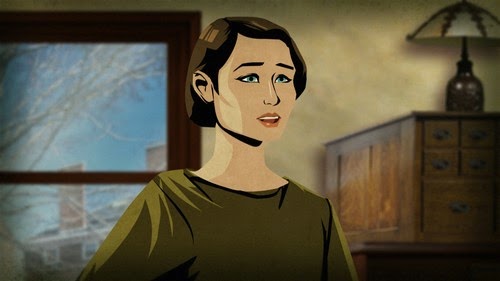 Science has been dominated by men for...well, a very long time, much like most of Western society. While that domination has gradually loosened over the last century, it still very much exists today, with women, on average, still having to overcome more obstacles than men in order to pursue a career in science. Because of this dominance, when looking at the history of science, as Cosmos has been doing in addition to explaining the science, it is inevitable that the majority of names will be those of men. However, they most certainly shouldn’t be all men’s names, for there have been many women working in science over the centuries (not even just this past one), and many women have made important discoveries. Yet, how many can we name off the tops of our heads? I’m embarrassed to admit that I can’t name many. Marie Curie comes to mind almost immediately, but after that, I have to stop and think in order to come up with a pitifully small sample. Yet asked to name men (or just scientists in general), numerous come immediately to mind before I have to stop and think a bit: Copernicus, Galileo, Newton, Einstein, Hawking, Sagan, Tyson... As I said, there are more men, but surely I ought to be able to remember a few more women. 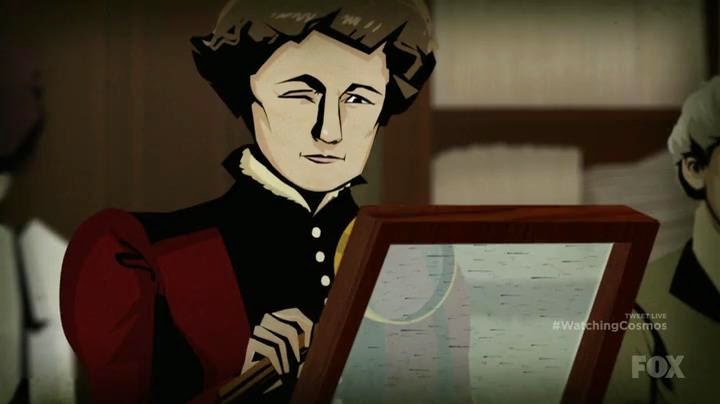 “Sisters of the Sun”, the eighth episode of Cosmos, takes steps to rectify that a little bit by introducing us to some of the pioneers of astronomical spectroscopy: Annie Jump Cannon, Henrietta Swan-Leavitt, and Cecilia Payne. Cannon developed the system used to classify stellar bodies and Swan-Leavitt the method to determine the distance to the stars and thus the size of the universe. Cecilia Payne took the work of Annie Jump Cannon and deciphered her spectral analyses to determine the composition of stars—particularly the ground-breaking discovery that hydrogen and helium are about a million times more abundant than any other element. 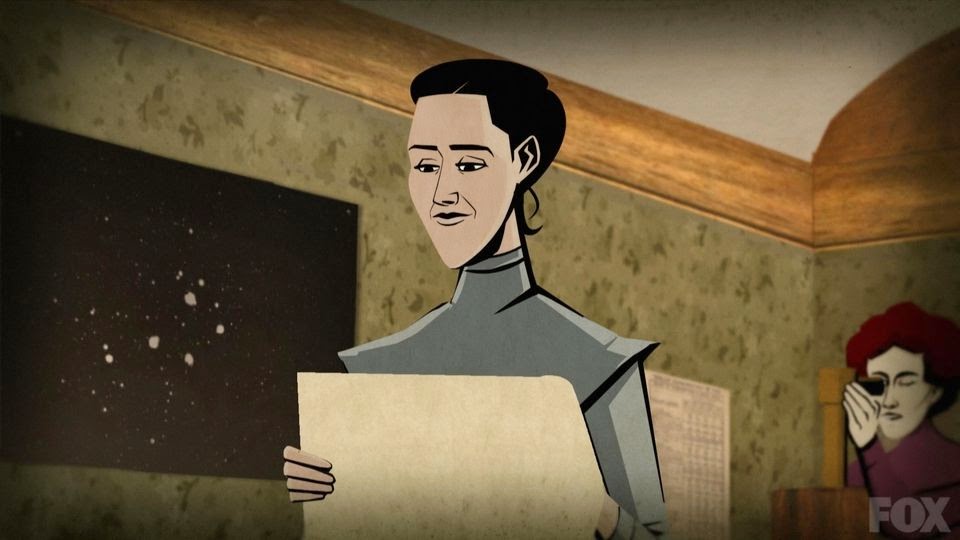 The episode opens with a look at how our earliest ancestors viewed the stars and at the pictures they saw within them. In particular, Tyson tells us of the stars we today call the Pleiades and the constellation Orion chasing them. This little tale of women terrorized by a man (in Greek legends) leads well into the story of Harvard astronomer Edward Charles Pickering’s “computers”—a team of women he assembled to catalogue the spectral analyses of stars, a team that was derogatorily referred to by others as “Pickering’s Harem”. The team was led by Annie Jump Cannon and Henrietta Swan-Leavitt. Many years later, Cecilia Payne arrived from England (where women were still forbidden to study astronomy) to study at Harvard. Her discovery of the abundance of hydrogen in the universe was contrary to established scientific belief at the time that the stars were composed of roughly the same elements as the Earth in the same proportions. When her Ph.D. thesis, Stellar Atmospheres, was reviewed, astronomer Henry Russell was not impressed with her conclusions and she eventually agreed to change them. Four years later, Russell discovered that Payne was right all along and publicly acknowledged that it was Payne’s discovery.

Yet despite her monumental discovery, Payne’s name is virtually unknown, as are Cannon’s and Swan-Leavitt’s. When Tyson first introduces Cannon and Swan-Leavitt, he says, “For some reason, you’ve probably never heard of either of them. I wonder why.” But there’s a knowing look in his eye and sarcasm in his voice. He’s alluding to the sexism that has drowned out their names. 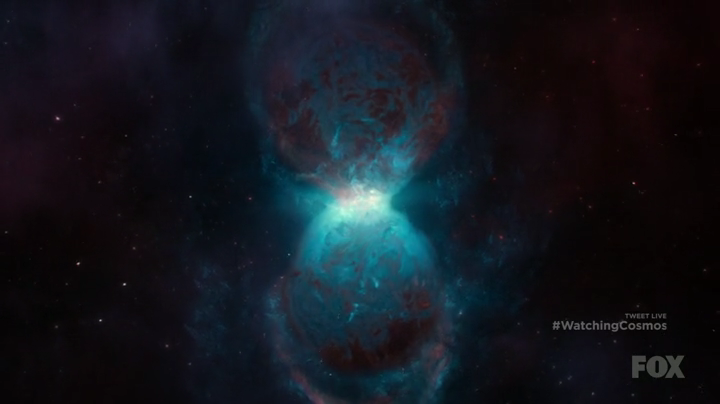 The second half of the episode discusses the different types of stars and their life cycles. We learn how our own own sun will eventually die, and learn of binary stars that will produce novae. Then there are the stars that will go supernova and the ones that will eventually become black holes. Most awe-inspiring (for me at any rate, partly because I had never heard of it before) is the hypernova, an explosion even more massive than a supernova. We learn of Eta Carinae (the second-brightest star in the sky, visible in the southern hemisphere), a star that could turn into a hypernova at any time. Its explosion will (or might already have since it’s 7500 light years away) wreak havoc on even surrounding star systems.

The episode ends by returning to the Pleiades. Tyson informs us that the stars that make up the constellation Orion will seem to get ever closer to the Pleiades over the next several million years, but then they will all die out. The younger stars of the Pleiades will spread out into the Milky Way. The young maidens of Greek myth will finally escape their aggressor.

This is the first episode of Cosmos to mention the contribution of women scientists, but I certainly hope it’s not the last. The series must condense a lot of history into just thirteen episodes, so there are a lot of scientists who will go unmentioned, but surely there’s room for a few more women. Otherwise, this episode runs the risk of becoming the token “women in science” episode. And since part of the purpose of this series of Cosmos is to inspire a new generation of scientists, it’s important that the young girls out there see role models for themselves as well as the boys.
Posted by Michael Ray Johnson at 11:43