Wizards Vs Aliens - The Cave of Menla Gto 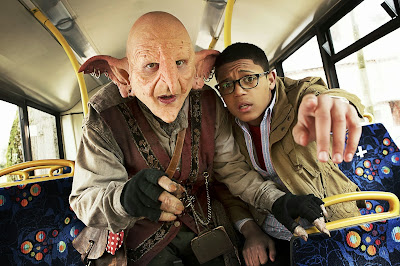 After a great, but frustrating story last time, Wizards Vs Aliens continues with a rather mediocre story. While there are moments that I like in “The Cave of Menla Gto”, the overall plot is weak and rather contrived. There are some nice character moments, particularly for Randal Moon, but also Benny—which makes for a nice change, as any development of Benny is welcome. However, much of what comes from those moments is undone by a nice big reset button at the end. There is also some nice advancement of the series’ metaplot, but that is only a small part of these two episodes, and it is not enough to save the entire story as a whole. 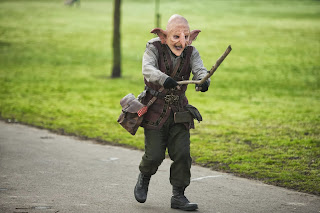 I must admit, I’m not really sure what the main point of this story is. For a while, it seems like a vehicle for developing Randal Moon as a full-fledged character, and it does advance his personal storyline in a way even the principal characters don’t normally get. He actually develops and grows as a character. Unfortunately, most of his growth is then erased by having him literally forget everything he’s learned. He does apparently remember the friendship he has developed with Benny, but I fear even that will be forgotten by the next episode, and he’ll be back to mocking Benny and science. In other words, he’ll be exactly the same as he has been in every episode to date, much like the other characters. There are a lot of very enjoyable moments as Moon discovers the outside world. In particular, I love his first reaction to seeing a bus. To snatch all that away at the end just cheapens what has happened throughout the story and makes it all kind of pointless and a waste of time.

Admittedly, I can see why the reset button is in there. Randal Moon is too powerful. When he creates two duplicates of himself and shows that he is capable of single-handedly wiping out the Nekross, I found myself wondering how in the world the show was going to explain his not doing that week after week for however long the show continues. The obvious solution is to make him forget everything that he has learnt. Alas, the better solution would be not to make Moon so powerful in the first place. I really like that he begins to learn how to mix magic and technology, showing that magic really is just a form of energy that science might one day explain. However, he masters it much too easily and becomes unstoppable. It would be much better to have him struggle with it longer, even make a few mistakes along the way. I also think it’s a mistake to allow him unlimited spellcasting. He’s not human, true, but magic needs to have limits. The three-spells-per-day rule is one way of imposing such a limit. Allowing one of the main characters to bypass that limit to such a degree means that there’s no good reason why the wizards can defeat the aliens. All they have to do is call in the hobgoblins. It’s one thing to say that, as a hobgoblin, Moon is more magical than a human, but the better way to achieve that is to make his spell limit a little larger but not infinite. Five spells per day (or something very close to that) would work just fine. 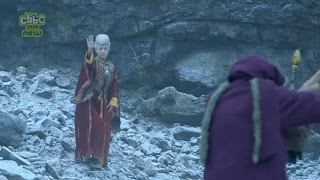 The main plot doesn’t really achieve much either. Tom accidentally dips into grim magic (which itself is a nice nod to continuity with “Rebel Magic”) and is infected with the “Devastation”, an illness which will kill him unless he gets healing from the fabled Cave of Menla Gto. It’s a bit of a contrived set-up, but forgiveable. The real problem comes from the fact that Menla Gto is supposedly a cave that no one has been able to find, one that may be nothing more than legend. Yet a simple spell from Randal Moon is enough to put Ursula, Tom, and Michael practically in front of its doorstep. Yes, they have to trudge through the mountains for a little while in the cold, but the task is surprisingly easy. They arrive in Tibet, Ursula’s staff detects the correct direction to go, and they reach the cave just as they’re getting a bit tired out. So why exactly has nobody else ever been able to do this if finding its location is so simple?

Yes, there’s only a limited amount of time in the two episodes to have them actually search for the cave. However, there are ways to make their journey seem more difficult without taking up much screen time—everything from them having to change their route due to an impassable crevasse or rock-slide to having to spend a night in the freezing cold. Showing a little bit of hardship would give Tom’s illness a little more gravitas. As it is, they reach the cave with little difficulty, spend a lot of filler time in episode two not really doing anything, and then Tseringma gives up her life for Tom.

The worst thing is that the whole plotline about Tom’s illness and Tseringma’s eventual sacrifice could be very powerful and emotional if Tom actually grew from the experience. Alas, there’s really no evidence that he’s changed in any way at the end. The whole story becomes very much filler as a result.

I do really like the Nekross side of the story though. We get to see the Nekross actually approaching things with a bit of intelligence. Rather than just coming up with the “nefarious plot of the week”, they work on addressing the things that have been holding them back. It’s nice to see them attempting to do something about the shroud, which they pretty much seemed to ignore for the entire first series. Of course, their work is undone at the end, too, with the shroud back in place, stronger than ever, but the fact that the Nekross are actually adapting helps to replenish their sense of threat, which they are frequently in danger of losing. I hope we get to see a bit more of Nekross ingenuity in future episodes. 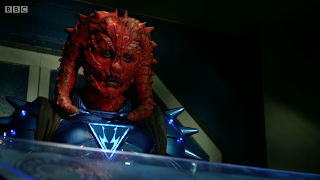 The further developments in Jathro’s plot continue to intrigue me as well. This storyline shows that the Nekross are not a single monolithic group. They have their own politics and internal struggles (beyond just Lexi and Varg trying to outdo each other). It adds complexity to the Nekross and makes them seem much more realistic.

Unfortunately, the Nekross storyline is not enough to save “The Cave of Menla Gto”. It’s not a terrible story, but it is rather mediocre, even occasionally somewhat dull (many of the scenes in the cave in episode two). The interplay between Benny and Moon, and Moon’s reactions to the outside world would redeem it a great deal if it didn’t invoke the dreaded reset button at the end. Here’s hoping that the next story is better!
Posted by Michael Ray Johnson at 20:12

Email ThisBlogThis!Share to TwitterShare to FacebookShare to Pinterest
Labels: Reviews, Wizards Vs Aliens