Doctor Who - An Adventure in Space and Time 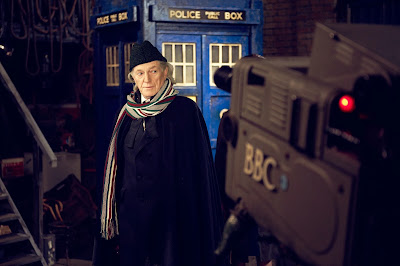 The story of the beginning of Doctor Who is a big one. A lot went on in those early years, both in front of, and behind the scenes. Telling that story is a monumental task. Telling that story in 90 minutes is virtually impossible. Yet in An Adventure in Space and Time, Mark Gatiss accomplishes that virtual impossibility with aplomb. Yes, in order to do so, he must leave some things out: there is no mention of original script editor David Whitaker, and the change of producers from Verity Lambert to John Wiles (who is never named) is skimmed over. Sometimes, multiple characters or events must be amalgamated for time or dramatic reasons. Nevertheless, An Adventure in Space and Time manages to convey an accurate, if simplified, version of events, and manages it beautifully with a heart-warming and emotional production.

When I first heard that there was going to be a docudrama about the origins of Doctor Who, I was only mildly interested. On the whole, I’m not a fan of docudramas. I like drama, and I like documentaries, but the combination of the two generally doesn’t interest me—principally because of the need, no matter how justified, to change and simplify things. When I want to learn about historical events, I’d rather learn the true details and not the dramatised ones. But that’s not to say that I think docudramas are inherently bad programmes. They’re just not generally to my taste. However, An Adventure in Space and Time drew me in completely. Perhaps it’s because I was already emotionally invested in its story, and as such it could easily sweep me up and take me along for the ride. Or perhaps it’s just because it is an exceptionally well-made production. It’s not perfect in every way and there are things I wish it did a little differently or a little better, but on the whole, I’m immensely satisfied with it.


Without doubt, the greatest strength of An Adventure in Time and Space comes from the performances. David Bradley delivers a picture-perfect portrayal of William Hartnell. He captures all Hartnell’s nuances, from his crotchetiness to his frustrations and inner turmoil. While his voice naturally sounds different to Hartnell’s, he gets the intonations perfectly right, making him not just look, but also sound the part. There are moments when he is playing the role of Hartnell playing the Doctor that it’s almost possible to forget that he isn’t the real first Doctor. He brings incredible emotion into the role as well, showing us a complex, multifaceted individual, and not just a grumpy old man—something that could have so easily happened in the wrong hands. 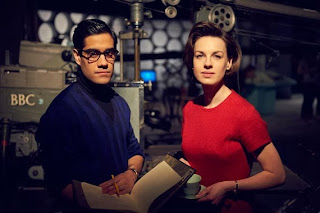 But while Bradley may be playing the central role of the story, he’s far from the only one to deserve acclaim for his performance. Jessica Raine is stunning as Verity Lambert, and similar acclaim should go to both Sacha Dhawan as Waris Hussein and Brian Cox as Sydney Newman, as well as just about everyone else (the only one who doesn’t really impress me is Reece Shearsmith as Patrick Troughton). Without the strength of these actors, I really don’t think the final product would be anywhere near as good. Since the story has to tell years of events in only a short time, it has to move quickly from one moment to the next. There’s not a lot of time to get to know the characters (in some cases, they barely seem to have shown up before they’re gone), so it’s the strength of the actors’ performances that allows us to get to know them despite the brevity of their screen time.

Indeed, if I have one criticism of An Adventure in Space and Time, it’s that sometimes events move forward a little too quickly. Things are sometimes set up, but have little, if any, resolution. As an example, the show does a very good job presenting us with the difficulties Verity Lambert faces as the first woman producer at the BBC, showing the stares she gets as she walks down the hall or some male colleagues outright ignoring her. In the case of the design of the TARDIS, we get to see her overcome these difficulties, yet in the case of Rex Tucker (the man “looking after Doctor Who...pending the appointment of the permanent producer”), the conflict with him is set up in one scene, and then in the next, we very briefly see him leaving and he’s gone. It’s incredibly sudden. Perhaps he did leave just as suddenly in real life, but I feel the script could have taken just a little more time to acknowledge the departure. It would help further demonstrate that Verity gets to keep control while Rex doesn’t (even if it is due to outside circumstances). Indeed, as it is, I suspect many viewers may completely miss who was driving away in that scene.

I also wish there was a little more background to Verity’s departure from Doctor Who. While the focus is obviously on William Hartnell’s reaction, the production has spent the time earlier building up Verity’s struggle to be accepted. Once she’s achieved that acceptance, her departure pretty much comes out of the blue and then she’s gone. We don’t really get to see her reap the rewards of her struggle. Time is obviously of the essence here, and perhaps more was written (and possibly even recorded) and then cut, but I would have liked to at least see a short scene in which we see her come to the decision to leave the show, one that would also examine her reasons for making the decision. Alternatively, even seeing a bit of what she goes on to afterwards would help. 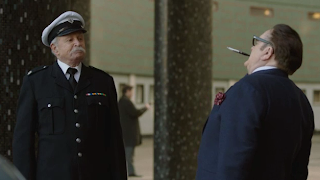 That aside, there are lots of little things throughout An Adventure in Space and Time that make it a joy for any Doctor Who fan to watch. The recreations of various moments from Doctor Who are spot on, particularly the scene of the Doctor’s first encounter with the Daleks. But there are also other moments not from the television programme itself, such as the photograph sessions each time there’s a cast change (that said, I do think the later companions start to look less and less like their real-life counterparts, particularly the actor playing Michael Craze/Ben). I absolutely love the cameo appearance from William Russell (who played the “real” Ian Chesterton in the 60’s). Here, he appears as the security guard, Harry, who tries to get Sydney Newman to produce his pass. It’s a beautiful acknowledgement of the original cast and the role they had in establishing the show. It’s hard to believe that Russell is now 89 years old! Carole Ann Ford (the original Susan) also has a very brief cameo as a mother calling her children in to watch Doctor Who. Finally, Jean Marsh (Sara Kingdom) and Anneke Wills (Polly) can be seen briefly at Verity Lambert’s farewell party. 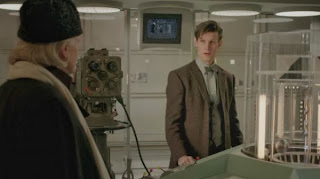 An Adventure in Space and Time definitely pours on the emotion and melodrama. Indeed, it’s very clearly meant to tug at the heartstrings and get the tears ducts running—something it had little difficulty doing with me. Occasionally, it pushes at being overly sentimental, but for the most part, it never crosses that line. The appearance of Matt Smith at the end, however, is perhaps one such moment when it goes a little too far. Whether it does or not is really a matter of opinion, but for me, on initial viewing, it worked. However, sitting back to think about it (and on second viewing), I can fully understand why some people have a problem with the moment. It does have the potential to ruin the viewer’s suspension of disbelief. It’s clear what the intention of the scene is. Obviously, the show isn’t saying that the real William Hartnell had a vision of Matt Smith from the future. Instead, it’s showing Hartnell’s faith that the show will go on even without him. We, as the viewers, are the ones seeing Matt Smith, not Hartnell himself. Smith is merely the embodiment of Hartnell’s faith—a faith we now know was true. Nevertheless, as a moment meant for the viewers rather than the character, it is a little fourth-wall breaking. And while it is just a short moment in the overall production, it’s position at the end means that there is no time to get back into the programme again if the moment doesn’t work for some people. Thus, it has the potential to spoil the experience. For this reason, it probably would have been wiser to cut Matt Smith’s appearance entirely.

As a whole, however, An Adventure in Space and Time really is quite beautiful. I tend to have mixed opinions about Mark Gatiss’s Doctor Who scripts, but here, he’s excelled himself with a production that is far better than anything I ever expected. Well done.
Posted by Michael Ray Johnson at 21:03

Email ThisBlogThis!Share to TwitterShare to FacebookShare to Pinterest
Labels: Doctor Who, Doctor Who 50th, Reviews