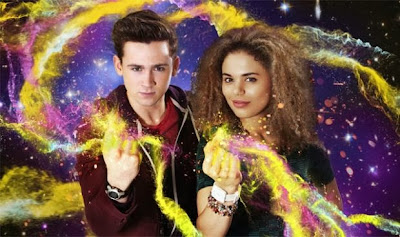 When Wizards Vs Aliens first premièred last year, I was eager to see it, coming as it did from the same people responsible for The Sarah Jane Adventures. There was good reason to believe it would be good. And it was, albeit not as good as I’d hoped it might be. Nevertheless, it was good enough to keep me eager for the second series. I saw a lot of potential in the series, even if many of its characters only occasionally rose above the stereotypes they were based on. So I was quite glad to learn that there would, indeed, be a second series. The first year of a show is often a time of figuring out what it can do and what its overall direction will be; the second year is often the year when the show demonstrates whether it will sink or swim.

Like last year (and like The Sarah Jane Adventures before it), this new series of Wizards Vs Aliens is made of two-episode stories. There are fourteen episodes this year instead of twelve, airing two per week over seven weeks. One of the forthcoming stories this year was originally written for the fifth series of Sarah Jane, but was one of the ones not filmed before Elisabeth Sladen’s untimely passing. The fact that it has been rewritten as a Wizards Vs Aliens story kind of shows the spiritual connectedness between the two shows and I’m eager to see how it works. The final story of this year is written by Russell T Davies (his first script for the show he co-created) and I’m also eager to see that one.

The second series première, “100 Wizards” by Phil Ford does not yet achieve the potential I’d like to see from the show. It’s very much a re-establishing of the premise after nearly a year off the air. But I certainly haven’t given up hope. I still see the potential and still hope that this season, Wizards Vs Aliens will significantly “up its game”. Indeed, “100 Wizards” is a great deal of fun overall, and fun is a great deal of what the show is about. It took me a little while to get into the story, but by the end of the second episode, I was fully engaged in what was going on. So in that respect, “100 Wizards” succeeds admirably. 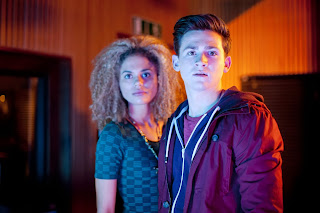 The story’s greatest success is in the character of Chloe. She is a character that, by the end, I was able to empathize with a great deal more than most of the other characters after having had an entire previous season to develop them. Indeed, if there’s one downside to the focus on Chloe, it’s that the other characters remain the clichés they were in the first series—especially Benny. Even after the long break, I’m still tired of his improbable abilities to make electro-magnetic pulse guns at home, while still apparently blowing things up in his experiments (a truly smart person would not be blowing things up on a regular basis; there’s a reason why scientists around the world aren’t constantly destroying things). He remains the epitome of the television nerd, and he really needs to develop a personality beyond that. Even characters who have had some decent development in the past, like Lexi, revert to their base stereotypes in this story.

The development of Chloe is very much geared towards creating the shock of the ending, and it works well. I did not expect that ending, although in retrospect, I probably should have. Considering that she, Tom, Ursula, and Benny were all aware that the Nekross knew the location of her orphanage, it was incredibly short-sighted of her to return to it. It was similarly so for Tom and the others not to think of what might happen either. In this respect, I’m glad that the show was willing to provide consequences, even though I didn’t expect the show to go quite so dark—especially after the uplifting tone of the rest of the story.

Of course, this isn’t the first time we’ve seen the Nekross successfully drain a wizard of magic, but it is the first time it’s happened to a character we’ve come to know and even like. In some ways, this is a good development for the show, as heartbreaking as it is (and the final scene of now-elderly Chloe watching Tom from a distance is truly heartbreaking). It helps to raise the Nekross beyond the cartoonish villains they often seem to be (even throughout the rest of this story). It creates a real threat—and a real threat adds tension. 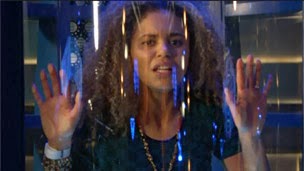 However, I do have my concerns about the ending. By draining Chloe, the show’s makers have effectively “fridged” her. Fridging refers to the killing off of a character for the purpose of advancing the hero’s storyline. Now, to be fair, this can be a powerful and dramatic technique used in moderation. However, it’s not really used in moderation and in the vast majority of cases, it is a female character who dies to provide motivation for a male hero—in this case, Tom (assuming, of course, that she is not simply forgotten about in the next episode, which would be an even worse fate). Wizards Vs Aliens has technically even done it before with the death of Tom’s mother (although admittedly, her death happened before the series began). Yes, Chloe is not technically dead, but with her magic completely gone and her aged to a point of feebleness, the story has essentially removed her, making her fate little different than death. She’s lost all her agency. All the development we saw of Chloe—everything that made us (and Tom) like her—turns out to be for Tom’s benefit rather than hers, to give him another reason to fight on and avenge her, and perhaps a reason to take his character through a period of self-doubt and mourning while he learns to get better and stronger as a result.

It’s a shame really, because up until those closing moments, I honestly thought she was going to be a new regular character. I really liked her. I even like the cheesy effects whenever she and Tom kiss (although that is primarily because they actually acknowledge the effect by having her ask if it will happen every time). Her relationship with Tom develops incredibly fast, but that’s not really unusual in television and movies. That said, the rate of development probably should have clued me off to the fact that she wouldn’t be sticking around. If she had been, they might have allowed more time for the relationship to develop naturally. Nevertheless, I think she would have been a great addition to the cast. Her training as a wizard would have given the show a new point of view and direction for the show to take in its second season.

In many ways, her story reminds me of Jackson Hawke’s from Series One’s “Rebel Magic”. Jackson was another character who was there for the benefit of Tom’s heroic journey and another character who, logically, really should have stuck around at the end of the story, but instead was hastily written out. Note, however, that the male Jackson gets to survive at full strength for a possible return appearance in the future, while the female Chloe loses all her abilities and becomes a feeble old woman. She doesn’t even get to go out heroically. Her end comes after the day has been saved, when she’s just rounded up and essentially executed. All she gets to do is utter one last line of defiance where she tells the Nekross that Tom will get them for this. It’s disappointing to see from the same people who brought us the wonderfully progressive Sarah Jane Adventures.

Chloe’s fate aside, the core story of “100 Wizards” is pretty straight-forward Wizards Vs Aliens fare. As I mentioned earlier, it serves to reintroduce old viewers and introduce new viewers to the concepts of the show. The opening sequence is very similar to the opening of “Dawn of the Nekross”, the first story of last season, except that this time, the wizards conducting their ritual are saved from the Nekross by the timely arrival of Tom and Benny. We are introduced to the home planet of the Nekross for the first time, but other than that, there is no real development of any of the regular characters or past plotlines. But nonetheless, there is a great deal of fun to the story.

I was particularly bemused by the general ineffectiveness of the 100 wizards, who mostly stand around and don’t do anything unless pushed to it by one of the regulars. While magic may not work directly on the Nekross or their technology, as is pointed out in the episode itself, magic can effect other things that can effect the Nekross. Wizards get three spells per day. Taking into account that some of the wizards may have used some or all of their spells prior to being captured, that still ought to leave a hundred or more spells at their disposal, yet we only see two of them cast a single spell each! Then again, in many ways, this just shows how human wizards are. In large crowds, many people become ineffective and simply follow the flow of everyone else. Why should wizards be any different?

Overall, I enjoyed “100 Wizards”, although I think it’s far from a perfect story. It does succeed in reintroducing the show after the break between series, and it manages to make viewers care for the new character it introduces and then essentially kills off, giving what seems at first to be a light-hearted episode a surprisingly dark ending. I remain hopeful for the remainder of the series and I look forward to the coming episodes.
Posted by Michael Ray Johnson at 23:21