Doctor Who - The Five(ish) Doctors Reboot 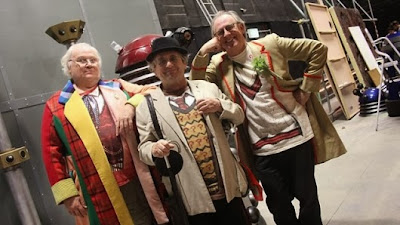 The last few weeks leading up to the 50th anniversary have been a busy period for Doctor Who. While there’s only been one actual new episode (“The Day of the Doctor”), there has been a plethora of other programming, such as the docudrama An Adventure in Space and Time, the prequels “Night of the Doctor” and “The Last Day”, and numerous other things for television, radio, and internet. Some have been serious drama (like the aforementioned docudrama); others have been documentaries (like The Science of Doctor Who) or behind-the-scenes programming. But perhaps the jewel amongst it all is Peter Davison’s “The Five(ish) Doctors Reboot”. If you haven’t seen it yet, take thirty minutes out of your day to watch it and then continue reading.

Despite the many years since they were on the programme, Peter Davison, Colin Baker, and Sylvester McCoy retain great passion for the show and that passion really shines in this beautiful tribute. The same is true for Paul McGann. Due to other filming commitments, his role here is very small, but the fact that he made time for even the small bit here (and his appearance in “Night of the Doctor”) shows the love he has for a show that he was part of for such an unfortunately short time.* All four of them would have truly loved to have been in “The Day of the Doctor”, but even though they weren’t, they still have a sense of humour about it. 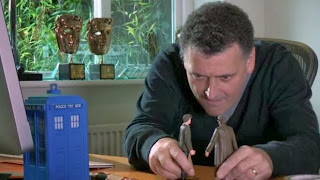 “The Five(ish) Doctors Reboot” has such charm to it. But more than that, it’s absolutely hilarious. And despite ribbing Doctor Who and many of the people involved (including making Steven Moffat the villain), I love that so many of the people it makes fun of were willing to be involved—including Steven Moffat, who arranged for them to have an actual budget and camera crew (Davison was originally going to record it on a personal hand-held camera). The cameo appearances by Peter Jackson and Sir Ian McKellan are a joy, as are the brief glimpses of old companions. Janet Fielding (Tegan)’s appearance commanding Davison to wake up from his dream is perhaps the best of those. John Barrowman is equally awesome. And Russell T Davies at the end! However, the top prize must of course go to the three central Doctors (Davison, Baker, and McCoy), who make just as much fun of themselves as they do everything else (I absolutely love McCoy’s constant mentioning of being in The Hobbit). 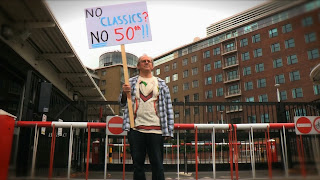 Peter Davison has made a few comedy shorts in the past few years, usually for convention appearances, and he’s definitely demonstrated a talent for it. He knows his Doctor Who lore and more importantly, he knows the behind-the-scenes details and people well enough to know exactly what to poke fun at. I suppose it helps that his daughter is married to David Tennant, so he’s had a lot of close association with the programme in recent years—and indeed, he even pokes fun at that!

Honestly, I enjoyed watching “The Day of the Doctor” (see my review of it) and found it a fitting anniversary special. However, I think I got greater joy out of watching “The Five(ish) Doctors Reboot”. It’s the one that really let me revel in being a fan. And it made me laugh. A lot. I hope Peter Davison keeps making comedy videos for a long time to come.

* That said, maybe McGann should stay away from Doctor Who for a little while now, or I might lose my wife to him. Her response to seeing him first in “Night of the Doctor” and then in this: “I’d tap that, no questions asked.” :-)
Posted by Michael Ray Johnson at 23:55

Email ThisBlogThis!Share to TwitterShare to FacebookShare to Pinterest
Labels: Doctor Who, Doctor Who 50th, Reviews