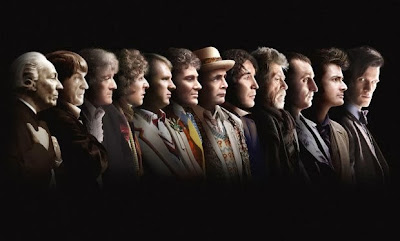 Not surprisingly, November was an even busier month for Doctor Who than October was. We didn’t have the excitement of newly discovered missing episodes, but we did get the 50th anniversary celebrations! Not surprisingly, the vast majority of things on this blog this month had to do with Doctor Who, but let’s start with the non-Doctor Who things first.

I only got round to one Pathfinder review this month: Player Companion: Blood of the Moon. There are a few more products waiting in the wings, including the third part of Wrath of the Righteous, Towns of the Inner Sea, and also Bestiary 4. Expect reviews of those over the next couple of weeks. Of course, there’ll be a whole new selection of products coming in December, too.

With all the focus on Doctor Who this month, I missed mentioning that Paizo has started an open playtest for the upcoming Advanced Class Guide, which will be released next August. This book will contain ten new classes. The Pathfinder game itself began its life with a massive open playtest, and Paizo has kept up the tradition with many of the subsequent rulebooks they have produced. This playtest runs until December 17th, and is a great opportunity for gamers to test what is to come and give feedback on it. There’s only a couple of weeks left, but that’s still enough time to try out a couple of the classes and run them through a few encounters.

The new season of Wizards Vs Aliens premièred at the end of October, and I began reviewing the episodes at the beginning of this month. Unfortunately, I’ve fallen a little behind and so far have only covered the first three stories—“100 Wizards”, “Vice Versa”, and “The Cave of Menla Gto”. I hope to catch up over the next week or so.

And that brings us back to Doctor Who. In the build-up to “The Day of the Doctor”, the beginning of the month saw the release of a couple trailers as well as a clip or two. But far more exciting was Paul McGann’s triumphant return to Doctor Who in “The Night of the Doctor”. This serves as a prequel to the anniversary special, but also details the end of the eighth Doctor’s life and the rise of John Hurt’s War Doctor. A second prequel, “The Last Day” was released shortly after. Then came the docudrama, An Adventure in Space and Time, about the beginnings of our favourite television programme. The month was rounded off with Peter Davison’s hilarious “The Five(ish) Doctors Reboot” and the special itself, “The Day of the Doctor”.

Also this month, I completed my series of reflections looking back on my own personal history with Doctor Who. I looked at the tenth and eleventh Doctors, as well as the spin-offs, movies, and other media.

Now, attention turns towards the Christmas special on December 25th. This will be Matt Smith’s final story and will feature his regeneration into Peter Capaldi’s Doctor—the twelfth...er....thirteenth Doctor. The numbering has gotten a little confusing now that John Hurt is in there. And it’s about to get more confusing (slightly spoilerish link here regarding the Doctor’s regenerations). Grumble, grumble, grumble...

To end the month, here’s the latest update regarding the TARDIS In Orbit project.

Have a great December folks!
Posted by Michael Ray Johnson at 22:35