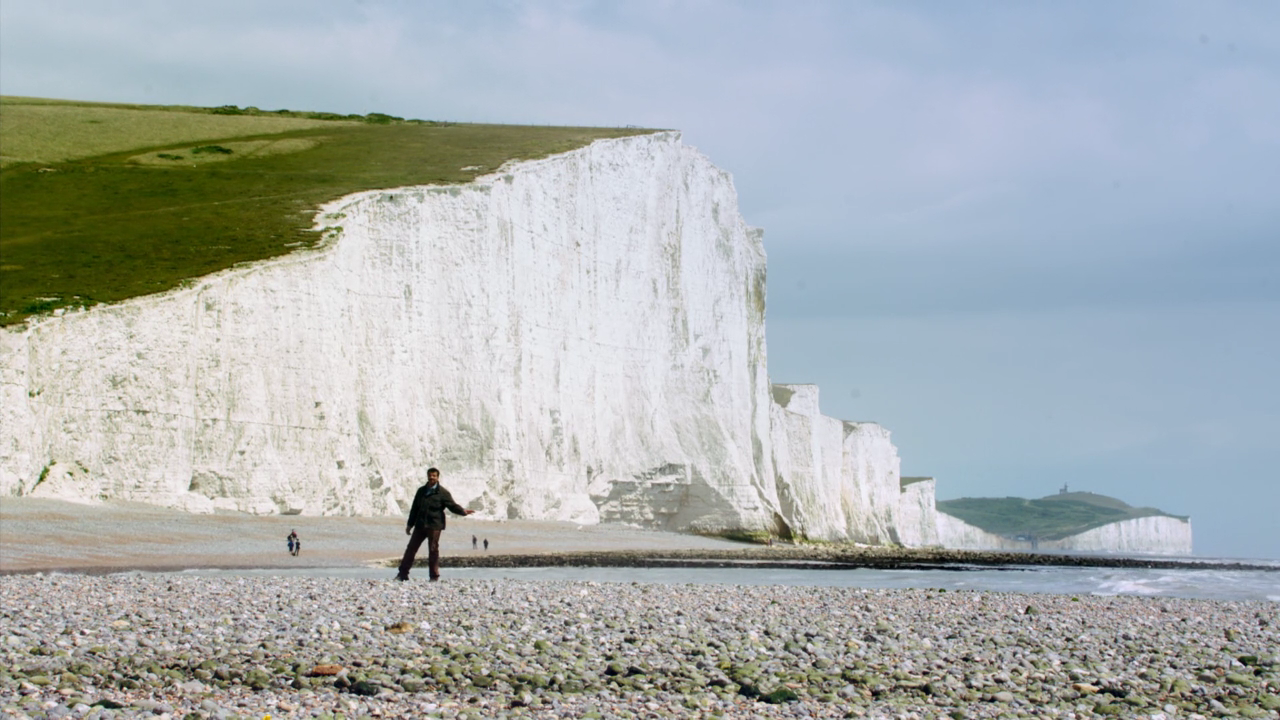 The world is a beautiful place, full of awe-inspiring sights and teeming with millions of lifeforms. Yet the world is a fragile place, too. Life has evolved within a very delicate balance of elements in the atmosphere. Alter that balance just a little and things can change drastically. We have known about global warming for quite some time now, but we have been slow to do anything about it. Indeed, there are many who deny its implications or even its entire existence. They dismiss the overwhelming evidence simply because it doesn’t fit their world-view. Climate change is a gradual process, and even at its current accelerated rate, it’s not something noticeable to the naked eye from day to day or year to year. And because we can’t see it, it’s hard to accept. But simply because something is hard to see doesn’t make it untrue.

A few episodes ago, in “The Lost Worlds of Planet Earth”, Cosmos explored long-term climate change, looking at the many different kinds of worlds the Earth has been. Most of that climate change has been completely natural. Climate does change on its own over thousands and millions of years, and even without human influence, it would continue to change. That episode also touched on modern climate change, drawing attention to the fact that we are releasing carbon into the atmosphere through the burning of fossil fuel at an incredible rate, and it was the release of carbon from the Carboniferous period that ended the Permian and drastically altered the world’s climate.

In the most recent episode, “The World Set Free”, Cosmos returns to the topic of climate change and this time looks closely at human-created climate change and the phenomenon of global warming that we must deal with today. There is absolutely no reason any of this episode should be controversial, and yet there are many that will make it so. Still, this is knowledge that we must absorb and Cosmos, in its usual way, presents it clearly and accessibly, and in an entertaining fashion. 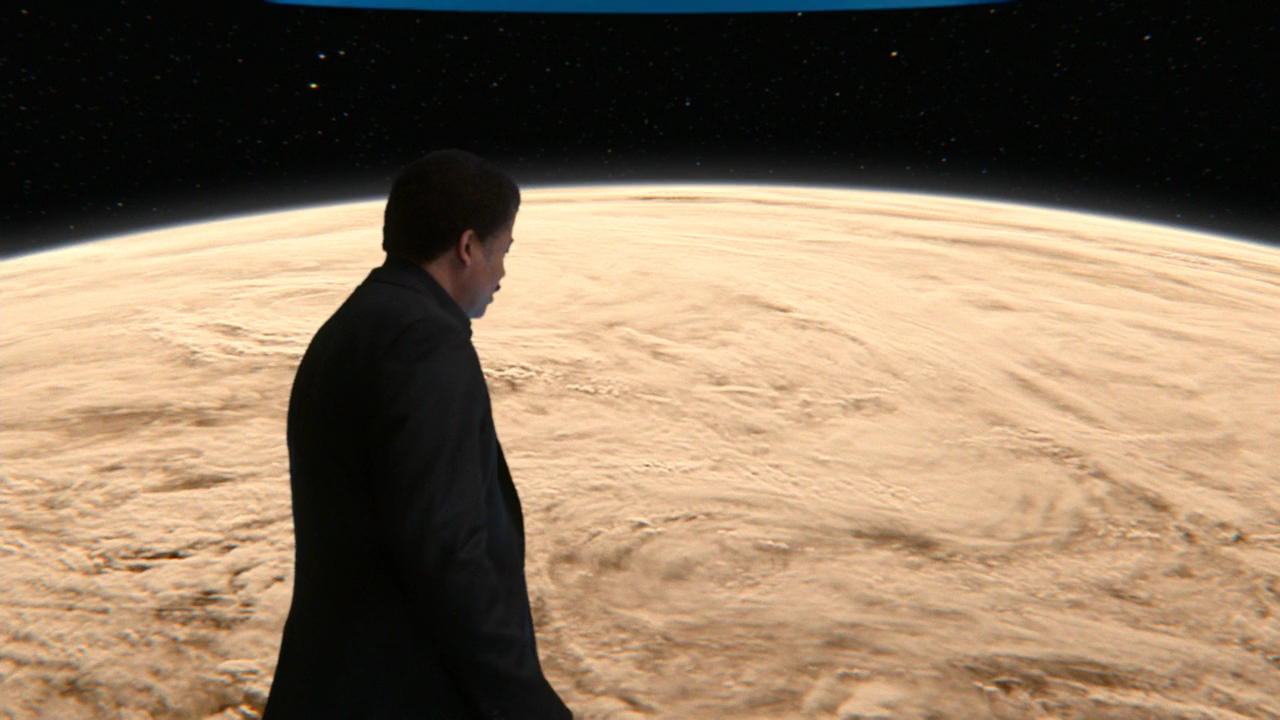 The episode begins with a look at Venus and what we think it might have been like in the early years of the solar system, a couple billion years ago. Venus had oceans back then and may well have been a paradise. But along the way, Venus lost its oceans and fell victim to a runaway greenhouse effect. Now it’s one of the hottest places in the solar system and this isn’t because it’s closer to the sun than Earth. It’s because of the carbon dioxide in its atmosphere which traps the heat of the sun. Venus and Earth started with roughly the same amount of carbon. However, without its oceans to reabsorb it, volcanic eruptions on Venus left that carbon almost entirely in the atmosphere, whereas on Earth, there has always been a delicate cycle of carbon release and reabsorption.

There’s actually not a lot of carbon dioxide in the atmosphere, historically less than 300 parts per million (although that has risen alarmingly now). It doesn’t take much to make a change. No carbon dioxide at all in the atmosphere would leave the Earth as a completely frozen ball, and not even twice as much would make the world uncomfortably hot and cause major problems—although nowhere near the level of Venus.

Neil deGrasse Tyson is quick to stress that Venus’s runaway greenhouse effect was entirely natural. Nature is quite capable of destroying the world on its own without human intervention. So, if nature is capable of such devastation (and we’ve seen it here on Earth before with the various mass extinctions, ice ages, and so on that have occurred over the last few hundred million years), how can we be sure that the climate change we are experiencing now is not also natural and, in fact, human-caused? The episode proceeds to take a look at the answers to this question, starting with an examination of volcanic eruptions. 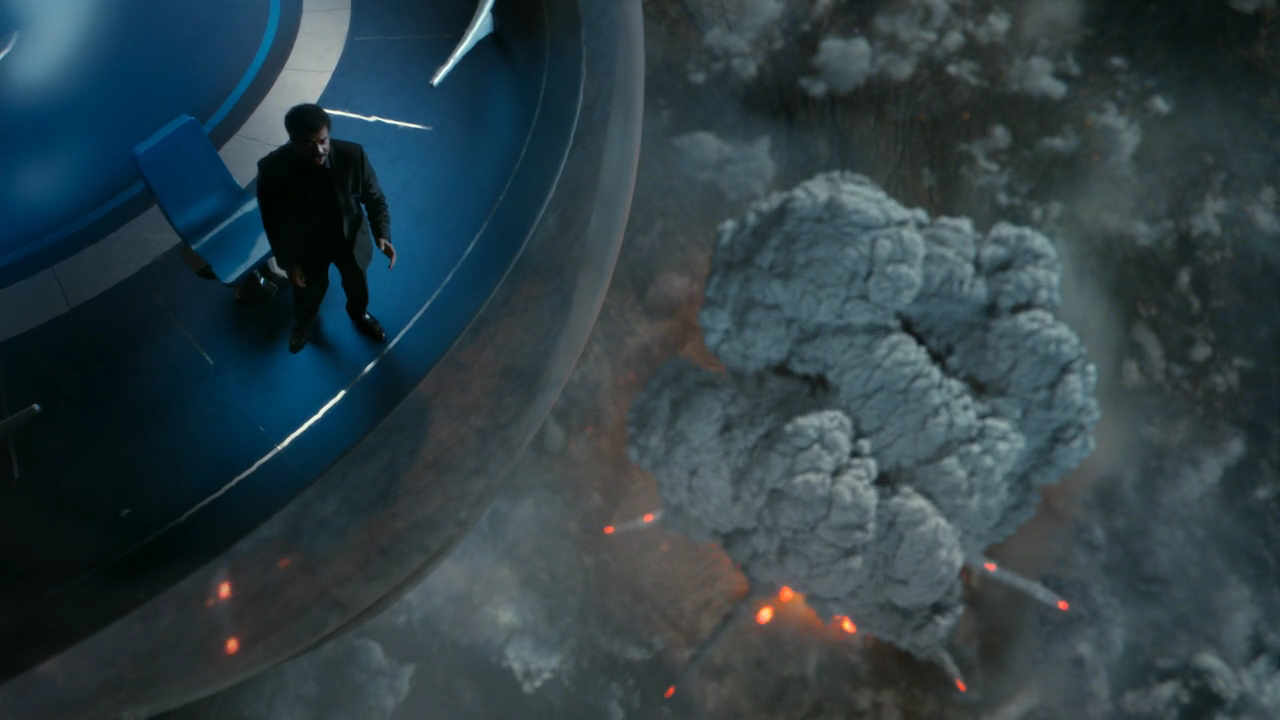 Volcanoes do, indeed, release large amounts of carbon dioxide into the atmosphere—on the order of five hundred million tons annually. As Tyson says, “Sounds like a lot, right? But that’s not even two percent of the thirty billion tons of CO2 that our civilization is cranking out every year.” More than that, volcanic CO2 has a different signature (atomic weight) to that of CO2 from the burning of fossil fuels, and the measurements taken of CO2 in the atmosphere show it to be the fossil fuel burning kind, not the volcanic kind.

Later in the episode, Tyson also examines another argument for natural global warming: that the sun is responsible. However, we have been monitoring the sun for decades and its output has remained unchanged. More so, global warming has been more pronounced at night and in the winter, which is the exact opposite of what would be expected from increased solar output, but exactly what is expected of increased CO2 in the atmosphere.

One of the things I continue to like so much about Cosmos is the way it does more than just explain things in words. Tyson’s narration is great, and as an auditory learner myself, I appreciate it greatly. However, the visual representations, animation, and computer effects go a long way to making the material easily accessible to the average viewer. One of the best examples of this can be seen in this episode and it doesn’t take any fancy computer effects to achieve. 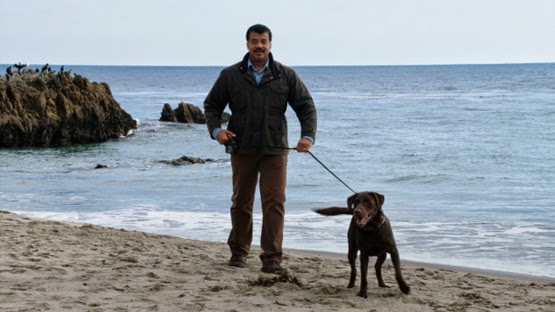 One of the biggest misunderstandings people have about global warming is the difference between climate and weather. Predicting the weather is pretty hit and miss at times, and long-term forecasts are pretty much useless. Given that, how can scientists be so sure about climate changes? How do they know that, next year, everything won’t suddenly start cooling down? In fact, here in Toronto where I live (and in much of southern Ontario and the northeastern United States), we just had one of the coldest and snowiest winters I can recall having in the past twenty years or more. So much for global warming, right? I’ve actually seen people say that, completely ignoring the fact that such winters used to be much more common and are now comparatively rare. Tyson very neatly unravels the confusion between climate and weather with nothing more than a walk on the beach with his dog. The dog wanders all over the place, but still maintains an overall direction of travel because he’s on a leash held by Tyson. Tyson himself walks in a straight line. I really can’t think of a better way to show the difference than this. The dog represents the randomness of weather, while Tyson represents the predictability of climate. The weather can change drastically from day to day, but over the long-term, climate is very predictable. 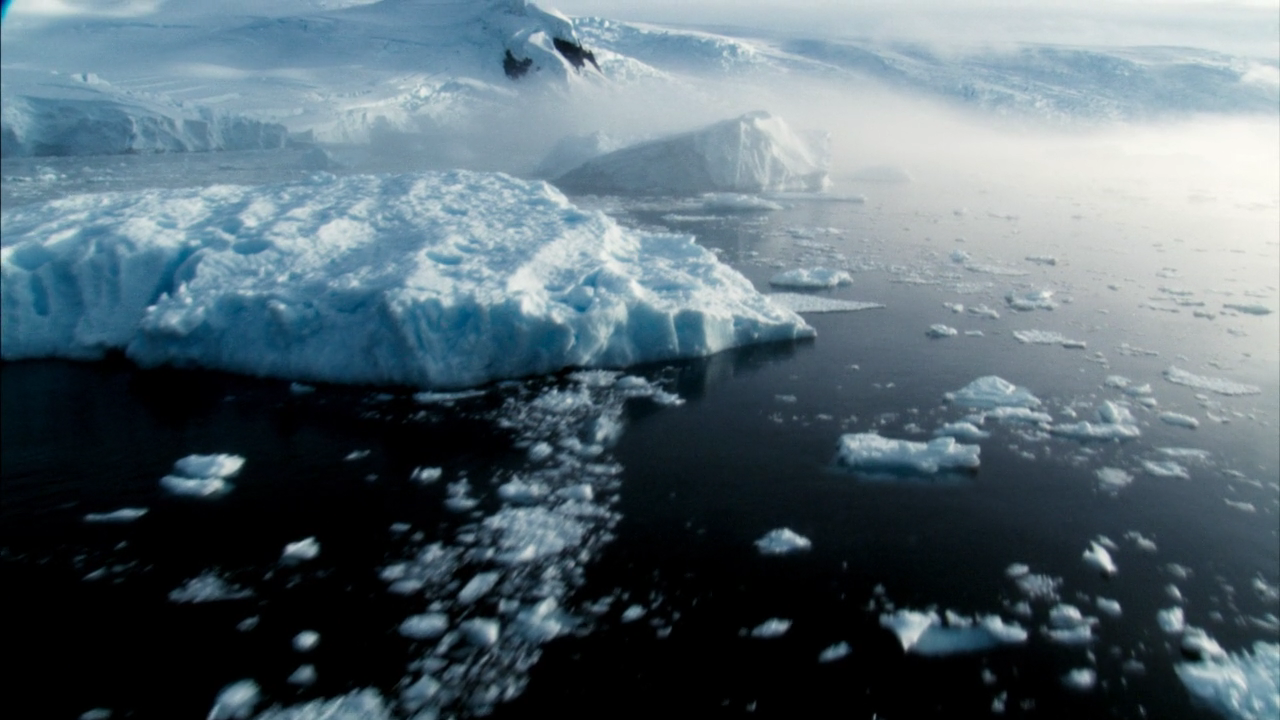 The episode also clears up some other misconceptions about global warming, noting that the majority of the warming is in the oceans. The warming oceans are causing the polar ice caps to recede. Ice reflects heat, but liquid water traps it. As the ice melts, less heat is reflected, meaning the oceans heat up even more. It creates a positive feedback loop (and positive here is not a synonym for good).

But “The World Set Free” is not all doom and gloom. Indeed, as the title implies, there’s much to hope for. Venus’s fate was unstoppable, but Earth is not in the same situation as Venus, and it’s still possible to stop global warming on Earth and maybe even reverse it. The episode spends considerable time looking at the options open to us, in particular on solar power. I was actually rather surprised to learn that the first solar generator was invented in the 19th century by Augustin Mouchot (whom I hadn’t heard of before), but he lost his funding to coal. The episode then tells us of Frank Shuman’s attempts to place solar generators throughout the Sahara Desert just before the outbreak of the First World War. In typical Cosmos manner, the episode uses history to teach us about the things we could be doing now. 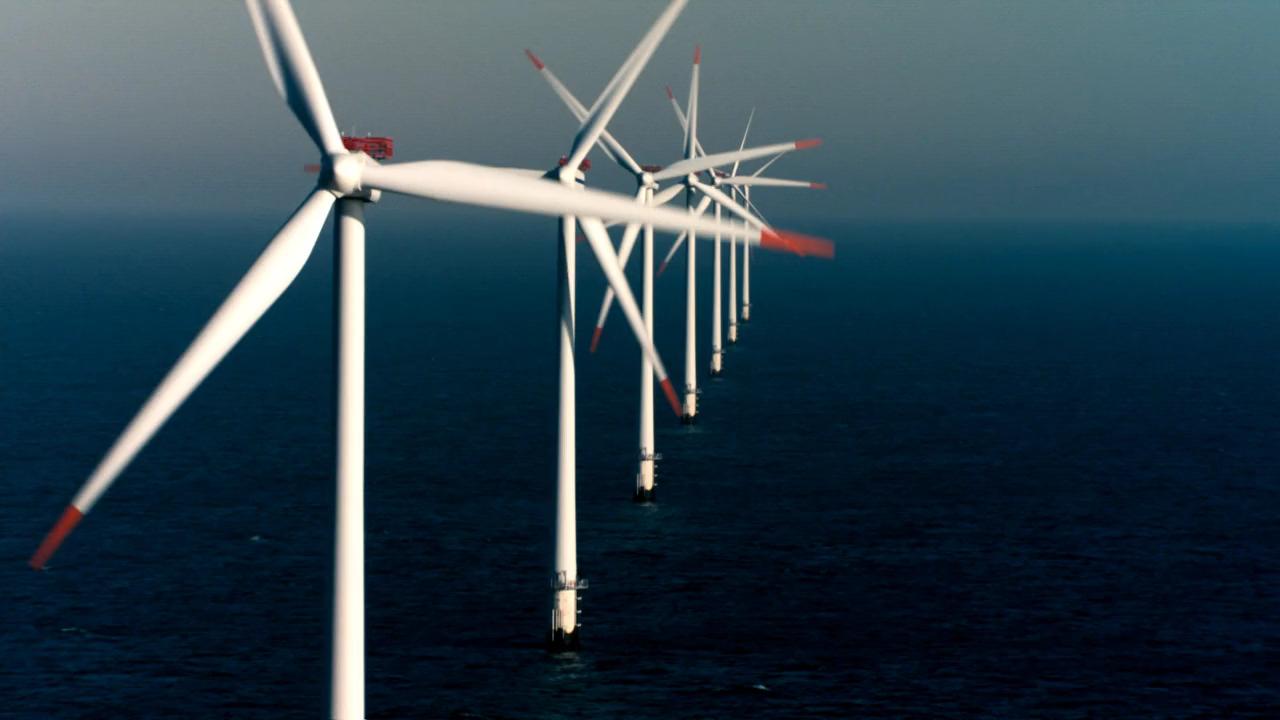 Touching on wind power as well as solar, the episode also shows us how, ultimately, everything goes back to the sun. Wind is reliant on the sun to form, and so even are the fossil fuels we burn. Without the sun to provide the original energy, those fossil fuels would never form in the first place. Even if, somehow, we are wrong about global warming, doesn’t it make more sense to go to the source for our energy? Isn’t it more efficient? Every day, more energy than we could possibly need bombards this planet from the sun. All we need to do is collect it. 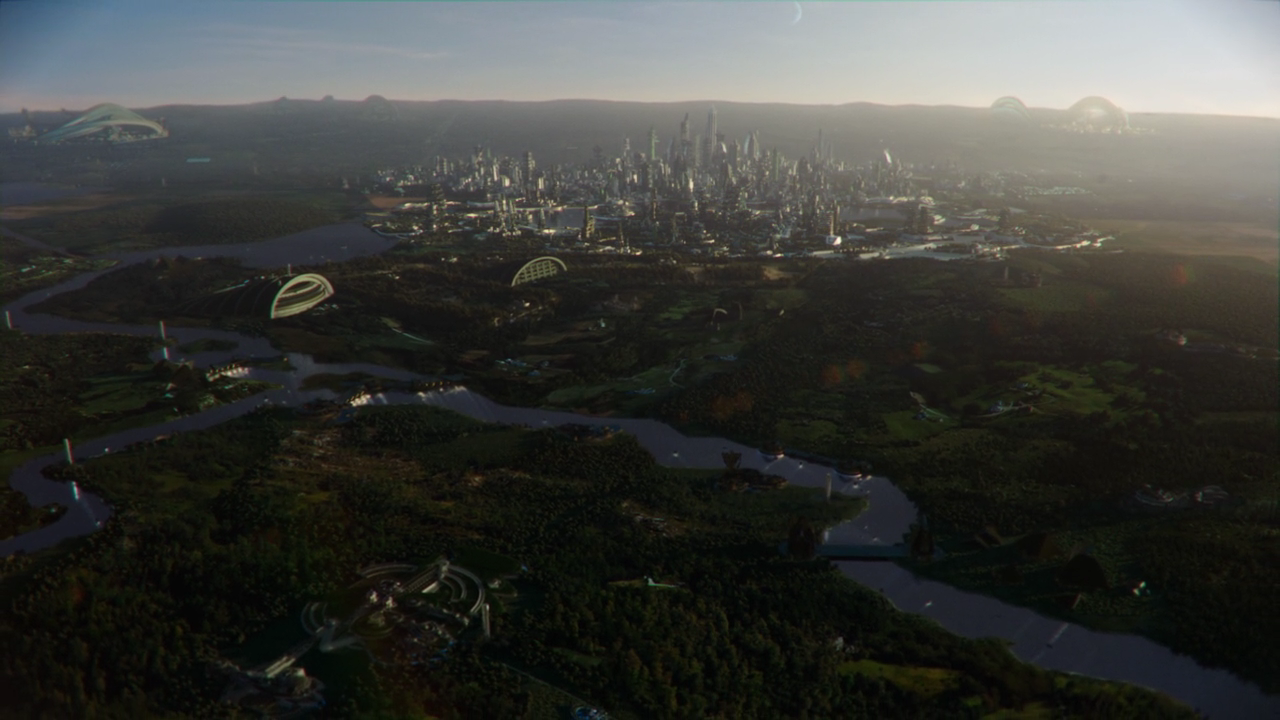 But first, we need to take our fingers out of our ears and stop attempting to drown out the things we don’t want to hear. Science is about evidence, not opinion, and the evidence points in only one direction. Changing our ways won’t be easy; it’ll be pretty damn hard, but humanity has often been at its most inventive when faced with the greatest difficulty. To illustrate this, “The World Set Free” ends with a look at the race to the moon, which came about because of the nuclear arms race. It includes John F. Kennedy’s famous words about why America should go to the moon: “Not because [it is] easy, but because [it is] hard.” Cosmos has done a great job presenting the situation for us; now it’s past time to take what we’ve learnt and do something with it.
Posted by Michael Ray Johnson at 23:34