People of the North 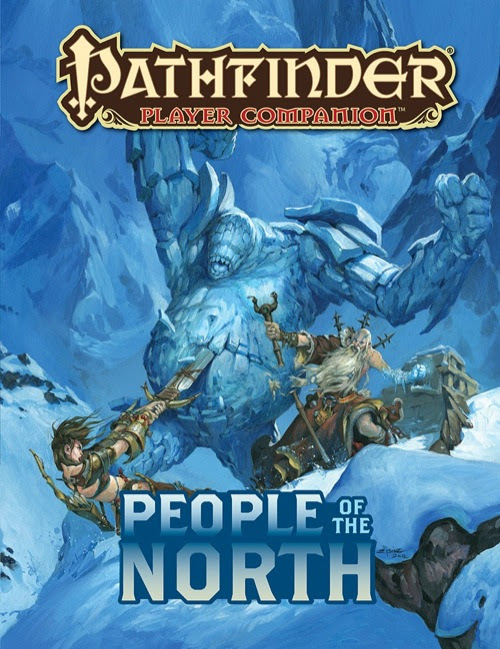 When it comes to books from the Pathfinder Campaign Setting and Pathfinder Player Companion lines, I often find that my favourites are the regional sourcebooks, the ones that look at a specific area of Golarion (or sometimes beyond, as with Distant Worlds). While the books about races or monsters or organizations are often very useful and entertaining, they don’t quite grab my attention the way the regional books do. As such, the regional books are ones that I most look forward to opening up and reading. People of the North, the latest Player Companion book, was certainly no exception to this. It has also helped ensure that I will continue to view regional sourcebooks as being the ones to look forward to most.

When Varisia, Birthplace of Legends came out, it set a new bar for quality in the Player Companion line. While the Player Companions that have come out since have been good, they haven’t quite reached that bar again—until now. People of the North once again shows just how good and useful the Companions can be. This book provides everything a player needs to design a character for a campaign set in the far north of the continent of Avistan, particularly in the Lands of the Linnorm Kings, Irrisen, or the Realm of the Mammoth Lords. The book also provides some details for characters from the Crown of the World, including the Erutaki and the Snowcaster Elves.

As with all Companions since Varisia, People of the North opens with a “For Your Character” section, which highlights the kinds of characters the book is most useful for. It then follows with an overview of the north before moving into detailing the races of the north. Of the races, Kellids, Ulfen, and Snowcaster Elves get a full two pages each covering basic details, as well as new traits and roles. Each of these three races also gets a sidebar on sayings common to that race. These and several other sidebars that appear throughout the book (including ones on common knowledge about the north and the “Unwritten Rules of Fighting”) are amongst my favourite parts of the book. They add colour to the setting and bring it alive in ways that dry description can’t achieve.


The Erutaki and Jadwiga each get a single page, covering the same things as the previous races, but with only a single role and a single trait for each of them. While I would have appreciated a full two pages on each of these as well, I understand that there is only so much space in the book and some things needed to be prioritized over the others. There is also very brief information on several other races, including dwarves, gnomes, Tians, and Varki.

After the races, the book discusses the three principal countries of northern Avistan and includes roles and traits for each one. Each one also includes a wonderful scenic picture giving an idea of what these places look like.

For those interested in “crunch”, People of the North has quite a lot of that too. In addition to the traits I’ve already mentioned, there are new feats, archetypes (including a viking archetype for fighters), spells, gear and magic items. There is also a new oracle mystery: winter. Most of these items and abilities do a good job, too, of adding flavour to the setting rather than just being generic somethings that do cold damage. While there certainly are things that do cold damage (like the snowball and flurry of snowballs spells), there is also generally a clear place for each item or ability within the setting. Hex nails, for example, show how the common people of Irrisen try to protect themselves against the White Witches that rule over them.

The inside covers of the book contain useful references. The front provides a single paragraph description and a lightly detailed map of each of the three main lands covered on the book—useful for very quick referencing during a game. More useful, the back inside cover contains an index of all ice and snow spells in Pathfinder and where their descriptions can be found.

For people who will be playing in the Reign of Winter adventure path, there is also a brief “Player’s Guide” containing tips and campaign traits for that campaign. This is information that will also be in the Reign of Winter Player’s Guide (which will be released next month alongside the first instalment of that adventure path) and, as such, it may seem a bit redundant to have the same information available in two places. However, people playing in Reign of Winter are likely to turn to People of the North for some inspiration. Likewise, people planning northern characters but without a campaign to play them in yet might find the mention of Reign of Winter useful. While I do think these two pages could have been put to better use (perhaps even shortening it to one page with directions to turn to the Reign of Winter Player’s Guide if you want more information), they don’t really bother me that much and I don’t begrudge Paizo the cross-advertising.

The two pages that did bother me a little, however, are the centre two pages. It’s become clear now that the new format to the Player Companion books will include a spread on the centre two pages of every book—a decision I feel is very limiting. While it worked for the map in Varisia, Birthplace of Legends, the recent books (Blood of the Night and now People of the North) seem to be struggling to find something relevant to put there. This book contains a section on travelling in the north: how to avoid common mistakes and survive. There is also a list of arctic gear. While all of this is very useful information and I’m very happy to see it included, it is again spread out over too much space, separated into four blocks placed over top a two-page illustration of iconic cleric, Kyra, decked out in winter gear and trudging through snowy mountains. While it is a nice picture and I do think Pathfinder books need more landscape illustrations, this picture doesn’t really convey much in the way of information and certainly doesn’t need to be as large as it is. Indeed, the written information could easily fit on one page and the picture could be reduced to a half-page spread at most, leaving at least half a page for more information. There’s a lot that can fit into half a page. I really hope Paizo reconsiders the inclusion of the centre spread in future Player Companion books. If it makes sense and works for the particular book (such as the map in Varisia), by all means, include it. But don’t force its inclusion when there’s nothing appropriate to include there.

However, I’m not going to complain too much about losing potentially an extra half-page of material. Overall, People of the North is an excellent book. It contains just about everything I could want to help players create characters for a northern campaign. Unfortunately, I had a northern campaign just finish a couple weeks ago, but at least I know that I’ll have this book available in the future should I set another campaign in this region.
Posted by Michael Ray Johnson at 22:13