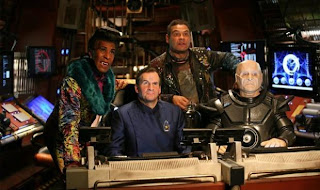 I'm a bit embarrassed to say that I almost missed this date. With this year being the 50th anniversary of Doctor Who, it almost slipped past me that it’s another anniversary year as well: the 25th anniversary of Red Dwarf, which aired on BBC2 for the first time on 15 February, 1988. Of course, I didn’t see it on that day. In fact, I’m not sure when exactly I first saw Red Dwarf. It was on the Canadian station YTV, which picked it up around the time of the third series (I recall this much because I remember the initial previews that ran on YTV showed scenes from “Backwards”, the opening episode of Red Dwarf III). I do remember that the very first episode I saw still managed to be “The End”, the very first episode, although I’m pretty certain this was on a repeat viewing after YTV had already run the first three series and then had cycled back to the beginning. Whenever it was, I was hooked from that very first episode. I laughed so loud and continuously through it that I received numerous complaints from my brother who was watching it with me, but who didn’t enjoy it quite as much as I did.

I watched every episode after that—well, until YTV decided not to purchase new episodes after Series IV. I guess the show just wasn’t doing well enough for them. They didn’t even air the final two episodes of Series IV until after they had moved the show to a late-night timeslot, at which point they just cycled repeatedly through those first twenty-four episodes airing five nights a week at 1:30 a.m. (or thereabouts). Eventually, they dropped the show entirely. I knew there were newer episodes, but there was no way to see them. No other Canadian stations carried the programme. PBS in the States did, but the only PBS station we got was one of the ones that never carried it. (They never carried Doctor Who either. I was always annoyed at that PBS station for seemingly being the only one that didn’t carry my favourite shows.) So I had to wait for the episodes to come out on VHS, and when they did, I snatched them up immediately.


Getting the VHS releases also allowed me to see just how much YTV had cut out of the early episodes. As a commercial station, they had needed to cut them down for time reasons, but the sections that had been cut were also the more risqué moments of the show (such as when Kryten’s replacement in “The Last Day” demonstrates his strength by breaking a brick without his hands). YTV stands for Youth Television, so they were clearly editing out the moments deemed inappropriate for younger viewers. I was always amused, though, that they never edited out the numerous “two-finger salutes” that appeared throughout the programme. As that version of “flipping the bird” is completely non-existent in North America, they either felt nobody would care or (I suspect more likely) they didn’t recognize it themselves.

The thing that drew me most to Red Dwarf was that it was completely unlike anything else on television. First off, it was a sitcom, complete with live-audience laughter, that was also science fiction—a combination that was virtually unheard of and is still virtually unheard of. Even the few other shows I’d seen that could claim to be science fiction sitcoms, such as Alf, weren’t really all that science fictiony. They were just standard sitcoms about dysfunctional families that just happened to have an alien living with them—or something like that. Red Dwarf, on the other hand, had all the science fiction trappings. It was set on a spaceship in the far future—the extremely far future, in fact. But more than that made it unique. Unlike most science fiction, there weren’t any aliens. There weren’t any space battles (not at first, anyway). Instead, there was just a small cast: the last human left in the universe, forced to live his life with a hologram, a creature that evolved from his cat, the ship’s computer, and later an android. It was a character show through and through, hilarious and often touching.

It’s hard to believe that it’s been twenty-five years since the show began. It doesn’t feel like that (well, I suppose that’s natural, since it’s only been twenty-two or twenty-three years since I first saw it, but it doesn’t even feel that long). I suppose that’s partly because it’s never fully gone away. It’s had a few lengthy gaps (between Red Dwarf VIII and Back to Earth, for example), but it keeps coming back. Red Dwarf X just aired last fall. And throughout its twenty-five years, it’s managed to remain fresh and funny. Sure, some moments have been better than others, but it’s never been stale. Its continuity has changed a few times, which is something that used to bug me a little, but never a great deal, and now it just seems part of its charm. As can be seen from my reviews of Red Dwarf X, I enjoyed the most recent series a great deal, and I am confident in the show’s ability to continue to deliver enjoyment into the future. Red Dwarf XI isn’t confirmed yet, but it seems very unlikely that it won’t happen. I will eagerly watch when it arrives. And even if it doesn’t for some reason, I’ll always have my DVDs of all ten series to watch whenever I feel like it. No more relying on late-night broadcasts! Red Dwarf will always remain a show that I have a great deal of affection for.

P.S. Check out this interview with Doug Naylor on the official Red Dwarf site.
Posted by Michael Ray Johnson at 19:31