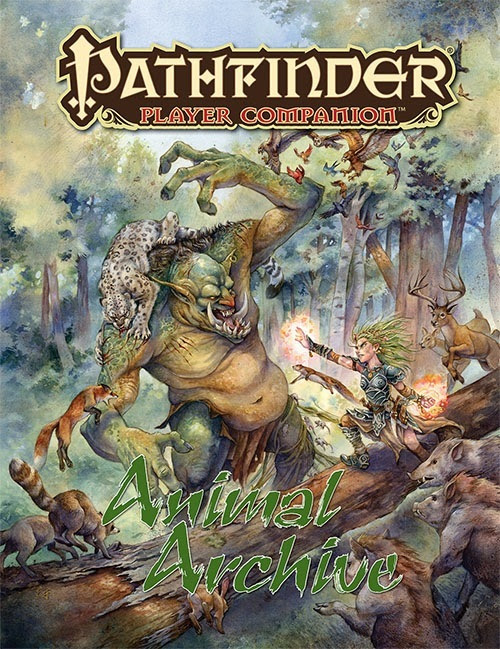 I think, across my various reviews, it’s become fairly clear that I’m generally drawn more towards the “fluff” material: world details, story lines, things like that. I’m less interested in “crunch”: the game mechanics like new feats, spells, and so on. But that doesn’t mean I have no interest at all in crunch, especially when it’s crunch that is both good and useful. This is certainly the case with Animal Archive, the latest in the Pathfinder Player Companion line. This is a book with everything you could ever want for fleshing out your characters’ familiars, animal companions, and pets. It’s really a quite remarkable book, containing more material than I ever expected of it—new animal companions and familiars, feats specifically for animals, archetypes for animals, and more—all neatly packed into just thirty-two pages.

One of the best things about this book is that it moves away from the tried and true. New feats, new archetypes, new spells—these are things that have been done to death for the character classes. However, while the game has had tons of cool stuff for your druid or wizard or ranger, your animal companion or familiar has often been neglected. There are very few feats or spells in the game that are for animals (either to use themselves or be used on). There aren’t even very many magic items designed for animals, and it’s often unclear how well items designed for humanoids work with animals. As such, Animal Archive fills a need. It uses the kinds of things we’ve seen before, but uses them in an area that very rarely sees use.

One striking thing that readers will notice immediately upon opening the book is that on the inner front cover is a list of animal magic item slots. As I said, it’s often unclear what kinds of normal magic items animals are capable of using. This extremely useful chart breaks up animals by body type and lists exactly what magic item slots they have (and thus what kinds of magic items they can use). The chart also includes lists of specific animal companions and familiars that fit into each body type.


At the opposite end of the book, on the inner rear cover is one of the few bits of fluff in the book: a list of the gods of Golarion and the animals most associated with each one. Some of these are obvious (such as Erastil’s association with elk and deer), and some are less so (such as Pharasma’s association with whip-poor-wills and elephants). It’s a little touch that adds a great deal of flavour to the gods and their associated religions. In the pages of the book itself, you’ll also find a list of the animals most often associated with each of the principal races.

Of the archetypes in the book, there are three that are for characters. Two of these go the route of providing a familiar (in the case of the carnivalist rogue archetype) or an animal companion (in the case of the mad dog barbarian archetype) to classes that don’t normally get them. It’s always a risky thing creating archetypes that provide one class with the abilities of another class. It runs the risk of making the abilities less special if everyone can get them. Luckily, the book doesn’t go overboard here, and both the carnivalist and mad dog are interesting variants on their respective classes. The remaining character archetype is by far the most interesting, however. The huntmaster is a cavalier archetype that replaces the cavalier’s mount with either a bird or dog animal companion. On top of that, the huntmaster gets to have a whole flock or pack of animal companions by dividing up his levels between the animals. Having a whole bunch of animal companions can cause some game-play issues (by slowing down combat) so some gamemasters may be leery of introducing the huntmaster. A whole bunch of animal companions is also a little risky on the PC’s part, as they’ll each be weaker than a single companion and thus more likely to be killed. Nonetheless, the huntmaster is an extremely flavourful archetype and I’ll happily include it in my own games.

While archetypes for PC classes are pretty run-of-the-mill, Animal Archive does something different. It introduces archetypes for animals. Each archetype specifies whether it’s for a companion or a familiar in the same way that class archetypes specify a class. And much like standard class archetypes, animal archetypes replace various special abilities normally gained by familiars and companions with new abilities. Altogether, there are seven animal archetypes, from bodyguard to infiltrator to totem guide. My personal favourite is the valet, a familiar archetype that allows the familiar to assist in magic item creation and various other jobs its wizard requires.

The feats and spells in the book are also useful and creative. Boon Companion (which is actually reprinted from an earlier book) is great for rangers and multiclass druids—or even multiclass wizards as a change to the feat from its earlier version allows it to affect familiars (unfortunately, it still only refers to effective druid level; an editing error, no doubt). Bleed for your master and die for your master are two particularly flavourful spells. They’re rather creepy and disturbing (as they allow you to force your familiar to take damage that you would normally take), but are great for immoral or evil spellcasters.

Animal Archive also contains several new animal companions and familiars. There are the llama, moose, panda, and walrus for animals companions, and the armadillo, platypus, rabbit, and squirrel for familiars. There is also a complete chart of all the familiars and the abilities they grant their masters from all the various books published for the Pathfinder Roleplaying Game (although, oddly, it misses the rabbit from this very book, while still having the other new familiars—presumably an oversight).

“Intelligent Animals” is one particularly interesting section. It provides advice on handling animals that have had the awaken spell cast on them (the spell that grants animals human-level intelligence and basically turns them into characters). It looks at several broad groups of animals (such as avian or primate) and provides suggestions for typical personality types and the kinds of weapons and equipment they can use.

Animal Archive doesn’t just limit itself to animal companions and familiars, however. It also has material useful to characters who simply purchase an animal as a pet (or find one in the wild) and who train it using the Handle Animal skill. There are complete pricing charts for purchasing animals, as well as animal equipment and magic items for animals. There is even a section containing new tricks that can be gained through the Handle Animal skill.

Alas, it’s the “Animal Tricks” section that is the only part of the book that I have any significant issues with. When I first started reading the section, I thought it was a great idea. I’ve often felt there are things you should be able to train animals to do that aren’t covered by the current tricks of Handle Animal. However, it quickly became apparent that this section falls into a trap. In some ways, animal tricks can be thought of as like skills (although animals have skills too). Even during the worst glut of 3.5, when new classes, feats, prestige classes, spells, etc. were being published in huge numbers, the designers very wisely rarely introduced new skills. There were a couple introduced for psionics, but that was pretty much it. This is because skill points come in a very limited quantity, and after too many skills, each new one basically becomes just a variant of another. Ultimately, that just limits characters more rather than giving them new options, as they become less capable of being diverse than they were before. Pathfinder even consolidated several of the 3.5 skills to make skill deprivation less of a problem. The “Animal Tricks” section makes the mistake of adding too much and subdividing abilities too far, now requiring animals to learn a trick in order to flank in combat, for example. First off, many animals (dogs and wolves, for example) instinctively flank when they attack other animals. They don’t need to be trained to do this. But even putting that aside, there is already an attack trick, as well as combat training and fighting general purposes. If these things don’t already cover flanking, then it becomes much, much harder to have an effective animal companion or friend. Animals get an extremely limited number of tricks they can learn (animal companions get bonus tricks, but even their number is still limited). Requiring tricks for flanking or aiding another or even tripping (with the maneuver trick) doesn’t really expand the animals’ options. Instead, it decreases their effectiveness since most animals will never have enough available tricks to learn them. On top of that, it creates more work for both the GM and the players, as people have to keep track of more details determining what they can and can’t do in combat. That said, there are some tricks in this section (such as bury or serve) that cover areas pre-existing tricks don’t, so I’d advise GMs to be selective about which tricks they allow in their games.

In my reviews of recent Pathfinder Player Companion books (here and here), I have heavily criticised the two-page centre spread in each book as containing a lot of wasted space and poor use of what is otherwise excellent artwork. I’m happy to say that Animal Archive does not have this problem. It still has a two-page spread, but it uses its spread much more effectively. These two pages contain information on “Animals of the Inner Sea”, a selection of animals that are unique (i.e. not existing in the modern real world) to the campaign setting but are still normal animals (as in they have the animal type, not magical beast or some other monster type). Each animal has a brief description, along with pictures and a map showing where in the world that animal can generally be found. This centre spread makes very effective use of both space and the artwork. It both looks gorgeous and serves a useful purpose.

Overall, Animal Archive is an excellent and extremely useful book. While it may go a little overboard with the animal tricks, it provides tons of useful and flavourful archetypes, feats, spells, magic items, and more. This is a book that will certainly see a lot of use in my games.
Posted by Michael Ray Johnson at 21:04