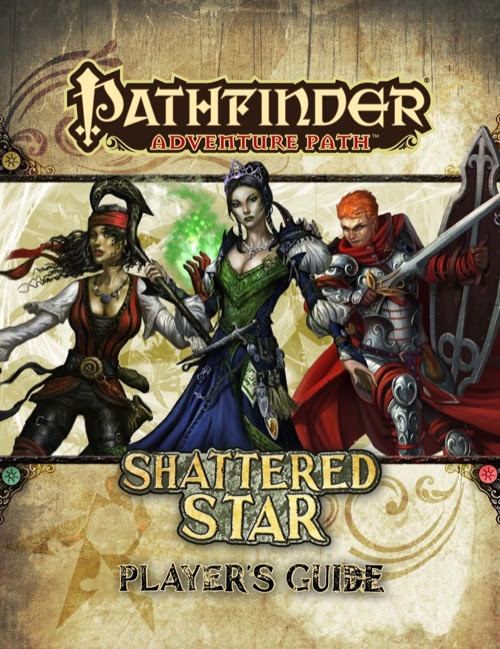 In general, I’ve found the player’s guides for the various adventure paths to be of mixed quality. Some do the job or preparing PCs for the adventure path to come quite well, while others are not so good at it (and sometimes even seem to create a false impression). One of the problems is, how much information is too much to give to the players before the game even begins? Different gamemasters will have different views on this, and satisfying all of them is a virtual impossibility.

As lukewarm as I feel towards the Shattered Star adventure path, the Shattered Star Player’s Guide is one of those that does its job well. Like most of the player’s guides, it’s short (12 pages total including cover and title page—so really only 10 pages), but it’s filled with information that is useful for the campaign. It begins with a few basic tips, then moves straight into the campaign traits. It doesn’t spend much time on how the different classes and races fit in the campaign (like many of the other AP player’s guides do), as there really isn’t any need for that in Shattered Star. It draws attention to the fact that the campaign is focused on ancient dungeons and so suggests that characters with mounts or animal companions might find large animals a liability, but that’s about it. In dungeon environments, there’s little else about any one specific class or race that stands out or needs discussing.


The campaign traits are quite straight-forward. As Shattered Star has one of the loosest encompassing stories of all the adventure paths, there is no need for the campaign traits to weave complicated backgrounds for the characters. Player characters could easily not take a campaign trait (taking a different kind of trait instead), and not really have that affect how the AP plays for them. That said, these traits all provide useful abilities on par with other traits. There are also several traits relating to the Pathfinder Society that are reprinted from the Faction Guide.

Following the traits, the Player’s Guide presents some basic background information on Magnimar, the home city for the campaign. I’m very glad to see this here after the Rise of the Runelords Anniversary Edition Player’s Guide left out any information on Sandpoint, the home base of that campaign. Although Magnimar only really has a strong presence in the first and last parts of Shattered Star, the PCs have several opportunities to return to it between the individual adventures and having access to a little information on the city helps players to create characters who live there. It’s only two pages, but it’s enough to whet the appetite about the city.

The remainder of the book is given over to the information on the Pathfinder Society, and the fame and prestige system used. Fame and prestige measure a character’s renown within the Society, allowing characters to gain favours and boons. The system is essentially the same as the system in the Faction Guide, only with some of the terminology renamed (TPA becoming fame points and CPA becoming prestige points). Characters can use prestige points (PP) to purchase boons such as a free casting of a spell and so forth. Expenditures of large amounts of PP (sometimes requiring a minimum number of fame points) can acquire more interesting boons. Perhaps most interesting is the ability to gain the services of a scribe who follows the party around and writes down their exploits (of course, the PCs also have to provide this scribe with protection). Complete stats for the scribe are provided on the final page of the book.

Overall, the Shattered Star Player’s Guide is one of the better adventure path player’s guides. Shattered Star may not be my favourite adventure path, but this guide does its job of providing players with just enough information to make characters for the campaign. It lays things out in a straight-forward manner and doesn’t provide for any misconceptions. Players in a Shattered Star campaign will get good use out of it.
Posted by Michael Ray Johnson at 22:14