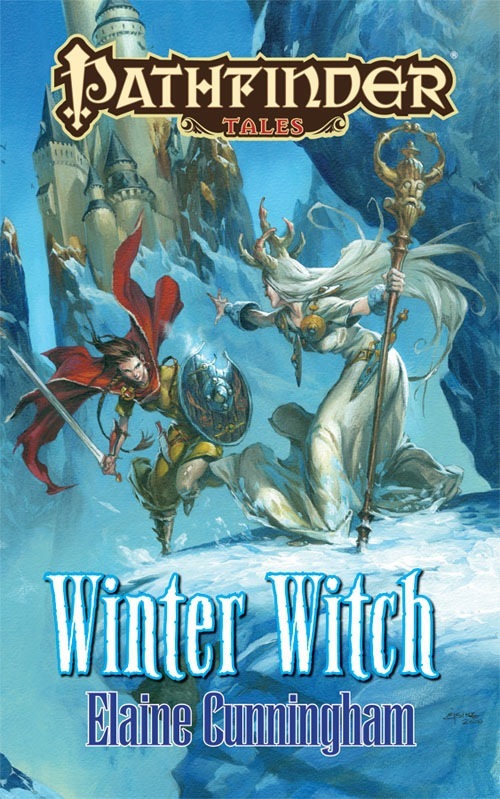 It’s been quite awhile since I last read a novel based on a game world. Years ago, I voraciously read through the Dragonlance Chronicles when that trilogy was first published. I remember enjoying the books at the time, but when I reread them a few years later, my opinion of them diminished considerably. I went on to read numerous other Dragonlance and Forgotten Realms books and a few books based on other game worlds as well. While I found the odd one to be enjoyable (I remember finding The Black Vessel, a book set in the Mystara setting, to be particularly fun to read), I became increasingly disappointed with them the more I read. I found them poorly written, with cardboard characters and plots that were unoriginal, predictable, and dull. Worst of all, they rarely seemed to have much setting flavour, seeming more like generic Tolkienesque fantasy novels that were simply shoehorned into the given setting. Eventually, a little over ten years or so ago, I gave up reading them altogether.

Fast forward a decade. It occurred to me that, while I continued to be quite critical of game novels, not having read any for so long meant that I had no way of knowing whether they were still as bad as they once were, or if the quality had increased. Perhaps they had never been as poor as I remembered, as no doubt my tastes had changed a bit in the passing decade, or maybe I had just poorly chosen the novels I did read (as I certainly didn’t read every novel available back then, only a small sample really). So when Paizo started releasing their Pathfinder Tales series of novels based on the Golarion setting, I began to ponder whether I should pick one up and read it. Recently, I decided to do just that and bought myself a copy of Winter Witch by Elaine Cunningham*. I had read a short story or two by Cunningham and was impressed by them, so I figured her novel would be a good choice to start with.

So, what did I think of it? I have to say I enjoyed it quite a bit. If people were to ask me to give them a list a recommended books to read, Winter Witch would not likely be on it, as it’s hardly an example of great literature. However, if they were to ask me whether Winter Witch is worth reading, I would say yes, as it is thoroughly entertaining. It’s a bit slow early in the book (after an attention-grabbing prologue), but soon develops and gets moving. By the end of the book, it had become one of those books that I simply don’t want to put down because I need to know what happens next. The resolution is particularly elegant. It’s not what you’re expecting when the story starts, but it works because it’s true to the characters and doesn’t happen just because the plot says it should (which was always one of my biggest criticisms of the game world books I read).

Winter Witch follows the story of two main characters. Ellasif is a shield maiden from a small village in the Lands of the Linnorm Kings near the border with Irrisen. Declan is a young Korvosan wizard, who really doesn’t want to be a wizard anymore, and would prefer to be a cartographer. These are the only two point-of-view characters, and the character whose perspective we get alternates with each chapter. Neither is a particularly complex character—Ellasif is a fairly typical Viking barbarian and Declan is a young man uncertain of his place in the world—but they are well-written and sympathetic. Their actions are always believable and not simply dictated by the necessity of plot. Elaine Cunningham has a talent for creating vivid characters without being overly wordy.

The supporting characters likewise come alive as seen through the eyes of Ellasif and Declan. Many of them walk the borderline of being clichés, but there’s always something unique about them that makes them a little more than clichés and turns them into interesting characters in their own right. The most delightful character is, without a doubt, Skywing, a small blue house drake who is/isn’t Declan’s familiar. The principal villain, the winter witch of the title, is also an intriguing character and I wish there had been more interaction between her and the point-of-view characters so that we could start to understand her a little better. There are just enough hints to her motivations (which, while self-serving, are not really evil) that I would have liked to get to know more about her and her background.

Indeed, I also wish the novel had spent a bit more time in Irrisen, where the villain is from. The story centres around Ellasif’s quest to rescue her kidnapped sister and Declan’s quest to rescue his master and the serving girl he thinks he’s in love with. Most of the book is set in Korvosa or the journey from Korvosa to Irrisen. As Irrisen is not a place either Declan or Ellasif want to stay in, it’s natural that they would leave it as quickly as possible. As such, I’m not complaining that there wasn’t more in Irrisen. However, there’s just enough of a glimpse of a truly unique setting to make me desire more.

The novel fits quite nicely into the Golarion setting. Although the plot is fairly generic and a significant portion of the book covers a journey that could pretty much take place anywhere, the opening in Korvosa and the closing in Irrisen ground it quite firmly in the setting. Both are unique places, and the lives and motivations of the characters are tied into these locations strongly enough that it would take quite extensive rewriting and reworking of the characters to take this story and relocate it to another setting. This is a very good mark, in my opinion.

Overall, Winter Witch is not a masterpiece of literature, but it doesn’t need to be. What it needs to be is entertaining, and that it certainly is. It’s perfect to relax and while away a few hours with.

-------
* I was rather surprised to reach the About the Authors section at the end and to discover that the plural is not a misprint. The section includes a short biography of Dave Gross, who has written a couple other books in the Pathfinder Tales line: Prince of Wolves and Master of Devils. He also has a section in the Acknowledgements, which follow the About the Authors. Now, it’s not at all unusual for two authors to collaborate on a novel. It’s also not unusual that one remains a “silent partner” and does not have his/her name printed on the book. What is strange here is that Elaine Cunningham is the only name credited on the front and back covers, but the interior (including the title page, which I missed when I first started the book) credits both authors. I’m not sure why this is the case. If I had to guess, I would suspect that Dave Gross became involved with the manuscript later in its development, perhaps to help out when some external reason made it difficult for Elaine Cunningham to complete the manuscript on schedule. However, this is nothing more than conjecture on my part. The book does not provide a reason, and I have not been able to find any discussion of it elsewhere. Whatever the case, it is not apparent when reading the book that it has been written by two authors. For the rest of this review, I have only referred to Elaine Cunningham as the author.
Posted by Michael Ray Johnson at 13:47