The Sarah Jane Adventures - The Curse of Clyde Langer 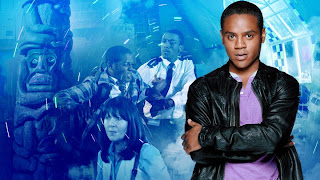 
At some point or other, pretty much every science fiction programme out there does an episode in which one or more characters find themselves alienated from the other characters. Sometimes, everyone else forgets they exist. On other occasions, they become invisible and no one else realizes they’re there. However, while the reason for it might vary, the effect is generally the same: the characters are forced to deal with isolation and loneliness, and through it, learn some lesson about themselves that makes them better people. It’s happened enough times on various science fiction shows that it’s become something of a tired trope. This isn’t even the first time The Sarah Jane Adventures has employed it. However, “The Curse of Clyde Langer” by Phil Ford is quite possibly the best take on it I’ve ever seen. There is real emotion here, with some stunning performances and even a bit of social commentary about homelessness to go along with it. It is definitely one of the best pair of episodes of The Sarah Jane Adventures and even one of the best Doctor Who of any kind. SPOILERS FOLLOW


When Clyde Langer made his first appearance in the first regular episode of The Sarah Jane Adventures after the pilot, he came across as a somewhat stereotypical character. He was the wisecracking kid who’s not so good at school because he goofs off too much, the kind of character who tends to get the other characters in trouble and they have to then save him and themselves. He was a replacement for a similar character in the pilot, and given how poor of a character she was, I suspect many people didn’t expect much more from Clyde. However, his character has grown and developed from that initial stereotype. He has become someone the audience can truly like and care about. We have seen his family life and background, and what shaped him into the person he started out as. We have also seen him change and learn, and be effected by the often-crazy things that happen to him, Sarah Jane, and the others. In my opinion, he is a far more interesting character than Luke, as it’s easy to relate to him. He and Rani also make a great team, and now that Luke has gone off to university, we get to see much more of those two.


Daniel Anthony has always put a great deal into the role and has grown with it. In “The Curse of Clyde Langer”, he gets to truly shine, more so than in pretty much any other episode, even other ones focused on Clyde. He brings across the mixture of emotions that Clyde is going through in a believable and not over-the-top manner. We see Clyde’s fear and frustration, but more importantly, we see just how much he truly cares about Sarah Jane and Rani, and just how much he is affected by their sudden hatred of him. The scenes of Sarah Jane and Rani screaming about how much they hate Clyde are just downright scary (bolstered by stunning performances from Lis Sladen and Anjli Mohindra). Finally, Clyde’s growing affection for the homeless girl, Ellie, is truly touching and his sadness at her loss is heartbreaking.


Speaking of Ellie, she is one of the most instantly sympathetic and believable characters the show has created. Played by Lily Loveless, she provides the perfect counter and romantic interest for Clyde. While last season started developing hints of a budding romance between Clyde and Rani, that hasn’t been seen so far this season, and I’m kind of glad. Clyde and Rani make a great team and great friends, but I’m not convinced by a romance between them. In the case of Ellie, however, in the space of two episodes (the first of which she barely features in), I am convinced. I can’t help but feel that if the series were continuing beyond the last two episodes next week, we would be seeing more of Ellie. Clyde promised not to give up his search for her. Perhaps she will show up in the final two episodes.


I do have one nitpick about Ellie, however. It’s nothing to do with the writing or Lily Loveless’s performance. It’s her costuming and make-up. She looks just a little too clean for a homeless person, her hair just a little too perfect, her teeth a little too white, and...is that even a hint of lipstick? This is pretty standard for television, unfortunately. The good guys and sympathetic characters can never look too revolting. Alas, it undermines the story’s message about homelessness just a little, and might serve to give children watching the wrong impression of what it’s like to be homeless.


That aside, the story does an excellent job of presenting the plight of the homeless. I wasn’t expecting that aspect of the story. Although it was clear from her few short appearances in Part One that Ellie was going to be an important character, I didn’t foresee the examination of homelessness in Part Two. Most other science fiction shows, when doing a story like this, show the isolated characters following their friends around and trying to interact with them. “The Curse of Clyde Langer” does this, too, but it also does what other shows rarely do. It looks at the wider picture of how this affects Clyde’s life as a whole. When everyone he knows has thrown him out, when the very mention of his name sends even people who have never met or heard of him into fits of rage, there’s nowhere else left for Clyde to go but the streets. And what a brilliant end to Part One! Not really a cliff-hanger, but an obvious bridge into a completely new twist to the story, and indication that this story is not going to be what we first thought it was. When the rest of the world has abandoned him, who else should hold out the hand of friendship but the homeless girl he showed kindness to earlier?


What works so well about Part Two’s examination of homelessness is that the viewer is only partially aware that the examination is going on. It’s educational for the children watching and includes subtle commentary for the older viewers, but never seems preachy about it as everything that happens is just a natural growth of the plot. The story is Clyde’s journey and this just happens to be where his journey takes him. The final twist about the “Night Dragon” is utterly brilliant. It provides both hope and sadness rolled together. Throughout the episode, I thought the mentions of the Night Dragon were hints at some longer story arc. It was clearly not what this episode was about, not even as a sub-plot, and I couldn’t help but feel disappointed that, with the series coming to a sudden end soon, we wouldn’t find out more about this strange monster that takes the homeless away. Because that’s what we have come to expect from Doctor Who and The Sarah Jane Adventures: monsters taking people away. Sometimes, they’re obvious monsters; sometimes, they appear to be something innocent or harmless and turn out to be monsters later on. But this time, the monster turns out to be something completely innocent: a haulage company and a friendly truck driver willing to give free rides out of town to homeless people hoping to start a new life somewhere else.


Apart from the make-up issue I mentioned above, the only downside to this story comes again from Sky. Her being the only person not affected by the curse was somewhat predictable, but not a major problem in itself. I’m just not taking to Sinead Michael’s performance, and find it rather wooden. She’s young, of course, and as I said in my review of “Sky” last week, over time she might have settled into the role and done better with it. However, we will never see later on, and even if we did, we can only react to her performance in this story as it is now. Her role in the story is relatively small, however (other than providing the pivotal means through which Sarah Jane and Rani manage to break through the curse), so she’s easy to ignore.


Overall, “The Curse of Clyde Langer” is a wonderful story. It showcases all the best aspects of The Sarah Jane Adventures and thoroughly demonstrates how mature, intelligent, and overall enjoyable this children’s series is. It’s heart-wrenching both from a story aspect and from the knowledge that there are only two more episodes of the series remaining before it is all over. There’s so much more left for the series to show, so many more stories to tell. It’s a true shame that they will never be told. However, at least it will have had a chance to tell a story as good as “The Curse of Clyde Langer”.
Posted by Michael Ray Johnson at 15:01