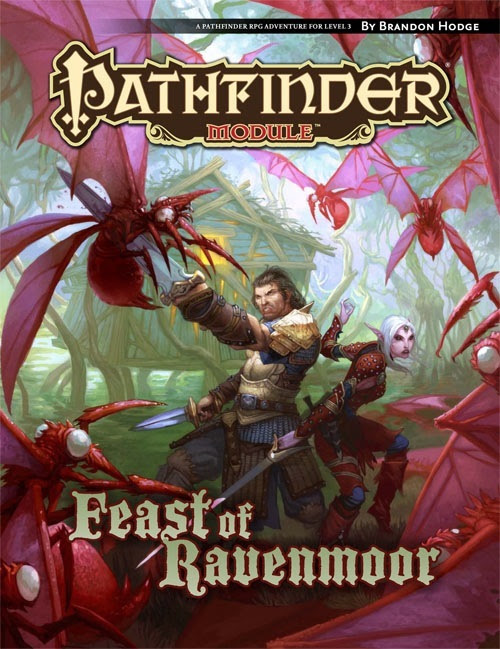 Feast of Ravenmoor, by Brandon Hodge, is an adventure for 3rd-level Pathfinder characters. In it, the PCs are sent to the remote village of Ravenmoor to search for a missing tax collector. Once there, they get to attend the village’s monthly festival and experience the very strange customs of the locals. The adventure is rife with lots of role-playing opportunities. Indeed, depending how the PCs approach their mission, it’s possible to get through this adventure with very little combat at all. Although the story is set in Varisia, Ravenmoor’s remoteness and non-Varisian-like customs make it easy to transplant the adventure to other areas of Golarion or even to other campaign worlds if Game Masters desire. Overall, Feast of Ravenmoor is a straight-forward mystery adventure that should keep players entertained for several sessions. SPOILERS FOLLOW
The thing that makes Feast of Ravenmoor stand out is its setting, which is introduced in a very memorable fashion: the PCs encounter a stirge. A fairly generic monster, but this particular stirge turns out to be a young boy’s pet. Depending exactly how the PCs first react to the stirge, they could end up severely traumatizing the young boy! This is just the first example of how things in Ravenmoor are just a little different than they are elsewhere. The various differences are small, and taken by themselves may seem as little more than quirks, but after a while, they start to add up and the PCs will eventually realize that these people are rather odd indeed. The unusual flavour of Ravenmoor is at the forefront of the entire adventure, from the games at the festival and the food at the feast to the customs of the people and their unusual worship of Desna. The adventure provides a lot of material for GMs to use to make Ravenmoor into a truly memorable place and not just some random village the PCs go to on some random mercenary job.
Although the adventure does a very good job bringing across the flavour of the village and its customs, I do wish it included a few more local personalities. There are very few named villagers who are not members of the cult, and while the cult obviously needs to be the focus since they are the villains of the piece, a few more non-cult characters would have helped to bring the village alive all the more. Game statistics are not needed in this case. A few names and a sentence or two about each would suffice. This is a minor concern, however, and for the most part, Ravenmoor is well-developed.
Amongst the various oddities the PCs discover about the town is the local religion. Although the townsfolk worship Desna, the rituals they follow are just slightly altered from how the PCs might expect them to be. As with everything else about the village, however, the alterations are small and minor when looked at by themselves, but form a larger picture overall. I’m very impressed with how the adventure twists the worship of Desna ever so slightly so that the villagers are unknowingly worshipping Ghlaunder. It gives just enough hint to the players that something is a little off without being blatantly obvious that they aren’t really worshipping Desna. I do have one small nitpick, however, and it’s something of a pet-peeve of mine: the village’s ruined church. Gods and Magic and the article on Desna in Pathfinder Adventure Path #2 very clearly describe the following of Desna as having few temples and those few it does have as being like observatories, sometimes a tower with an observatory on top, but the local Desnan church looks nothing like that. It can’t even be dismissed as being the result of the unusual customs of the village as this church predates those customs and has fallen into ruin due to disuse. This is a common problem in just about every campaign setting I’ve seen, and unfortunately, Golarion is no exception. Sources focused on describing the religions will often describe unique temples and worship locations, but sources focused on other things (such as adventures, city supplements, etc.) generally have every religious site looking like a bog-standard Christian church, complete with a spire and a bell. It particularly stands out in Feast of Ravenmoor as the adventure is otherwise rife with Desnan flavour.
The mystery of Feast of Ravenmoor is actually fairly straight-forward and it shouldn’t prove difficult for the PCs to figure out what is going on. This is not a criticism, but one thing that I really like about the adventure. It doesn’t bog itself down in over-complex plots. The motivations and plans of the mayor and the rest of the cult of Ghlaunder are only as complex as they need to be—which is to say, not complex at all. No one’s planning to take over the world. All they want is to keep their cult going in perpetuity—the perfect low-scale threat for low-level PCs to thwart.
Overall, Feast of Ravenmoor is an excellent little adventure for low-level characters. Groups interested in an adventure that focuses more on role-play than on combat will find the adventure particularly to their liking as there are many opportunities to interact with the locals of Ravenmoor and their secret cult leaders and to avoid combat until the very end. It is also easy to fit into pretty much any ongoing campaign.
Posted by Michael Ray Johnson at 19:05