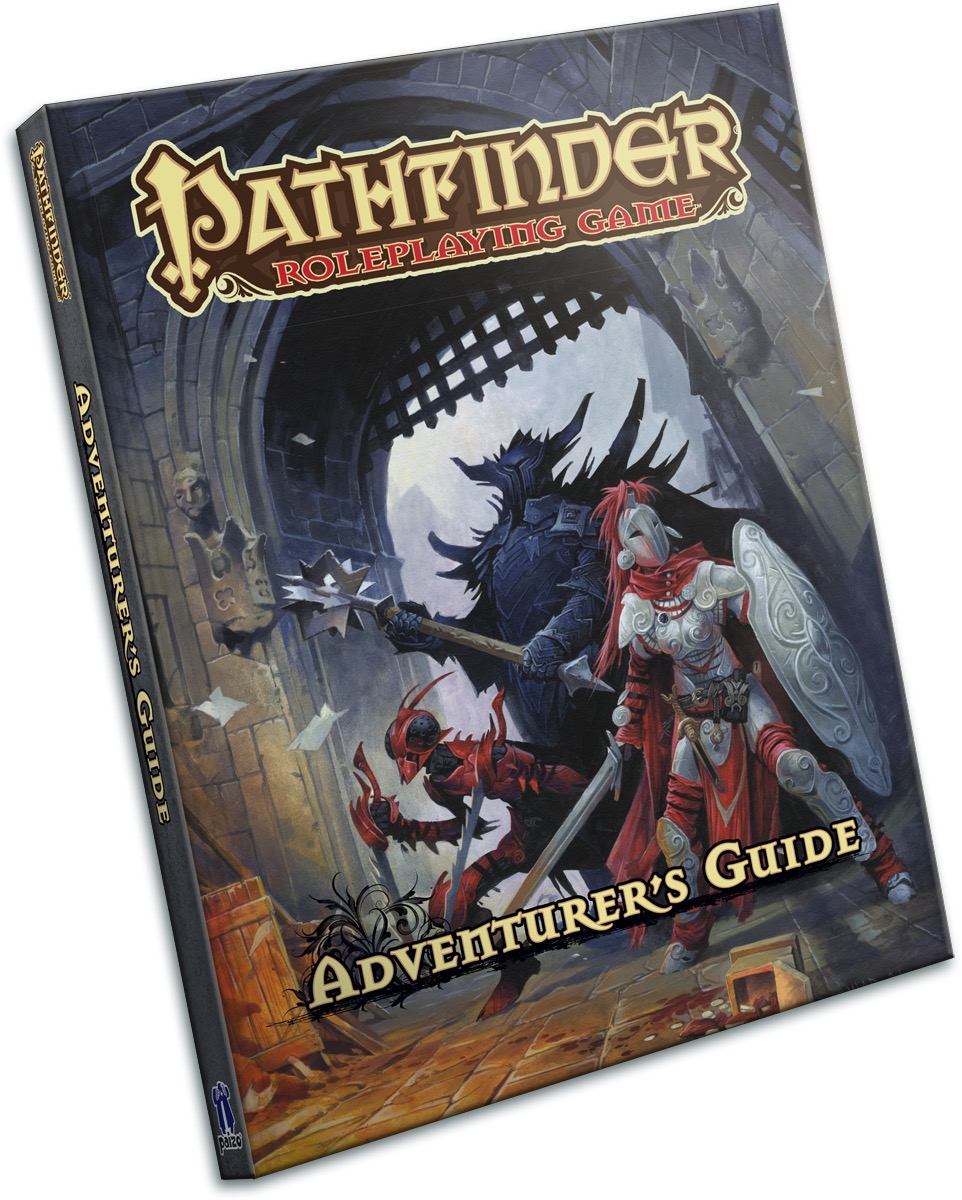 One of the best ways to make new mechanical game content stick out and be memorable is to attach it to creative flavour content. In a game like Pathfinder, which has a massive plethora of options published over numerous books, this has pretty much become a necessity. This is one of the principal reasons I adore Adventurer’s Guide so much.

When Adventurer’s Guide first came out last year, there was some controversy over the fact that it contains Golarion-specific content. Previously, most books published as part of the hardcover Pathfinder Roleplaying Game line have been setting-neutral (apart from a few minor things like the names and domains of gods). Golarion material was limited to the other Pathfinder lines like Pathfinder Campaign Setting and Pathfinder Player Companion. In this way, GMs could use Pathfinder Roleplaying Game books with any setting (whether Golarion, some other published setting, or one of their own creation) without having to make any adjustments.

However, more recent books from the year or so have started to contain more Golarion-specific content. Occult Adventures contains references to the multiverse structure used in Golarion products rather than a more generic planar structure like that used in the earlier GameMastery Guide. Adventurer’s Guide goes even further, presenting eighteen organisations all taken from the Golarion setting. The book is pretty much tied completely to the setting.

Many people, particularly those who don’t use the Golarion setting, were not happy with this change. They felt the book should have been published as part of the Pathfinder Campaign Setting line (which has had several hardcovers published for it, including The Inner Sea World Guide, Inner Sea Gods, and Inner Sea Races). While I do understand why people might feel this way, personally, I like the change. I fully admit to a certain amount of bias here as I use the Golarion setting for my own games, and I’ve always preferred setting content over generic rules options. But I also fully believe the best mechanical content is generally that which is also attached to flavourful content. It isn’t strictly necessary to attach it to a setting to make something flavourful—Occult Adventures, as an example, certainly provides a lot of flavourful content that is not tied to a specific setting—but a setting can help provide a framework for that flavour.

I think this is particularly true for organisations, which Adventurer’s Guide focuses on. Even “generic” organisations need a certain amount of detail about how they work and how they are structured, which makes them not truly generic. They may not be attached to a particular setting, but GMs adding them to a setting will still need to make a few minor adjustments—if only to decide where the organisations fit in their worlds. Likewise, if GMs want to use the organisations from Adventurer’s Guide with settings other than Golarion, this is generally a fairly easy task that, in most cases, doesn’t involve much more than changing a few names. Indeed, the rules indices at the end of the book even contain suggested generic names to help make the transition from Golarion to another setting simpler. For example, freedom irrigator is the suggested replacement name for the Bellflower irrigator archetype, and Nomad-Trained Horse for the Al-Zabriti-Trained Horse feat.

Like most Pathfinder Roleplaying Game hardcovers, the majority of Adventurer’s Guide contains new options such as archetypes, prestige classes, feats, and spells. Each chapter focuses on one of the eighteen organisations. The first two pages give basic background information about the organisation along with brief details of three prominent NPCs from that organisation. The background information gives just enough detail to get a feel for the organisation without getting into a lot of specifics (making it even easier to use settings other than Golarion). Each chapter then presents at least one prestige class and generally at least two archetypes, though some organisations get more of either or both of these (the Eagle Knights have four prestige classes, for example). The remainder of each chapter includes various other things specific to its respective organisation, such as equipment, new feats, new spells, and so on.

Adventurer’s Guide does contain some material that has appeared in previous books, and some organisations contain more repeat material than others (such as the Pathfinder Society, for which all three prestige classes originally come from Seekers of Secrets, though they have been updated here). However, every organisation does have at least some completely new material (such as the name-keeper, a shaman archetype for the Pathfinder Society). Overall, the majority of the material in the book is new.

A couple of the organisations themselves are effectively new. By this, I mean that they might have been mentioned in passing in some previous books, but until Adventurer’s Guide, there has been very little, if any, information about them. That means that pretty much everything in these chapters is brand new. One such organisation is the Rivethun, a society of dwarven animists. Another, the Al-Zabriti have a couple pages devoted to them in Qadira, Jewel of the East, but all the material here is completely new. Indeed, the Al-Zabriti chapter works well as a companion to Qadira, Jewel of the East.

Of course, GMs may be curious how to make all the new options in this book available to player characters since they’re associated with a variety of different organisations. The book’s introduction provides three options: full access, limited access, and affiliation access. With full access, PCs can select and use any of the options in the book without consideration of the organisation the abilities are associated with. This one is useful for GMs and players who want to make use of the abilities without having to include the organisations in their games. With limited access, PCs must be members of the organisation in question in order to select any abilities associated with it. Affiliation access is part way between the other two (although closer to limited than to full). With affiliation access, PCs need to be affiliated with the organisation to select its options, although they do not necessarily need to be full members. This is my own preferred approach, although I think it’s a good thing that the book explicitly gives GMs different options. Of course, even with limited access, that doesn’t mean that PCs can’t discover various things in play, and the book wisely points this out. There’s nothing to stop a PC wizard from learning a Cyphermage spell from a capture spellbook, for example, regardless of whether the PC is a Cyphermage or not. Also, some options in the book are explicitly labelled as “unaffiliated”, meaning that while they are associated with organisation they are presented with, PCs do not need to be affiliated with that organisation in order to learn it, even when the GM is using limited or affiliation access.

While affiliation access may be my own preferred approach, I’m not that fond of the rules the introduction presents for determining how many organisations a PC can be affiliated with. Every PC can be affiliated with a maximum number of organisations equal to their Charisma modifier + 1 (minimum 1). They can take the Additional Affiliations feat to increase this amount by 2. Each PC can start the game affiliated to one organisation and any additional ones must be added during play. Personally, I don’t like putting a hard maximum on the number of affiliations. If events during play would result in affiliation or membership with a particular organisation, PCs shouldn’t be prevented from joining just because they are already affiliated with another organisation (although in-game details like rivalry between the organisations might prevent the PC from belonging to both). And the book agrees with me! It explicitly states that GMs should allow PCs to have extra affiliations if it makes sense with game events—which pretty much makes having a maximum and an Additional Affiliations feat pointless. I think it would make much more sense (and be simpler) to just say that PCs can start with one affiliation if the player wishes and any additional affiliations should be acquired during play.

But that’s only one tiny part of the book (less than two pages total). The rest of the book is simply great. While there are certainly some things that stand out to me more than others, pretty much everything is heavily informed by the organisation it belongs to, and that means pretty much everything oozes with flavour. I came away from just about every chapter with a desire to make a campaign centred around that organisation. About the only exception would be the Gray Maidens and that’s only because I’m currently running Curse of the Crimson Throne, and thus, I’m already doing a campaign centred around them! Even organisations I’ve been less enamoured with in the past, such as the Pathfinder Society, still left me pondering ideas. This is a very good thing, in my opinion.

These days, it can take a lot for a book focused on new feats, spells, etc. to impress me. I’ve reached a saturation point. There are so many options now that I can’t keep track of them all, and most new ones get forgotten soon after I read them. Adventurer’s Guide is one of the few books that stays in my mind and keeps pulling me back to it. I can’t recommend it enough!
Posted by Michael Ray Johnson at 23:49