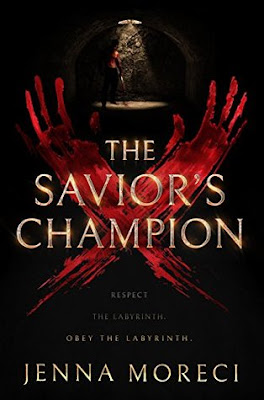 Reading has always been an important part of my life. I do a lot of reading, but recently, most of that has been either roleplaying books or non-fiction. Last month, I realised that it had been over a year since I’d read a novel. Clearly, that needed rectifying. But first, I needed to choose something to read. I own a huge pile of books that have been waiting to be read for years, but I decided to skip all those and go for something completely new. My attention turned almost immediately to The Savior’s Champion, mainly because I’ve watched a lot of author Jenna Moreci’s YouTube videos and I was aware of its recent release.

I’d read a number of reviews of the book, most of them gushing with praise, so I figured it was a safe bet. However, despite the positive reviews, I didn’t expect to love the book as much, just like it. Too often, I’ve encountered things that don’t turn out to be as good as the hype. Also, I can be very critical of my entertainment, even the things I love (just read my Doctor Who reviews for examples of that).

Well, I was wrong. I absolutely loved this book. It very quickly became one of those books that I just couldn’t put down (except I had to because I had to go to work or do other boring things like that). It may have been over a year since I last read a novel, but it has been even longer since one had me so enthralled beginning to end.

The Savior’s Champion follows the story of Tobias, a young man who enters The Savior’s Tournament, which is a competition to win the hand of The Savior, a semi-divine being who rules the land the novel takes place in. By tradition, whenever the current Savior comes of age, the Sovereign (the one who won the previous tournament) launches the tournament to find the man who is most worthy of marrying The Savior. The 30-day event involves mostly violent contests and the winner is whoever is the last one standing at the end.

Tobias doesn’t really want to enter the Tournament. He has no desire to marry The Savior, but his sister was disabled in an accident a few years ago and his family cannot afford the cost of her care. Tobias already had to give up an apprenticeship with one of the land’s most renowned artists to toil long hours to raise money for his sister’s medicine. The families of entrants in the Tournament receive a large payment of money, so Tobias decides to enter so that his sister can receive the care she needs.

During the Tournament, amidst all the violence and death, Tobias meets Leila, one of the members of The Savior’s court and finds himself falling in love with her. But of course, she is not the one he is supposed to be in love with, and that only makes his situation even more precarious than it already was.

The Savior’s Champion is a fantasy novel. There is magic and a lot of violence, some of it quite graphic. But it’s also a romance, and while the violence of the Tournament forms the backdrop, the book very much focuses on the developing relationship between Tobias and Leila, and it does so in a very engaging way that is both fun and dramatic.

The male hero winning the girl at the end of a story is a trope that has been part of all fiction for far too long. The man gets to achieve great things while the woman is little more than an object to be acquired as proof of the hero’s masculinity. But The Savior’s Champion takes this trope, twists it round, and exposes everything that is wrong with it, while at the same time, showing how things should be done by providing a romance that is both fully consensual and has nothing to do with winning someone.

The Tournament itself is a manifestation of this trope. It is a contest in which only men compete and the prize is literally a woman. Yet over the course of the book, the Tournament is very clearly shown to be a barbaric practice, one that many people (including Leila) would like to see abolished. The female characters are also shown to have agency despite the lower status their society places them in.

There are a lot of characters in The Savior’s Champion. For a start, Tobias is just one of twenty competitors in the Tournament. On top of the that, there are all the people of The Savior’s court, Tobias’s family, and others. As such, it is occasionally difficult to keep track of all of them, but for the most part, the characters have distinct personalities and traits that make them easily distinguishable even if you don’t always remember their names.

The only thing that really gave me any trouble distinguishing the characters was occasionally with the competitors’ “laurels”. All competitors in the Tournament are given a laurel, which is a name that the audience can refer to them by. Tobias is the Artist, and some of the other laurels include the Dragon, the Shepherd, the Dog, and the Prince. Once Tobias learns people’s names, he makes a point of thinking about and calling them by their real names, thus meaning that in the narrative (which is entirely from Tobias’s point of view), the characters’ real names are used more frequently than their laurels. However, in the dialogue, other characters quite frequently use the laurels, and this makes perfect sense for those characters and for the story. However, it did lead to a few moments where I thought things like, “Wait, who’s the Hunter again?” after which, I’d have to look back a bit to find the answer.

The large cast allows for a great diversity of character types. The competitors are not all violent brutes (though some are). They range from said brutes to spoiled nobles to good, honest men. The Savior’s court also includes a wide variety of personalities, and all the characters come from a diverse group of races and sexualities.

One common criticism I’ve seen in other reviews (even the gushing ones) is that Tobias himself is not a particularly interesting character and can take some time to warm up to. I disagree with that assessment. I found Tobias an immediately engaging character that I could easily empathise with. Leila is also a great character and I absolutely love the romance between the two. Like many romances in books, movies, and other fiction, it progresses pretty fast (the Tournament is only 30 days long, after all), but I never found the speed to be unbelievable. It progresses in a very natural manner and the speed seems more due to the stress of the Tournament (in Tobias’s case) and court life (in Leila’s) pushing things along.

As much as I like Tobias and Leila, my favourite character is by far Delphi, who, like Leila, is one of The Savior’s “sisters” (not blood relatives, but women raised from childhood with The Savior). She’s tons of fun, and I’d love to read a book from her perspective one day.

If I had one complaint about the book, though, it would be the ending. I won’t give away any spoilers, but it just sort of...stops. I didn’t even realise I’d reached the end at first. I knew I was getting close, but I have a Kindle copy, so I didn’t have a thinning number of pages to provide me warning. I reached what seemed to be the ending of a chapter, and based on the way things were happening, I expected one more chapter, possibly a short one. So I swiped to turn the page and a screen asking me whether I wanted to rate the book on Amazon (where I bought it from) came up. I still didn’t realise I was at the end. I just thought I had accidentally tapped the wrong part of the screen or something. So I tapped “return to book” and it took me back to the page I had just finished reading. I swiped to turn the page again and ended up with the same rating screen. Only then did I even consider the possibility that the book was done.

I knew going into it that The Savior’s Champion is the first in a series. The second book, The Savior’s Sister takes place at the same time as the first, but tells the story from Leila’s point of view (and I’m really looking forward to getting more insight into the Savior’s court through this) and then the third book, I presume, will pick up where the first two end. However, even knowing this, I still expected a bit more of a resolution than the book actually gave me.

That said, this didn’t really affect my overall enjoyment of the book (apart maybe from leaving me with the paranoid worry that I somehow got a defective copy of the book which is missing the last chapter). It has actually succeeded in getting me hugely excited for not just the second book, but also the third! The fact is, The Savior’s Champion is a phenomenal book that I happily recommend to everyone. I should warn that there is graphic violence in the book (a lot of characters die), along with quite a bit of swearing and harsh language, as well as some sex. But as long as those things don’t bother you, you should read it. It really is that good.
Posted by Michael Ray Johnson at 00:45