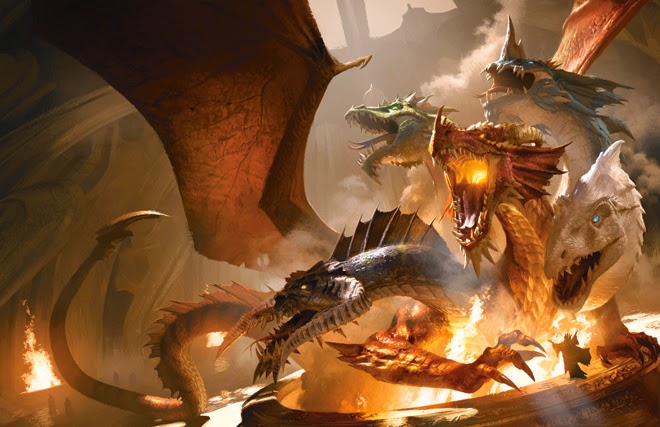 In my May Round-Up, I noted that the new edition of Dungeons & Dragons finally had release dates, starting with the Starter Set in July. That set is already available at select stores and will be in wide release on July 15. What I didn’t know at the time, though, was that Wizards of the Coast would also be releasing a free pdf of the game’s basic rules (you can download it here). Although I stated that I wouldn’t be switching to the new game (I’d be staying with Pathfinder), I did say that I might pick up the rules at some point. Well, with a price point of free, there really wasn’t any reason not to. So I downloaded them.

I haven’t changed my mind about sticking with Pathfinder, and my reasons are the same as I stated before. However, I will say that I like what I see in the new D&D, and if this had been 4th Edition, I might have stuck with the game at the time. One of the things that turned me away from 4th Edition was the radical departure from so many of the things that made D&D identifiable uniquely as Dungeons & Dragons. After downloading the D&D Basic Rules, I first skimmed quickly through the book just to get an overall feel of how it looked, and right away, I could see things that looked like D&D. It was a good first sign, and it held up upon reading thoroughly.


Now, I should point out that these are not the full rules of the game. The free pdf covers player information only (so far, at any rate). There is no Dungeon Master information, nor are there any monsters in this book. WotC will apparently be adding to this pdf over the coming months, and presumably some DM and monster information will make their way into it, but for now, this pdf lets you create a character and gives you an overview of how to play, but you can’t actually play the game right “out of the box” as it were. Also, the D&D Basic Rules are not the same as the D&D Starter Set. I don’t have that set and am not fully familiar with it, but I do know that it has some DM and monster information, along with an introductory adventure.

The D&D Basic Rules also provide only a limited number of character options. There are only four classes detailed (cleric, fighter, rogue, and wizard), for example. All the classes have ways of customizing them (domains for clerics, martial archetypes for fighters, roguish archetypes for rogues, and arcane traditions for wizards), but only one of these customization options is presented for each class (the life domain for clerics, champion archetype for fighters, thief archetype for rogues, and evocation tradition for wizards), with a reference to see the Player’s Handbook for other options. Similarly, only a limited number of racial options are offered. I don’t see this as a problem. You can make a functional character with the rules presented here, and having them available for free gives people the opportunity to evaluate the game before spending a lot of money on it to get all the other options.

Indeed, one of the things that impresses me most about the D&D Basic Rules is the stark simplicity of the game. The designers have taken the core elements of the game and whittled them down to something elegantly straight-forward, akin in many ways to the old Dungeons & Dragons Rules Cyclopedia (in my opinion, a book that is too often forgotten about in the history of D&D). You can take a character all the way from 1st to 20th level with these rules, but not be bogged down by the math of endless bonuses from different sources. For the first time since the earliest editions, the game has also separated itself from grid-combat and miniatures. You can still use a grid if you want, but it’s not a necessity. It makes me nostalgic for my childhood when we never needed battle mats, miniatures, erasable markers, and so on. Of course, simplicity does bring with it a correlating lack of options, and as books like the Player’s Handbook and further supplements down the line add more options to the game, the simplicity might well be lost, but for now, at least, this is a very easy-to-play and easy-to-understand game.

One of the design goals of this edition of D&D was to have it appeal to fans of all previous editions. It’s hard to say how successful they were with this, but it is possible to see the influences each edition had on this one. One influence from 4th Edition is a unified progression for all classes. Every character, regardless of class, gains a proficiency bonus that progresses at the same rate. This proficiency bonus is applied to attack rolls, saving throws, skill checks, and anything else, provided your character is proficient in that particular thing (your character’s background and class determine the things he or she is proficient in). If your character is not proficient, you simply make the check without the proficiency bonus. To be honest, this is an aspect of the game I’m not fond of. I like having characters who progress at different rates—characters who can be really good at some things, mediocre at some others, really bad at yet others, and anything in between. This unified proficiency bonus progression creates just two levels of ability at everything. No character is ever really bad at anything or even mediocre. They’re either good at something or very good at something. That said, I understand why the game was designed in this way. The unified progression is one of the major contributors to that stark simplicity I was praising earlier. There’s no doubt that it’s a very easy-to-use system.

More than that, the proficiency bonus is one the very few bonuses that you have to apply to rolls in this game. There are other effects that give you a bonus to your rolls (most notably your ability score bonuses), but generally, you never have to apply more than a small number of bonuses to the same roll. This keeps the math simple and means that you don’t have to remember a long list of bonuses to add on to each roll (a list that, in games like 3rd Edition and Pathfinder, can sometimes change from one round to the next). But how then does the game account for the numerous ways circumstances, environment, or magic can give characters an edge or hinder them? The game does this with a rather brilliant mechanic. Some situations give a character “advantage”. When your character has advantage, you roll two d20s and use the higher roll. Other situations can give your character “disadvantage”. In these situations, you roll two d20s and take the lower roll. It’s a very simple way to keep the math to a minimum. For people who find math easy, this doesn’t really make much of a difference, but those who have more difficulty with math will likely find this a great benefit of the game and it will help to keep things moving.

Magic has returned to something of the “Vancian” style of earlier editions, although the 4th Edition concept of rituals has been retained. Wizards and clerics prepare spells like in those early editions (called memorization in 1st and 2nd Edition), but once spells are prepared, casting one does not remove it from the list of prepared spells. Wizards and clerics may cast their prepared spells in any combination up to their limit per day. It’s an interesting mix of the 3rd Edition concepts of spontaneous and prepared casters. One interesting change to the spells themselves is that, instead of spells scaling by the caster level, they scale by casting them as higher-level spells. For example, magic missile (a 1st-level spell) gives you three missiles, but using a higher-level spell slot (such as a second- or third-level slot) gives you additional missiles. In earlier editions, the number of missiles would simply go up automatically based on your caster level. This creates the interesting effect of toning down the power level of spellcasters, which have had a notorious reputation in earlier editions of becoming extremely powerful at high levels. On top of this, clerics and wizards receive only a very few high-level spells slots (no more than one of 8th- and 9th-level, and no more than two of 6th and 7th). This serves to make high-level spells a more precious resource, which in turn makes them all the more spectacular when they are actually cast. I rather like this.

Of course, as I mentioned before, the simplicity of the system does come at the cost of a variety of options. The spell lists for clerics and wizards are quite small, limiting the variety of spellcasters you can create. No doubt the Player’s Handbook will include a larger selection of spells and future books will add more, but for now, there’s not a lot of variety.

The D&D Basic Rules pdf does make mention of some of the additional options that are in the Player’s Handbook, such as multiclassing and feats. There is a brief description of how each works—for example, any time your class provides you an ability score boost, you can instead select a feat—but the details (including mention of any specific feats) are left for the Player’s Handbook, and with good reason, I think. Feats and multiclassing can add a lot of complexity to the game. Making them optional additions allows players and DMs to keep the game simple if they wish.

5th Edition D&D (not actually called “5th Edition”, but I’m using it for simplicity of understanding) has made me very nostalgic for the early years of D&D, and this is perhaps one of its greatest successes. If it affects other people similarly, it will easily achieve its goal of appealing to fans of all editions. But that said, I’ll reiterate that I won’t be switching to it for my own personal fantasy games. I like what I see, but I have a lot invested in Pathfinder, and while I like the simplicity, I also want the variety of options present in Pathfinder (even if those options are starting to get a little overwhelming). But if time ever permits (a commodity I don’t have a lot of at the moment, but perhaps at some point in the future), I’ll happily join someone else’s 5th Edition D&D game to actually get a feel for it in play.
Posted by Michael Ray Johnson at 21:01