October Round-Up - A Great Month for Doctor Who! 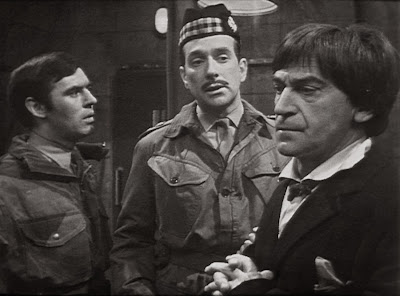 This was quite the month for Doctor Who fans! And there’s still nearly a month until the 50th anniversary. Build-up to the anniversary certainly has begun in earnest though. The month opened with further information on the anniversary simulcast. Specific information on the theatre venues came later in the month, although I didn’t specifically report on that. Tickets for the simulcast went on sale on October 25th, and I’m pretty sure they all sold out quite quickly. They certainly did in Toronto.

The tickets were scheduled to go on sale at 9 a.m. eastern time. I was ready and waiting to get mine. The option to purchase tickets for the Toronto location (Scotiabank Theatre) didn’t go live until nearly quarter past nine. I immediately clicked to purchase and went through the whole process, confirmed all my information for payment, and so on. Then I got the following message: “We cannot finalize your payment due to a technical error. Please try again later.” I tried again immediately, only to find that the tickets were sold out. I was very unimpressed. Oh well. I purchased tickets for November 25th instead and encountered the same problem a couple more times before I decided to try a different payment option. That finally worked, so hooray! I hope the 3D doesn’t give me too much of a headache.

The first trailer for the 50th anniversary episode (not including the Comic-Con trailer from several months ago) was released this month. It was specially recorded and does not contain any actual scenes from the episode. Instead, it’s a bit of a tribute to the full 50 years of Doctor Who history, with a narration by Matt Smith to whet viewers’ appetites for the special. Visually, it’s really quite stunning, and if you look carefully, you can see a lot of images from across Doctor Who’s history, both the classic series and the new. Apart from being a nostalgia-fest, however, there’s not much of what one could actually consider content in it, but it is just a trailer. I do wish, though, that Doctor Who would lighten up on the superlative adjectives for a while. “One impossible day”, “the Impossible Girl”, “the Doctor’s darkest hour”—lines like these show up not just in trailers, but in the programme itself, and after a while, they start to lose their meaning. When impossible things keep happening, they’re just not impossible anymore. At any rate, here’s the trailer:

The 50th anniversary, however, was not the biggest news of the month. That honour definitely goes to the recovery of missing episodes! Nine previously missing Doctor Who episodes from the sixties have been discovered and are now available for download purchase. I wrote a review of one of the newly recovered stories, “The Enemy of the World”, something I never imagined I’d get to do a couple years ago when I started this blog. I’ve not actually had a chance to watch “The Web of Fear” yet, but I’ll hopefully get to it soon. Expect a review of it shortly after.

I also continued my own reflections on the impact of Doctor Who on my own life, looking at the sixth, seventh, eighth, and ninth Doctors. The last couple were published a bit late (I’ve been trying to work to a schedule of one each weekend), but I hope to be back on schedule with the tenth Doctor this weekend.

In other Doctor Who news, the TARDIS in Orbit project has another update:

With the heavy emphasis on Doctor Who this month, one might start to think this is a Doctor Who blog, but it’s really quite a bit more than that! There were only three non-Doctor Who posts this month, all of them Pathfinder. With my reviews of Mythic Realms, Mythic Origins, and Sword of Valor, I finally got caught up on Pathfinder reviews. When I posted the review of Sword of Valor, I had not yet received any new products. Of course, that’s changed in the last couple of days, so expect some more Pathfinder reviews soon.

Since November is the 50th anniversary month, there will likely be lots more Doctor Who stuff to come this month (including my remaining reflection posts on the tenth and eleventh Doctors, as well as one on the spin-off series), but I’ll be looking at other stuff too. A new season of Wizards Vs Aliens began this week, so I’ll be reviewing that. Plus, I have a couple of other things I hope to get to as well.

Happy Hallowe'en, everyone, and have a great November!
Posted by Michael Ray Johnson at 22:41