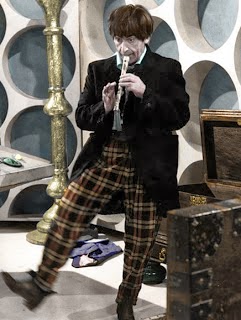 Recently, I’ve been writing a series of reflections on my life with Doctor Who. It’s all part of my way of celebrating fifty years of my favourite show. Back in my reflections on the first Doctor, I mentioned how much I long for the missing episodes (of which, until recently, there have still been 106) to be found and returned. There are so many stories I and other fans desperately wish to enjoy. In that same article, I mentioned rumours of the discovery of a large haul of missing episodes and the hope that some aspect of that rumour might turn out to be true.

Well, it seems that dream has really happened. On the weekend, stories began to break in the British media about a find. In particular, Radio Times published a story stating that missing episodes would be available for download on Wednesday (later updated to say later in the week). Earlier today (well, yesterday now in the U.K.), BBC news published a story stating that "a number of early episodes...have been returned to the BBC," and that full details are expected to be available at the end of the week. The official website of Deborah Watling (who played 60s companion Victoria) has also confirmed the news by announcing that she and Frazer Hines (60s companion Jamie) will be at the press conference on Thursday where the find will be officially announced.

This is real. This is truly real, and I couldn’t be more overjoyed.

I haven’t written much about the rumours leading up to this point since, well, they’ve just been rumours and this isn’t a gossip blog. However, I have been closely following the rumour since May (although it’s been around considerably longer than that). I actually don’t usually pay any attention to rumours like this, preferring to let news come as it may. But this rumour was a little different, and utterly absurd. It caught my interest and so I paid attention. According to the rumour (dubbed by some fans as the “omni-rumour”), a haul of approximately 90 episodes of Doctor Who, along with missing episodes of other programmes had been found. It seemed too good to be true. But then Ian Levine (who found and recovered 20 episodes of Doctor Who in the 80’s) began tweeting his belief in the rumour and suddenly there was just a hint of credence to it. Then he fell uncharacteristically silent on the matter, refusing to comment on it for months before finally breaking his silence a week or so ago. My own willingness to believe these rumours has waxed and waned over the past few months, but I have always remained cautiously sceptical. There have been hoaxes before, although if this were a hoax, it would be a massive one. However, a couple of weeks ago, things began falling into place in such a way that I became near certain there was some truth to it all. Of course, even true rumours have some exaggerations or outright fabrications to them, but I started to become confident that the core of this rumour, at the very least, was true, and that some episodes had indeed been found.

At any rate, although we don’t know for sure what episodes and/or stories will be announced on Thursday, it seems likely that it will be nine episodes (note this is only rumour, even though I’m reasonably confident in it): five episodes of the Patrick Troughton story, “The Enemy of the World”, and four episodes of the immediately following story, “The Web of Fear”, featuring the Great Intelligence (the villain from the recent stories, “The Snowmen” and “The Name of the Doctor”). When combined with already existing episodes, these episodes will complete “The Enemy of the World” and leave “The Web of Fear” with only one episode still missing. As for the other 81 episodes in that supposed haul of 90? Well, I think we should just wait and see what happens on Thursday before jumping to any conclusions. Nine episodes is pretty amazing, really.

Whatever the exact episodes found are, even only one or two episodes, this will still be worthy of celebration. Every missing episode found is a triumph. We certainly couldn’t have asked for a better 50th anniversary gift!

Posted by Michael Ray Johnson at 23:29

Email ThisBlogThis!Share to TwitterShare to FacebookShare to Pinterest
Labels: Doctor Who, Doctor Who 50th