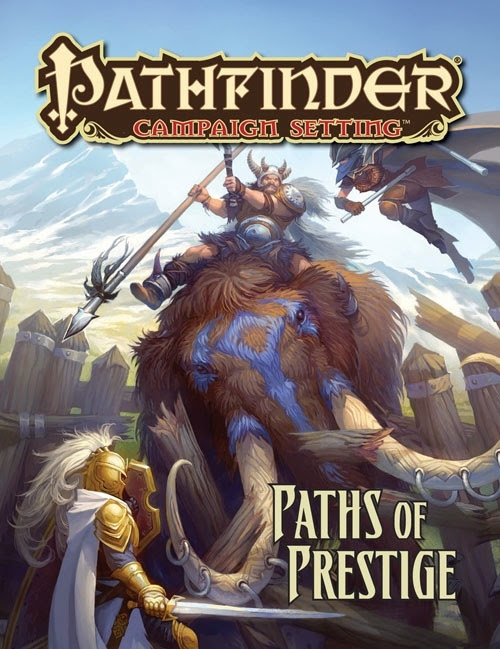 During the lifespan of 3rd Edition Dungeons & Dragons, the game was inundated with swarms upon swarms of prestige classes. While the initial concept of prestige classes was innovative and made a great addition to the game, the sheer number that eventually became available lessened their very “prestige”. Many became extremely generic, while others filled such obscure niches that it was unlikely anyone would ever want to play one. Worst of all, many of them just became more powerful versions of the core classes, granting new, powerful abilities while at the same time continuing to grant all the abilities of the core class they were best suited for (spellcasting prestige classes fell frequently into this trap). As a result, many gamers (myself included) began to tire of them and, ultimately, ignore them.

With Pathfinder, Paizo has steered clear of the prestige class “bloat”, taking the stance that prestige classes should be tied specifically to a campaign setting and represent unique abilities of organizations and factions within that campaign world. As such, the rulebook line has presented very few prestige classes (only the Core Rulebook and the Advanced Player’s Guide have any), focusing instead on archetypes that can fit any setting. Golarion-specific products in the Campaign Setting, Player’s Companion, or Adventure Path lines have presented occasional prestige classes when appropriate to help flesh out the world, but the number has remained relatively small. With Pathfinder Campaign Setting: Paths of Prestige, Paizo has produced its first full book of prestige classes, thirty of them in total, all of them brand new for the world of Golarion.


If this book had come out during the time of 3.5, I probably would have groaned and ignored it. Over the years, I have had very few players ever take a prestige class (I’m pretty sure I could count the total number on one hand), and so this just would have been more bloat that would probably never get used. However, with recent emphasis being away from prestige classes, my reaction to this was one of interest. The scattered prestige classes that have appeared in other Golarion sources have all been very flavourful, so there was every reason to believe Paizo could keep it up with a book full of them. To be honest, most of the classes in this book will still likely never see use in any of my games; however, I would consider it very likely that some will get used, if only for NPCs. With only a couple of exceptions (that seem strangely generic), all the classes are extremely flavourful and help to add more options and life to the world of Golarion.

There’s a great deal of variety in Paths of Prestige. The various classes offer options for all kinds of characters, from duelling fighters (Aldori swordlord) to plane-hopping spellcasters (riftwardens) to gunslingers (shieldmarshal). There’s even a prestige class specifically geared at multi-class paladin/monks (champion of Irori). Thirty prestige classes is actually quite a lot, and there’s a danger of some of them starting to feel repetitive (a common problem with 3rd Edition prestige classes); however, that’s certainly not the case here. Each class has something new to offer, many of them filling in aspects of the world that have not been greatly detailed or only hinted at before. They show not just diversity in special abilities and skills, but also in the organizations and cultures they represent, from the prophet of Kalistrade to the Magaambyan arcanist to the Hellknight signifer (the spellcasting branch of the Hellknight order). There’s something from just about every region of the Inner Sea area of Golarion.

Only two classes stand out to me as being in any way problematic—not because of mechanical problems, but rather because they seem strangely generic in a tome that is otherwise full of classes tied to very specific organizations or faiths. These two classes are the noble scion and the pit fighter. Neither class is tied to any specific aspect of Golarion, other than a very broad tie to nobility (in the case of the noble scion) or to gladiators (in the case of the pit fighter). Both classes could pretty much show up anywhere in the Inner Sea, regardless of political affiliation, religion, race, or nationality. They seem out of place and don’t quite fit the philosophy that prestige classes should be tied to specific groups. Not only that, they both seem unnecessary as classes at all. I suppose I can see some value in a class tied to gladiatorial style fighting (although an archetype seems better suited for this), but a special class just for nobility doesn’t really achieve anything in my eyes. Being a noble is a background and social trait, not something that bestows special skills. People can rise to nobility, certainly, but I don’t see that bringing a whole class with it. The aristocrat is an NPC class for a reason. It’s to flesh out those nobles who don’t have a PC class. PC nobles can just be fighters, wizards, monks, etc. They don’t need anything else, and I don’t feel the noble scion adds anything to the world.

From a mechanical perspective, the classes all look reasonably balanced. I haven’t tested them all, obviously, but nothing stands out as particularly over- or underpowered. The winter witch has a few issues with clarity in the write-ups of its abilities (in fact, serious enough issues that Paizo has released a free winter witch errata pdf, which can be downloaded from their website, to fix the problem), but overall the classes look mechanically sound and very playable. I particularly like the veiled illusionist, and I already have a few ideas for a new NPC...

Overall, Paths of Prestige is a good book, one I feel even people still tired of the prestige class bloat of 3rd Edition will like and find usable. It adds some great variety for both PCs and NPCs alike in any campaign set in Golarion.
Posted by Michael Ray Johnson at 00:10