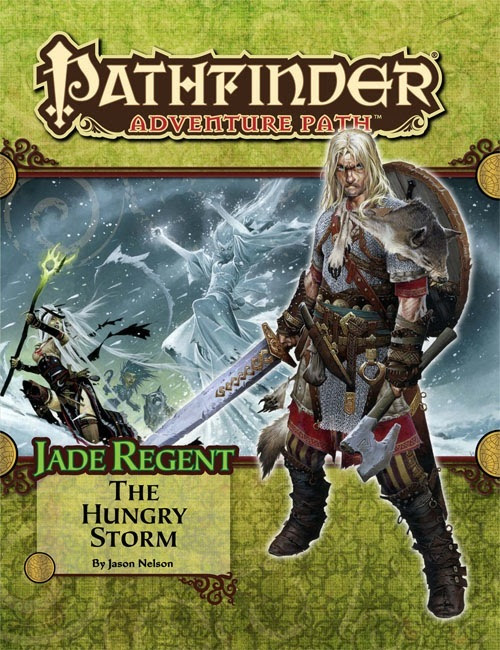 In every adventure path, there always seems to be at least one volume that doesn’t live up to the quality of the others. For Jade Regent, that volume is The Hungry Storm. It’s a shame because this was one I was particularly looking forward to (I’ve always liked adventures set in the far north and I was particularly eager to see its treatment of the Erutaki, Golarion’s version of the Inuit). There are a lot of good ideas in it, and it’s the first one so far to make heavy use of the caravan, around which the adventure path is supposed to centre. However, those ideas are either not given enough depth or they just don’t string together well. The Hungry Storm is not a bad adventure—I’ve certainly seen far worse ones out there—but it’s not particularly great either. It’s somewhat mediocre overall, and when compared with the two excellent opening volumes, mediocre really stands out. That said, I do believe that in the hands of a competent GM, this adventure can still be a lot of fun for the players, who may not even notice its shortcomings.

The biggest difficulty The Hungry Storm has to deal with is the fact that it is a journey-from-point-A-to-point-B adventure. I both love and loathe these kinds of adventures. I love them because I like seeing the characters outside their home turf and how they react to situations there (and this, when it comes down to it, is the basis of the entire Jade Regent Adventure Path). I loathe them because it’s very difficult to string a coherent narrative across them since the PCs can easily wander quite far afield. Indeed, sometimes it’s better to not bother with a narrative at all and just let the PCs explore. However, to do that in a published adventure just results in a clone of The Isle of Dread transplanted to a different climate. That sort of thing has been done a hundred times before and doesn’t really need to be done again. So The Hungry Storm tries to include a central narrative. As a whole, Jade Regent has been doing quite well stringing out a coherent narrative over what is essentially a journey-from-point-A-to-point-B campaign. Unfortunately, The Hungry Storm on its own doesn’t manage this nearly as well.


My principal problem with the plot of the adventure comes from its complete change part way through. The main villain, the half-fiend sylph Katiyana, is required to die and then come back as a ghost, after which she seeks revenge on the party. Admittedly, her death is a pretty likely outcome. Few parties are likely to leave her alive, and even if they do, the destruction of the storm sphere (necessary to stop the morozkos, the hungry storms of the title) also kills her. Of course, some crafty parties might find a way of keeping her alive, or slightly more likely, preventing her return as a ghost and thus derailing the remainder of the adventure entirely, but that’s not really a big issue. Any adventure can be derailed by a crafty enough party, and a good GM will go along with it. The real problem is that the remainder of the adventure after Katiyana’s death is just not as interesting as the beginning, and manages to turn a wilderness trek into yet another dungeon crawl that has nothing unique about it. It could take place just about anywhere.

The first part of the adventure, centring around the Erutaki town of Iqaliat and Katiyana and Tunuak’s plans involving the dragon Vegsundvaag, is far more interesting. It provides the GM and players with a brief and, alas, too small insight into the Erutaki and life at the Crown of the World. For an adventure path centred around travelling through many different lands, I can’t help but feel this adventure missed out on a major opportunity to properly explore Erutaki culture, and the implications of the PCs (as outsiders) trying to operate within this culture. Instead, the adventure quickly abandons Iqaliat and becomes about killing yeti.

Even more disappointing, the background article on the Crown of the World barely mentions the Erutaki. It gives a decent geographic overview of the region, but when it comes to detailing the inhabitants, it only provides about a paragraph or so for each of a few settlements. The article doesn’t mention culture or lifestyle at all, so GMs are reliant on a few glossed-over references in the main adventure text. Unless the GM is an Inuit or does her own background research into real-world Inuit culture, she is left with presenting a two-dimensional, and likely stereotyped, culture to the players. Golarion products are usually better at presenting diverse cultures, so that adds a bit to the disappointment here.

On the plus side, this volume’s Bestiary presents several monsters taken directly from Inuit myths, and so somewhat oddly, the best look at Erutaki culture comes in the Bestiary. My personal favourite is the qallupilluk (based on the qallupilluit from Inuit myth), aquatic creatures that steal children, both to reduce their own loneliness and to lash out at surface-dwelling people. I am also happy to see that whenever The Hungry Storm refers to its real-world influences, it uses the term Inuit rather than eskimo. The latter is generally considered a pejorative term by most Inuit, and it shocks me how widespread its use still is despite this. I’m happy that Paizo has not fallen into this trap.

Overall, The Hungry Storm isn’t a bad adventure. It starts out well enough. I just feel it missed a great opportunity by turning the second half into a generic kill-the-monsters adventure instead of spending more time exploring the peoples and cultures of the land in which it’s set.
Posted by Michael Ray Johnson at 16:39