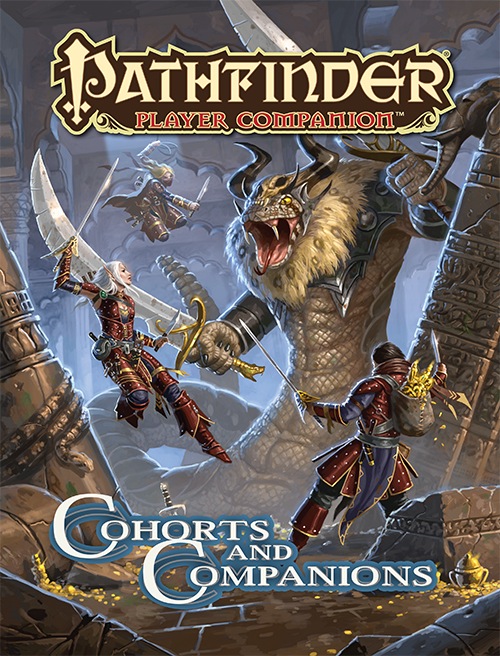 While conflict with villains and monsters is a significant part of any roleplaying game, the game would be considerably less interesting if the PCs didn’t have friends and allies as well. Whether they’re a local inn-keeper providing the PCs a room to sleep in or a loyal cohort who accompanies the PCs on their adventures, these friendly characters help fill out the rest of the world and provide variety beyond evil and/or monstrous opponents. Pathfinder Player Companion: Cohorts and Companions focuses on the followers and allies who aid the PCs in various ways throughout their adventuring careers.

As the book’s name implies, cohorts (gained from the Leadership feat) are a significant focus, but the book also goes considerably beyond these. The “Companions” part of the title can refer to animal companions, but also to pretty much any other person, animal, monster, or even object that in some way accompanies or aids the PCs—and there is quite an impressive breadth of options covered.

The book opens with a two-page discussion about why NPCs might follow PCs, and how PCs might go about gaining followers. This includes things like hiring NPCs as well as NPCs just following along for their own reasons. Naturally, there’s a fair amount of discussion about the Leadership feat, as well as mention of the variant Leadership feats that can be found in other products: Squire from Knights of the Inner Sea, Torchbearer from Dungeoneer’s Handbook, and Vile Leadership from Champions of Corruption. There is also a very good sidebar on “Who Controls Cohorts?” which discusses how to decide whether the GM or player (or a combination of both) gets to control cohorts’ actions.

The remaining chapters of the book are all two pages long, and each focuses on one type of follower, cohort, or companion. As is typical for a Player Companion book, these mostly contain new character options, such as feats, archetypes, spells, and so on. Every chapter also contains a sidebar with an expanded list of monstrous cohorts fitting the theme of the chapter. While I understand the desire to group things in themes, I would have preferred if these additional cohort options were all in one place. Feats, archetypes, and so on are also broken up this way, but they at least get an index at the front of the book to make finding them a little easier. To see all the monstrous cohort options, you have to flip through the book.

The various types of followers covered include chroniclers (people who write about the party’s exploits), beastly followers, undead, religious followers, and more. There is even a chapter on intelligent item cohorts. Indeed, I’m impressed by the sheer number of different kinds of companions represented. This includes the different ways to gain followers, from building constructs to binding extra-planar beings.

The types of character options presented are also quite varied. While a lot of them are feats or archetypes, there are also less common options, including two new mythic abilities (binding ritual and interplanar prestige). As well as these options, though, I really like that the book contains general rules for situations that don’t necessarily require a feat or class ability. These include rules for advancing item cohorts and rules for enthusiasts—essentially fans—who can be attracted through use of the Perform skill. I particularly like the rules for growing plant creatures (though this does require the Grow Plant Creature item creation feat introduced in the book). There are also new downtime options (using the downtime rules from Ultimate Campaign), rules for hiring contingency services (which work similarly to contacts, also from Ultimate Campaign), and rules for converting NPCs to your religion. Finally, there are guidelines and rules for parties who choose to create a charter for their group. These rules oddly reference a feat called Chartered Adventuring Company that does not appear to have a description anywhere that I can find. The lack of a reference to another book would indicate that it was intended to be in this book. Presumably, it was cut and the reference to it was missed. Whatever the case, the feat is not necessary for making a charter.

As tends to be the case whenever a large number of new character options are introduced, some are less interesting or memorable than others, and some even come across as rather pointless. For example, there are several teamwork feats for boosting bardic performances (Basic Harmony, Compelling Harmony, and Counterpoint to Inspiration). Like many teamwork feats, they provide benefits that are narrow in scope and very situational. Counterpoint to Inspiration is the only one that provides a benefit that could be regularly useful (it increases the morale or competence bonus granted by an ally’s bardic performance), but it has both of the other feats as prerequisites, making its cost to acquire not really worth it.

However, there are definitely some stand-outs. In addition to the ones I’ve already drawn attention to, there’s the construct rider alchemist archetype, which lets an alchemist create a construct mount. The bonded wizard archetype lets wizards expand what they can do with their bonded items.

Family traits are an intriguing new category of traits. Many of them work similarly to teamwork feats as they require another character to have the same trait; however, as traits only provide minor benefits anyway, the situational aspect of them doesn’t feel as limiting as teamwork feats. Betrayal of Trust is a family trait that is particularly unusual. It’s not selected in the usual way. Instead, it requires you to have the Tight Bonds trait with another character who also has the Tight Bonds trait. Then, at any point that you decide to betray the other character, you swap out Tight Bonds for Betrayal of Trust (you do not need to have actually done the betrayal yet). Considering that most NPCs don’t generally have traits, the person you are betraying is likely another PC, which could create some problems if not handled carefully. However, if your group is okay with intra-party conflict, this could allow for some very dramatic roleplaying opportunities.

I’ve mentioned in previous reviews (generally when talking about the variant Leadership feats) that I’ve always had a love-hate relationship with the Leadership feat (this book also has another variant, Recruits, which basically lets you get a number of apprentices whom you are instructing or overseeing). It’s a feat that requires some careful adjudication, but it’s also one that can add an interesting dynamic to the game. Overall, Cohorts and Companions does a good job expanding the options for cohorts without exacerbating the more difficult parts of Leadership (it’s already potentially one of the most powerful feats in the game). The best part of Cohorts and Companions, however, is that it provides so many non-Leadership-based options that increase the way PCs can gain allies. I’m often wary of Player Companion books these days (indeed, I ended my subscription to them quite some time ago and don’t have any of the ones from the last couple years) because they add so many options that just go unused and forgotten. However, I see potential for Cohorts and Companions to see more use than many do, which definitely makes the book worth having.
Posted by Michael Ray Johnson at 16:59