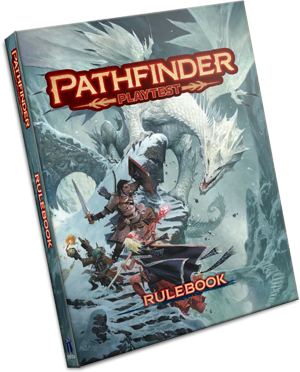 This is not a review. It doesn’t really seem appropriate to write a review of a work-in-progress. However, it does contain some of my thoughts about the game (which I suppose is review-like). Since I concentrate fairly heavy on Pathfinder products on Of Dice and Pen, I figured my readers may be just a little curious about my thoughts and why I won’t be talking much about 2nd Edition Pathfinder for the foreseeable future.

When 2nd Edition was announced, I was cautiously excited. I believe the game is due a new edition. I have commented in many of my reviews that it has grown to a size where it’s impossible to keep track of things. There are so many choices that the vast majority are never used. The game is also convoluted with overlapping, redundant options or even sometimes contradictory options. Pathfinder has been out for nearly ten years now (and will have been by the time 2nd Edition launches fully next year) and a lot of material has been published for it, so it’s not surprising that it’s become somewhat bloated. However, I also think Pathfinder is still a very playable game. It just needs a bit of consolidation and a few alterations and fixes here and there.

After the announcement of 2nd Edition, Paizo began releasing regular previews of the game on the Paizo Blog, and I followed along, eager to see what the game would be like. At first, I liked a lot of what I was seeing (the action economy system, for example, based on the one from Pathfinder Unchained, which I already use in my games). Unfortunately, it soon became clear that the changes were far more extensive than what I was looking for. This wasn’t so much a revision of the game as it was a complete rebuilding of it—more like the change from D&D 3.5 to 4th Edition D&D instead of 3.5 to Pathfinder, which is more along the lines of what I want. I have a lot of Pathfinder products that I haven’t had a chance to use yet—adventure paths I’d like to run, for example—and converting them to the new edition would be just too large a task that I don’t have the time for. 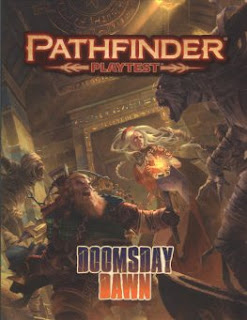 And while there are things in the new game that I like, there are also several things that just don’t appeal to me. “Resonance” is one such thing. This is a new mechanic for limiting magic item use and replaces things like magic item slots. Basically, every character has a number of Resonance Points and using or “investing” (for worn items) a magic item requires spending Resonance Points. If you run out of Resonance Points, it becomes more difficult to use a magic item and you need to make checks. The idea is that the character needs to use a little bit of their own innate magical talent to activate a magical item. My problem with Resonance is not on the mechanical side. For me, it changes the entire feel of the game. Pathfinder and D&D before it have always had some items that can be picked up by anyone and used. There is nothing necessarily wrong with a game or setting that requires expending innate ability to drink a potion, but that’s not Pathfinder to me. I changes the dynamic and that doesn’t appeal to me.

I will not be using the Playtest rules with any of my games. All my current games will keep with 1st Edition rules for the remainder of their campaigns. I will absolutely take a look at the final rules for 2nd Edition when they release next year, and depending on how they develop, I might consider using them for future campaigns. However, I suspect I will be remaining with 1st Edition. As I said, I’ve got lots of books waiting to be used—more than enough to last me for many years worth of gaming. There are also a whole pile of books left that I haven’t yet reviewed here, so I’ve got lots to keep me busy on here for quite some time too.

Please note that, while I don’t intend to switch to 2nd Edition at this time, I have nothing against Paizo for producing it or anyone who plans to make the change. As I said, I think the game is due a change. It just so happens that change has gone in a different direction to what I personally would have preferred.
Posted by Michael Ray Johnson at 14:40