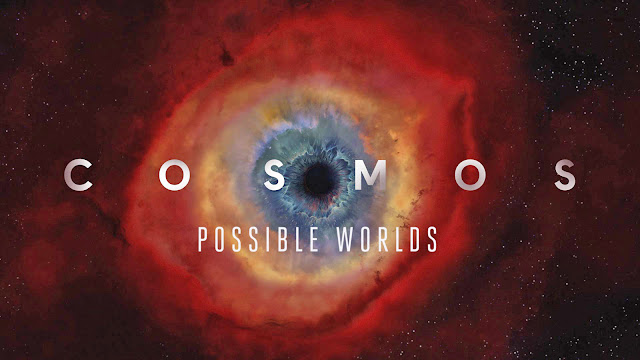 Long-time readers of this blog may recall my excitement four years ago when Cosmos: A Spacetime Odyssey premièred. Both an update and a sequel to Carl Sagan’s ground-breaking 1980 series Cosmos, Cosmos: A Spacetime Odyssey was hosted by Neil deGrasse Tyson and covered a variety of topics concerning humanity’s place in the universe, from the smallest atoms to the largest galaxies, and everything in between. It was both beautiful to watch and highly educational. It’s a series I strongly recommend for gaining a better understanding of science and the world around us.

It’s been a while, but the great news is, Cosmos is coming back for another season! Cosmos: Possible Worlds will air next year. I’ve known about this for some time now, but what I’ve only just learnt is that a new trailer came out last week. Have a watch!

Educational programming is important, and in many ways, science programming is especially so. Cosmos is far from the only science show out there (and there are many good ones, too), but it is one of the most high-profile, and that helps bring it to a larger number of people. We live in a time when science is more and more frequently coming under attack. In the United States, in particular, people in power try to place topics like climate change under the heading of “fake news” and push creationism as being on the same scientific level as evolution.

It’s not limited to the States, though. I live in Toronto, Ontario, Canada. Here in Ontario, we have recently elected a new conservative government that is already seeking to scrap environmental protections put in place by the last government and is fighting against the federal government’s attempts to keep those or similar environmental protections in place. This same provincial government is also scrapping a newly established sex education programme for Ontario students and replacing it with an out-of-date programme from 1998. And they’re doing this for reasons based entirely around misinformation (see here for a good overview of this situation).

As a teacher, I welcome any attempts to bring science and education to people young and old. One of the best ways is to present science in a way that is entertaining and stimulating. Cosmos: A Spacetime Odyssey does this through the use of thrilling visuals. It is truly a feast for the eyes, on par with the numerous fictional shows and games vying to grab the attention of viewers. Along with these visuals, Cosmos also presents its subject matter in a straight-forward, easy-to-understand manner. You don’t need a PhD in physics to understand the show. You don’t really need any background in science at all. Yet even for those with a background in science, it still has much to offer, covering such a diverse array of subjects as it does. One of the great things about Cosmos: A Spacetime Odyssey is also how accessible it is to people of many different ages. I’ve used Cosmos in a classroom with 12-year-old students and have seen it captivate adults as well.

From the preview, Cosmos: Possible Worlds looks to contain these same things—thrilling visuals accompanying an accessible and entertaining discussion of scientific topics. As Neil deGrasse Tyson says, “Things are about to get epic.” I can’t wait!
Posted by Michael Ray Johnson at 21:19