Greetings, everyone! It's been a while, a much longer while than I expected or intended. At the end of October last year (almost a year ago!), I posted a short update on the slower pace of the blog. I was back at school upgrading my education, and that was keeping me exceptionally busy, but even then, I expected to get a few reviews and things written over the passing months, particularly over the December break. Alas, while it was a great program and I loved just about every moment of it, the schedule was exhausting and by the time December break came round, I was too exhausted to do anything other than rest. Then things restarted in January and were even busier.

The program finished a few months ago (I graduated with honours, by the way, and got my B.Ed. and official Ontario teacher certification, yay!), at which time I intended to take a couple weeks to rest and relax and then get back to updating this blog. But then various other things cropped up. A number of personal and family issues have gotten in the way. There have been several occasions where I thought things were all back to normal, but then didn't work out. Indeed, in early August, I responded to a comment on the blog asking if I'd be doing any more reviews, saying that I'd be back the very next day. I honestly meant it at the time! I had my review of the Pathfinder RPG Strategy Guide partially written and fully expected to have it finished and posted the next day. Then life happened, and nearly two more months have gone by.

Well, things have finally stabilised and posting has recommenced—hopefully to continue unabated. I realize that I've certainly lost readers in the long absence—it's not like they had anything to come and read—but with a little luck, maybe some of them will hear of my return and find their way back. I've actually been quite amazed that, even though the daily number of views for the blog have gone down considerably since last year, I've still been getting 100-200 views a day. My older posts still draw interest, it seems!

At any rate, looking to the future, here are my plans:

I had another extended absence in early 2012 (due to my wife's health issues). On that occasion, when I came back, I just skipped over everything I'd missed during that time. For example, I didn't review any Pathfinder books that were released during that gap. This time, I intend to do things differently. This time, I intend to cover everything I've missed, though it could take awhile because I've missed quite a lot.

For Pathfinder and other roleplaying reviews, I'm probably going to jump around a bit. I'll try to cover some recent releases as well as things released during the gap (such as my review posted yesterday of the Strategy Guide, which was released last spring). I'll be covering Adventure Paths in order, though, so those will start off with the first part of Iron Gods, Fires of Creation. I also intend to look at some of the more recent releases for the Doctor Who – Adventures in Time and Space game, recently renamed simply the Doctor Who Roleplaying Game.

Speaking of Doctor Who, I also intend to finish reviews of Series 8. I only got as far as “Time Heist” last year, leaving seven more (and the Christmas special) to complete. As you can see, though, I've already started into Series 9, which is currently airing. My review of “The Magician's Apprentice” is already up and I'll have a review of the second episode, “The Witch's Familiar” up sometime tomorrow (for real!). From here, I'll be reviewing each episode as I normally do, in the days immediately following their airing. At the present time, I don't know exactly when I'll get round the remaining episodes of Series 8. It might not be until after Series 9 has finished. However, since I've received a few requests for it, here are my very brief reactions to the rest of Series 8.

The Caretaker – I really loved this one. It was a great examination of social issues in the context of Doctor Who, and I really like Courtney.

Kill the Moon – Ugh. I didn't like this one much at all. It just didn't grab me. I was also rather annoyed that after building up Courtney in the previous episode, this one tosses her into the sidelines and does nothing to expand on her character. I was also later disappointed that she was pretty much discarded after this episode.

Flatline – Probably the stand-out episode of the series. It had a great concept, absolutely amazing monsters. Loved it.

In the Forest of the Night – This was basically “Kill the Moon” all over again. It was way too similar to “Kill the Moon” to come so soon afterwards. It also suffered from many of the same problems, including an unsatisfying, difficult-to-believe resolution. 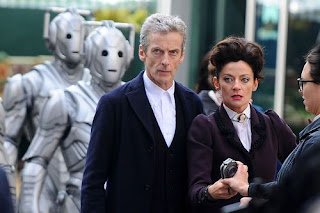 Dark Water/Death in Heaven – I enjoyed this one quite a bit. I would say it's Moffat's best series finale so far. However, as much as I enjoyed it, I have a lot of nitpicks for this one. Individually, they're minor and ignorable, but there are so many of them that they become impossible to ignore. Still, a fun story, and even though it employs another “love saves all” ending, the emotional pay-off actually works this time (although the whole idea that “love is not an emotion; it's a promise” is just nonsense).

Last Christmas – Enjoyable, but nothing particularly special. It also had too many endings.

And so there you have it. Of course, I'll be throwing in a few posts on other things that catch my fancy, as I always have.

It's good to be back!

Addendum: You also may have noticed that the site's address has changed slightly as this blog now has its own domain! You can still reach the site from the old blogspot address as well.
Posted by Michael Ray Johnson at 17:59