There are a lot of things that we take for granted in our modern world, the ability to communicate over vast distances almost instantaneously being one such thing. Phones are ubiquitous everywhere. Computers and televisions bring us entertainment. We can hear or read other people’s thoughts by pulling up websites like this one, or buy things without ever having to enter a store. But how do we do that? How do these items work? “The Electric Boy”, the tenth episode of Cosmos answers that question by delving into the life of Michael Faraday, the scientist who unlocked the secrets of electromagnetism and invented the first electric motor, amongst numerous other great achievements. As host Neil deGrasse Tyson says, while other people probably would have eventually made Faraday’s discoveries, if Faraday had never lived, the world we live in today would likely be a very different place.

In some ways, this episode is similar to “The Clean Room”, in that it focuses so heavily on the life of just one scientist. While it starts with a brief mention of Newton, who, after coming up with his laws of planetary motion, was stumped by what causes that motion, the vast majority of the episode focuses exclusively on Faraday, who was the first to solve that problem that Newton couldn’t. Unlike “The Clean Room”, however, there’s a bit more look at the science itself in the vein of most Cosmos episodes. 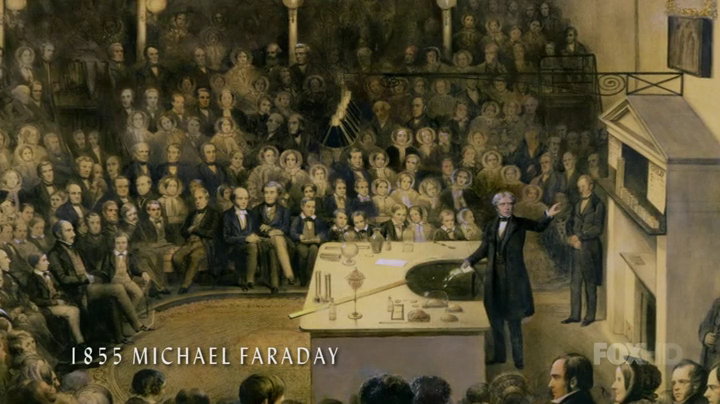 “The Electric Boy” covers Faraday’s life from his childhood difficulties in school to becoming a bookbinder and then eventually becoming a secretary and assistant to Humphry Davy, one of the top scientists of his time. It was while working in Davy’s laboratory that Faraday discovered the means to make a spindle revolve fully, creating the very first electric motor. This discovery made Faraday a bigger name than Davy, who, out of bitterness, assigned Faraday to the task of developing high-quality lenses. After Davy’s death, however, Faraday took over his position as head of the Royal Institution. In addition to his scientific achievements, Faraday was also active socially. He started the Royal Institution’s annual Christmas Lecture, designed to teach science to children. This series of lectures continues to this day and has been presided over by such luminaries as Richard Attenborough and Carl Sagan.

We also learn how, in later life, Faraday began to suffer from memory loss and depression. Yet despite this, he went on to make some of his greatest discoveries, in particular the fields common to electricity and magnetism. He postulated that light might also be tied to these forces and eventually discovered that polarized light passing through a glass sample (that he had kept as a reminder of his failed work in optics) could be manipulated by an electromagnetic field. 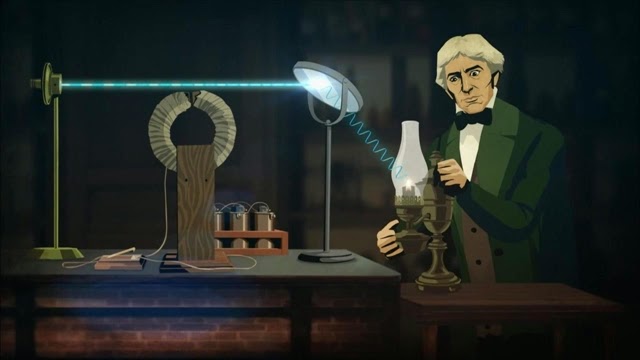 Despite being born in poverty in the incredibly class-conscious society of nineteenth century England, Faraday had managed to rise to a position of prominence and overcame the shackles of his social class. Yet there was one thing he wasn’t able to overcome: his lack of formal education. Despite the experimental data he gathered in support of his theories, he couldn’t do the math behind them, and without the math, the scientific establishment of the time considered his belief in “fields” to be the stuff of dreams. It wasn’t until James Clerk Maxwell took an interest in Faraday’s work and developed the math behind it that Faraday’s work was completely accepted. Maxwell discovered one other thing that Faraday hadn’t—that the fields are not static and in fact move in waves. It is this movement that allows us today to send information at the speed of light from one location to another. It is this discovery that lets me post this review for people to read, and for people to text each other messages, or watch television. 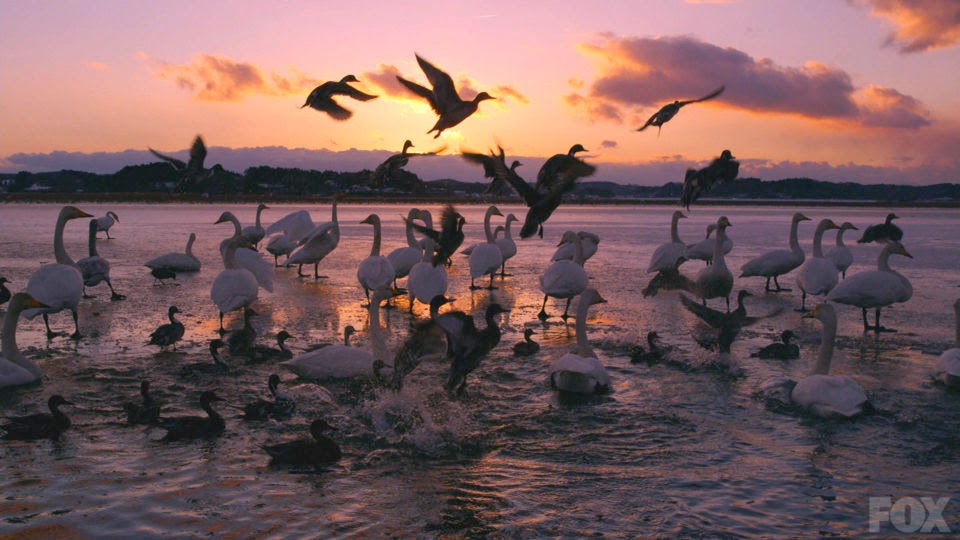 In addition to covering the life of Michael Faraday, Tyson also takes the time to explain how the Earth’s magnetic field works and how gravitational waves keep the planets in orbit—that mystery that Isaac Newton himself was unable to solve. We learn how birds are able to detect and process the fluctuations in the Earth’s magnetic field and use that information to navigate. It’s how birds successfully travel south for the winter and then back north again to their original home, and it’s how messenger pigeons are able to deliver their messages unerringly.

We take so much of what we have now for granted. We expect our instant communications to occur whenever we need them at the press of a button. Yet we owe all this to Michael Faraday and James Clerk Maxwell. This episode of Cosmos gives them their proper due. The episode ends with a quotation from Faraday: “Nothing is too wonderful to be true if it be consistent with the laws of nature.” The universe is a truly wondrous place, and Cosmos lets us see just how wondrous.
Posted by Michael Ray Johnson at 00:34