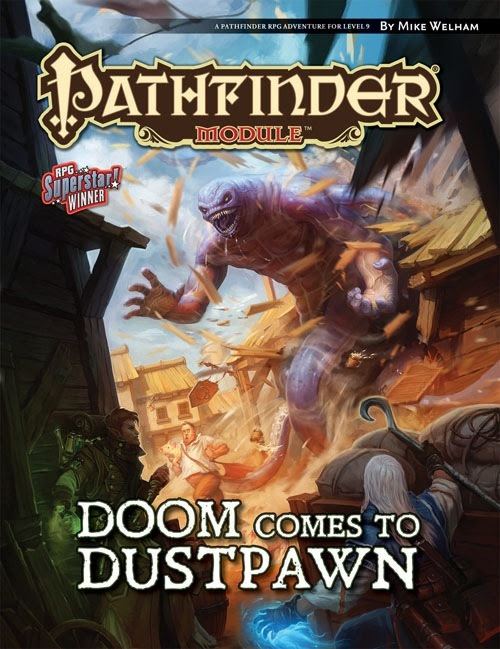 For some reason, ever since the adventure was first announced, every time I see the name Doom Comes to Dustpawn mentioned (generally in comments on the Paizo messageboards), I misread it as Dust Comes to Doomspawn. I don’t know why. I just know that I have to keep correcting myself in my head. I had to be extra careful just to write the name correctly above, and I will likely have to be extra careful throughout this review. Since I can’t stop myself making this frustrating misreading, I thought I’d share it with all of you, possibly causing you to make the same misreading from now on and share in my frustration.

I am so cruel.

Of course, the question is, does Doom Comes to Dustpawn deserve my cruelty? And the answer is that it most definitely doesn’t. Doom Comes to Dustpawn by Mike Welham was the winning entry from last year’s RPG Superstar, a contest Paizo runs annually to find new writing talent. It’s been a very successful contest for Paizo, bringing a bunch of great new writers into the gaming world. Old pulp science fiction stories are the very clear inspiration for this adventure about an invasion from outer space, but, of course, reimagined as fantasy for the Golarion setting. The adventure cleverly mixes site-based encounters with event-based ones, allowing for an adventure that builds towards a specific climactic event, but does so in a very open-ended way, leaving the player characters to guide the action and development to that point.

A little over a century ago, elven astronomers from the country of Lirgen (which would later be destroyed by the Eye of Abendego following the god Aroden’s death) launched an ambitious plan to travel into space after their leader received a vision from Desna (at least so he believed). They built themselves a magical spaceship, successfully launched it, and used it to begin a long journey out of the solar system. They kept in contact with Lirgen via magic and also kept detailed records of their observations in dream crystals, items that could record and replay images in the form of dreams. After they mysteriously lost touch with Lirgen (due to the aforementioned death of Aroden), they continued on with their mission.

After fifty-six years of travel, they encountered the being that had first inspired Gelviel, the group’s leader, to embark on this expedition. But it was not Desna. Rather, it was a creature that called itself the Emissary from Beyond, (in truth a vespergaunt), and it drew them out here under false pretences. The elves tried to fight against it, but it used its magic to dominate them and, with the power of the dream crystals, mutated them into nightmarish, but subservient creatures. It then sent the ship, Lirgen’s Glory, back towards Golarion.

Another fifty-six years passed, and the ship reached Golarion once more. However, unable to find their home port in Lirgen, the ship was forced to crash near the Isgeri town of Dustpawn.

My only real disappointment about Doom Comes to Dustpawn is that after such a brilliant set-up, it has an extremely generic hook for the PCs’ involvement: An NPC the PCs have never met before hires them to investigate the fallen meteor that he believes isn’t really a meteor. The adventure opens some time after the crash of the Lirgen’s Glory, at a point when other expeditions have already failed to return and rumours of strange monsters in the surrounding farmlands have begun to spread. I can’t help but feel that there is a missed opportunity here for a truly exciting opening. Instead of bringing the PCs in after the fact, have them in Dustpawn at the time of the crash. Let them see the “meteor” streak overhead and smash into the ground somewhere to the south. Allow gamemasters to tailor the reasons for the PCs being in Dustpawn to their own campaigns and let the PCs have a personal interest in the adventure right from the start, instead of drawing them in with the lure of money. True, “NPC stranger pays PCs for a task” is a staple hook of roleplaying game adventures, used since the earliest Dungeons and Dragons adventures, but as I’ve said before in other reviews, its constant use for the last several decades has left it stale and repetitive. I don’t think there’s anything wrong with using it once in a while (particularly if it fits a GM’s particular group), but I would really like to see more variety—more adventures with original, exciting openings like Burnt Offerings, and fewer like Broken Chains or Shards of Sin.

Changing the opening so that the PCs are in Dustpawn when the Lirgen’s Glory crashes would mean making a few other changes to the adventure, but nothing too substantial. The cultists of the Dominion of the Black (which the Emissary from Beyond serves) could receive the Emissary’s call earlier so that they are already established in the area at the time of the crash. It would mean that they won’t yet have been able to collect many of the scattered dream crystals, but this could add an extra exciting element to the adventure. The adventure for the most part would remain the same. Dalviss Crenn can still seek the PCs out and tell them of his suspicions regarding the meteor; the PCs will just have more reason to want to seek out the crashed ship and solve the mystery. Indeed, if I run this adventure at some point in the future, I will definitely make these changes.

Once the PCs are motivated to start the adventure (either by the book or by my proposed changes or by some other method), Doom Comes to Dustpawn becomes really quite excellent. The thing I like most about it is the degree of choice the PCs have in how they want to proceed. They can head out immediately to seek the crashed ship, they can investigate the mystery of Dalviss’s missing cook, or they can investigate the strange prospectors (actually cultists of the Dominion of the Black) staying at Dalviss’s inn. All of these things link together, of course, and pursuing one avenue will eventually lead the PCs along the other ones, but the amount of choice afforded the PCs gives them the feeling of truly leading this adventure rather than the adventure leading them.

While most of the encounters in the adventure are location-based, the adventure still manages to maintain a dynamic feeling to it. It doesn’t fall into the trap that a lot of dungeon adventures fall into, that of making it seem like the monsters just stand around in one place waiting for the PCs to show up and kill them—not that I would call this adventure a dungeon crawl, although there are a couple of small caves and the ship itself to travel through. The villains and creatures in this adventure actually move around. The prospectors, for example, have a schedule that they follow from day to day, and so while their stats and details are provided with the description of their inn room, simply going to that room doesn’t mean the PCs will encounter them there. The PCs might even encounter the prospectors at multiple times in the adventure (and at different locations) depending on how they choose to approach or deal with the prospectors.

The only exception to this is the Lirgen’s Glory itself, which does seem a bit static in its layout. Its occupants do just stay in one spot until the PCs arrive. Indeed, the text specifically states that Gelviel hasn’t left the bridge in decades. However, the ship is a small enough “dungeon” that the PCs will likely pass through it too quickly for it to feel static. (As an aside, with the ship’s layout, the adventure makes the classic science fiction/fantasy mistake of not having a lavatory or any explanation of how the occupants deal with waste, wash themselves, or indeed keep themselves fed for a 112-year journey.)

There are several strong NPC characters in Doom Comes to Dustpawn. In particular, Abtaroh Vorenic, leader of the cultists, makes for an intriguing villain. She’s not actually out to kill the PCs. Indeed, she’s more than willing to work with the PCs if doing so will help her accomplish her goals to acquire the orrery of distant worlds, a magical item on board the Lirgen’s Glory. Of course, it’s unlikely that the PCs will want to help her attain this, but she could become a temporary ally.

The adventure adds another subtle element that impacts the PCs interactions with NPCs and even the PCs themselves. The cultists have been poisoning Dustpawn’s water supply with a slow-acting curse that gives the locals nightmares and gradually makes them more and more antagonistic. Eventually, it will cause them to turn into creatures from their nightmares, mutating them like the elves on the Lirgen’s Glory and turning them into servants of the vespergaunt. This adds an extra element of mystery to the adventure as the PCs have to contend with the town slowly turning against them. On top of that, if the PCs drink from the local water supply, they too can become tainted by the curse.

While most of the adventure’s encounters are determined by the PCs’ actions, there are some scheduled event-based encounters that occur once the PCs have completed their investigations. They all centre around the arrival of the Emissary from Beyond, an arrival the PCs should know by now is imminent—exactly how imminent, however, is really up to the GM. The timeframe should be such that the PCs have enough time to be ready, but still feel like they’re racing against the clock. These events begin with the townsfolk starting to go through their mutations, including the PCs’ patron Dalviss Crenn.

Finally, the Emissary from Beyond arrives. The adventure does a wonderful job of building up the Emissary’s arrival, making the final battle with it truly climactic. Using a vespergaunt as the adventure’s major villain also helps drive home the other-worldliness of the entire adventure—an amorphous blob of intelligent goo with powerful magical abilities (vespergaunts were first introduced in the Inner Sea Bestiary). In a game with so many weird and unusual monsters, it can be hard to find something that seems alien compared to everything else, but a vespergaunt certainly fits the bill.

Overall, Doom Comes to Dustpawn is an excellent adventure, and an excellent start to Mike Welham’s rpg-writing career. It blends pulp science fictions with Pathfinder-style fantasy to create an exciting premise and an exciting adventure. Apart from my quibble with the hook for the PCs, there is very little wrong with the adventure, and it shows just how successful the RPG Superstar contest can be at finding new talent.
Posted by Michael Ray Johnson at 13:47