Thoughts on a New Doctor for Doctor Who 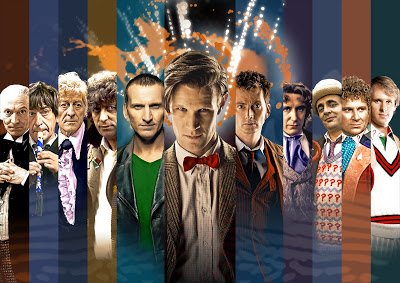 Now that Matt Smith has announced that he isleaving the role of the Doctor with this year’s Christmas special, people are, not surprisingly, speculating on who the next Doctor might be. Some people are probably even speculating on when the next Doctor will leave (after all, from the moment Matt Smith got the role, people were asking him how long he would stay). So I thought I might as well get in on the speculative act and give my thoughts on what I would like to see in a new Doctor.

A lot of people are listing established actors that they feel would be good fits for the Doctor. People are throwing a lot of names out there, some extremely well-known and famous, others not quite so famous but still fairly well-known. These names run the course from Sir Ian McKellan to Patrick Stewart to Helen Mirren. And of course, if you’re going to name a specific name, there really isn’t any other choice but to name someone well-known because otherwise...well...you’re not likely to know any other specific names to name. If I were to go that route, I’d probably choose Chiwetel Ejiofor just because I think he’s pretty awesome. However, I think Neil Gaiman makes a very good point that the next Doctor should be someone unknown, someone who comes without preconceived expectations of how he or she should play the part, someone who can surprise us all.

Of course, while I look forward to being surprised by the new Doctor, there are certain things I hope to see. This doesn’t mean that if I don’t see these things, I’ll automatically hate the new Doctor—I haven’t disliked a single Doctor yet—they’re just things that I would be looking for if I were in charge of the show (I can dream, can’t I?).


First, I’d like to see a slightly older Doctor. With Smith and David Tennant, we’ve had a couple of quite young Doctors in a row, and an older Doctor would make a nice change of pace. I highly doubt we’ll ever an elderly Doctor like William Hartnell ever again (although I’d personally be all for it), but there’s no reason we can’t have some actors in their 40s once in a while.

I’d also like to see a calmer, less manic Doctor. Matt Smith does a lot of wheeling around and speaking fast. He’s full of energy. David Tennant could be quite similar in some ways. These aren’t bad things, but I’d like to see a more intense, more serious Doctor just as a change. A lot of recent Doctors, Smith particularly, have cited Patrick Troughton as a major influence on their interpretation of the Doctor. As great as Troughton was, I think it’s time to see a Doctor influenced more by William Hartnell or Jon Pertwee, or even Tom Baker. Nobody ever cites Pertwee as their influence, and I think that’s a shame. He’s a popular early Doctor who helped define the role in its first decade for the generations to come. I think it’s time for a Pertwee-influenced Doctor.

By “more serious”, I don’t mean that the twelfth Doctor shouldn’t have a sense of humour. Doctor Who has always thrived on humour and not taking itself too seriously, so the Doctor should always have a strong sense of humour. However, there are different kinds of humour. The eleventh Doctor has a very physical humour, all part of that manic, physical performance. He drops down chimneys as a way of entering a room, he spins around, and he yells, “Geronimo!” A subtler approach to comedy, maybe with a biting sarcastic comment here and there, would make a stark contrast to Smith’s Doctor—and regeneration is all about change and contrast.

Of course, there’s also the question of whether the next Doctor should be a woman. Ever since Tom Baker left the role, this question has come up during the search for every new Doctor, getting debated perhaps just a little bit more each time (although Jezebel oddly seems to think it’s a brand new idea). This time is certainly no exception. There are people passionate on both sides. Still, the arguments against a female Doctor usually come down to tradition and a lack of precedent, and there’s some validity to those arguments. However, Doctor Who has always been a show about breaking the mould and doing something different. I think a female Doctor would totally be in keeping with this “tradition” of the show. Not to mention the fact that "The Doctor's Wife" confirmed that Time Lords can change sex during a regeneration. Personally, I think a female Doctor’s time is overdue, except...

I don’t trust Steven Moffat to create and write for a female Doctor (those wondering why should check here or many of my episode reviews). A female Doctor would be a huge change for the show and for the character. The Doctor has spent 1000+ years as a man. Changing into a woman would require a level of care in character development that we just haven’t seen from Doctor Who since Moffat took over. I suspect that we would basically just get a repeat of River Song, rather than a unique character. As such, I think the twelfth Doctor should be a man and the thirteenth Doctor should be a woman.

All that said, I suspect that I will find something to like in whoever we get, man or woman. All the qualities I’ve listed above are just personal preferences for how I might do things. They’re certainly not the only things I’ll accept. The arrival of a new Doctor is always an exciting moment in the show, and while I might be sad that the current Doctor is leaving, I always remain excited and optimistic about what is to come.
Posted by Michael Ray Johnson at 16:47