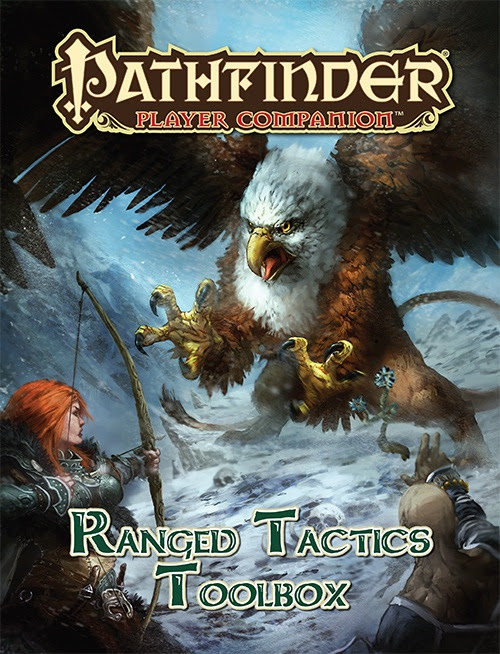 When the Ranged Tactics Toolbox first showed up on Paizo's schedule, I must admit it did not excite me. A book with new options for ranged combat in a game that already has huge numbers of options for combat did not strike me as something particularly innovative. Rather, it seemed more like...well, scraping the bottom of the barrel, to put it bluntly. Like ideas were starting to run out. The announcement of further books with “Toolbox” in the title only strengthened this impression.

After reading the book, that initial impression hasn't changed all that much. Don't get me wrong. This isn't a bad book and there are some interesting options in it. However, I do have to question what it really adds to the game, and I'm not sure I can come up with a good answer. The Player Companion books are supposedly part of the Golarion setting, and while this book has a few things keyed to certain lands and cultures, it doesn't really expand on the world much. Admittedly, this is somewhat in keeping with other Player Companion books, which have become more and more about character options than player-oriented world material. But its character options also don't really stand out amongst the myriad other options already out there. Although they are technically new, they feel more like retreads of things that have been done many times before.

It is an unfortunate fact that the more new options are added to the game, the more likely those options will end up never used. I find this particularly true of the Player Companion books. With a few notable exceptions, after an initial reading, the vast majority of them end up sitting on my shelf and never touched again—except when sifting through to look for one of those few exceptions, and then it's only to move them out of the way. I suspect Ranged Tactics Toolbox, despite what interesting things it does have, will end up being one of those never used books.

Of course, many people out there don't own every book and there will certainly be people for whom Ranged Tactics Toolbox may be the only book beyond the core Pathfinder books they own. Such people may well get quite a lot of use out of the book. I think it's important to keep this in mind, and I try to review products from both the perspective of how they work on their own separate from all other products, and how they fit into the larger whole. And that's why I say Ranged Tactics Toolbox isn't a bad book. It certainly has good and interesting things when looked at by itself. It's just that, when viewed as part of the larger whole, it kind of vanishes in the sea of options.

Ranged Tactics Toolbox opens with an introduction (following the standard “For Your Character” section) that provides an overview of the whole book, along with some advice on “Choosing Your Weapon”. A sidebar provides a very interesting look at three cultural ranged weapons: the double crossbow of Absalom, firearms of Alkenstar, and the starknife of Varisia. As someone who loves these kinds of details, I appreciate this small nod to the setting.

The book then presents several sections on different kinds of ranged tactics, including close-range, mid-range, long-range, ranged magic tactics, and “special tactics”. Each section is two pages long. The tactics covered in these sections are actually quite brief and basic, and contain such things as “avoid attacks of opportunity” and “don't shoot your allies”. The bulk of these sections is instead filled up with new feats and archetypes, plus a few other class-specific options here and there, like rogue talents and magus arcana. Of particular note are the Ranged Disarm and Ranged Trip feats, as well as the feat Covering Fire, which lets you use a ranged weapon to aid another.

The section on special tactics looks at unusual circumstances in encounters, such as fighting while climbing or using illusions in combat. As well as some new feats like Clinging Climber (which lets you cling to your climbing surface with just your legs and feet, freeing up both hands for combat) and Friendly Fire Manoeuvres (a teamwork feat which makes your allies not provide soft cover for your enemies), the section also contains several new ranger traps.

The centre two pages of the book contain schematics of several ranged weapons, including longbows, shortbows, various kinds of crossbows, and the double-barrel pistol. A sidebar discusses weapon histories and how you can add additional flavour to a game by describing the specific materials your characters weapons are made from. While these sorts of details don't have any mechanical effects on the game, they add a lot of colour and can significantly enhance the play experience. I really like these centre pages.

The second half of the book focuses on new equipment and magic items, including new kinds of ranged weapons. In particular, I rather like the magic ammunition section. There has always been a large variety of magical weapons in the game, but ammunition is less well-represented, even though it's much easier (and cheaper) to carry a large variety of ammunition than it is a variety of weapons. The ammunition included here include things like vulnerability bolts, which make any poison placed on them more potent, and boulder bullets, which are sling bullets that expand to boulder size when launched and behave like siege weapons.

The final two-page section contains several new spells for ranged combat, such as calm air, which disperses fog and reduces wind force, and rain of arrows, an 8th-level sorcerer/wizard spell that sends a cloud of arrows down upon an area. There is also a sidebar containing a list of creatures with ranged attacks that can be summoned with summon monster or summon nature's ally spells.

The two inside covers contain charts with the stats for all ranged weapons in the game—well, except the new ones included in this book, which are oddly absent. They get a separate chart in their section. This is rather annoying as it defeats the purpose of having the charts there in the first place. It's nice to have charts that compile everything together, but if they don't actually have everything, you still have to flip pages around.

On the whole, Ranged Tactics Toolbox is a decent book and there are some things in it that I rather like. However, I don't think those things are memorable enough to draw me back to the book when I'm designing new characters, even ones that specialise in ranged combat. There's just so much else out there, more than any one person can possibly keep track of. As a result, even the good stuff gets lost.
Posted by Michael Ray Johnson at 15:17