Doctor Who - Robot of Sherwood 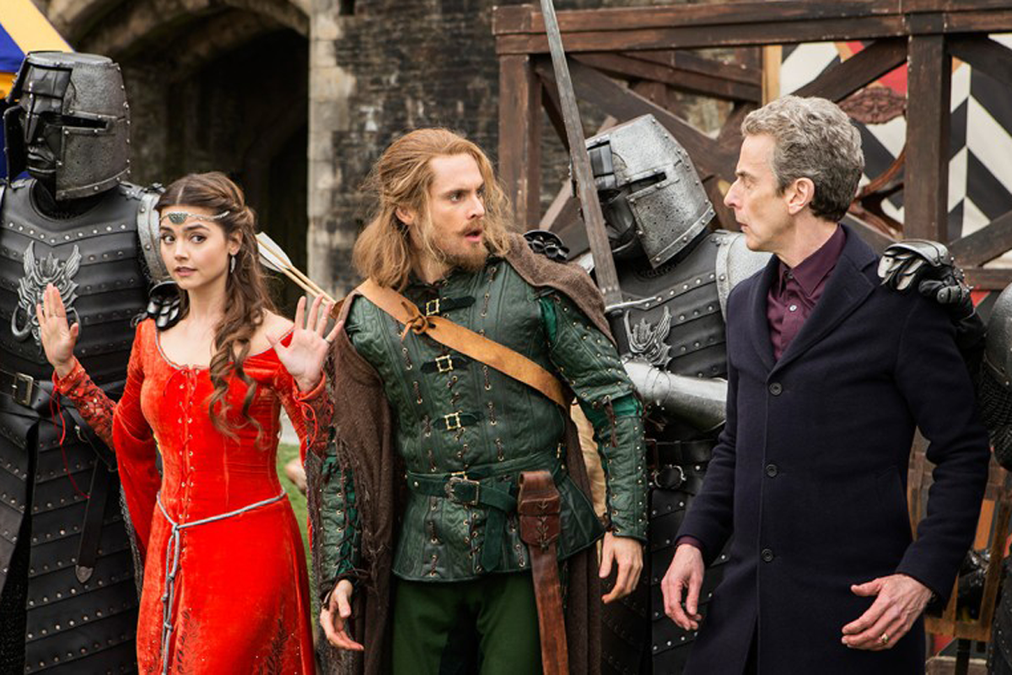 Doctor Who is a show capable of various different styles, from light and campy to dramatic to dark and foreboding. Yet even at its darkest, it always has a sense of humour. It might be the Doctor cracking macabre jokes in last week's “Into the Dalek” (“Top layer, if you want to say a few words”), or the zany antics of this week's “Robot of Sherwood”. It's somewhat fitting that, after a couple of rather dark episodes, the series should turn now to a light-hearted romp with Robin Hood and his Merry Men. It helps to show that, while Peter Capaldi's Doctor may be a darker, more serious Doctor, this is still Doctor Who and it can still do anything it wants.

Alas, even Doctor Who can take it too far sometimes, and “Robot of Sherwood” is an example. I would never want Doctor Who to lose its humour and it absolutely is possible to have a silly, fun, and ludicrous story that works. Doctor Who has certainly done it many times. “Robot of Sherwood”, however, tries too hard to be funny, and it does so at the expense of character. There are some genuinely funny moments in the episode, and Peter Capaldi and Tom Riley (who plays Robin Hood) have some brilliant moments together. Their rivalry is very entertaining to watch. Yet the episode frequently devolves into slapstick and nonsense, resulting in a story that, while entertaining, is ultimately unsatisfying. It's not a terrible episode and it has its moments, but it could have—and should have—been so much more. 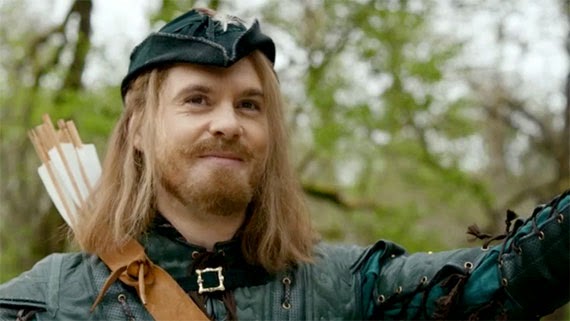 The biggest problem with “Robot of Sherwood” is its cast of cardboard cut-out characters, which heavily detract from the experience. There's a good story here that can't quite rise up to its potential. The only guest character to get any real attention is Robin Hood himself, and to be fair, his development is much better than what other “celebrity historicals” usually give their guest historical personages. Unlike Winston Churchill in “Victory of the Daleks” (also by writer Mark Gatiss) or Richard Nixon in “The Impossible Astronaut”/”Day of the Moon”, Robin actually has some depth of character and starts to feel like a real person. We learn that his merry, laughing persona is just a façade to hide a troubled soul underneath, and we get to see him react in real human ways (particularly through his interactions with the Doctor). This does sometimes get undermined by the slapstick humour which manages to dehumanize him at points (such as the archery competition, which I'll discuss shortly), but it's nice to see an attempt to give him some depth. 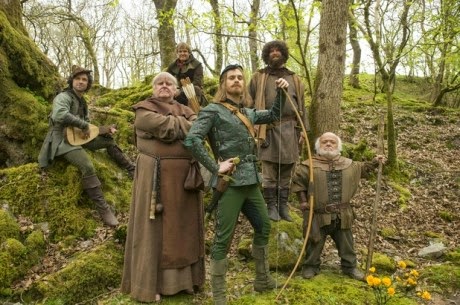 The other characters fare much worse. The Merry Men are nothing more than the punchlines for jokes and the only thing separating the Sheriff from a pantomime villain is that he never actually twirls his moustache (that said, Ben Miller has a great presence in the role and looks so uncannily like Anthony Ainley that one half expects the Sheriff to turn out to actually be the Master). The ending twist with Marion is the worst example. I find myself completely unable to come up with even one adjective to describe her personality with. She does nothing of any consequence in the entire episode, and then...Surprise! She was Marion all along, and she and Robin have a happy reunion. She exists as nothing more than an ill-defined motivating factor for Robin (which really doesn't help with the presentation of women in the Steven Moffat's Doctor Who, something already quite problematic). Honestly, she would work far better in her role if she never appeared at all and was just someone Robin desperately hoped to reunite with one day. That, too, would have its own problematic aspects (and leave Clara the only female character in the story—which she practically is anyway), but at least it would be better than what we get.

The best comedy is character-driven, yet “Robot of Sherwood” seems to sacrifice character in favour of slapstick with scenes like Little John's introduction or the archery competition. The Little John scene produces a chuckle but then falls flat because John never becomes a character (he gets about one line after that). The archery competition is an example of taking things too far. Splitting the arrow is an iconic moment in the Robin Hood story and, naturally, needed to be included here. Having the Doctor then split Robin's arrow (especially with the reveal at the end that the Doctor cheated) is a great way to “up” this moment. But it really shouldn't have gone any further than that. Having Robin then split the Doctor's arrow, then the Doctor split Robin's again (and by bouncing it off a knight's armour in the process), and then Robin split the Doctor's without even looking at where he's firing takes the scene out of the realm of the funny and into the realm of the absurd. Yes, the absurd happens regularly on Doctor Who, but presentation and context are important. If Robin were to suddenly display the ability to fly, we would expect the story to provide some sort of context or explanation—even in Doctor Who—in order for us to accept it. This is the same sort of situation. The comedy falls flat because the episode never provides the context to allow for suspension of disbelief, and in doing so, it dehumanizes Robin, making him seem to actually be the robot the Doctor believes him to be (if he actually turned out to be a robot at the end, the scene would work better, although it would still be over the top). 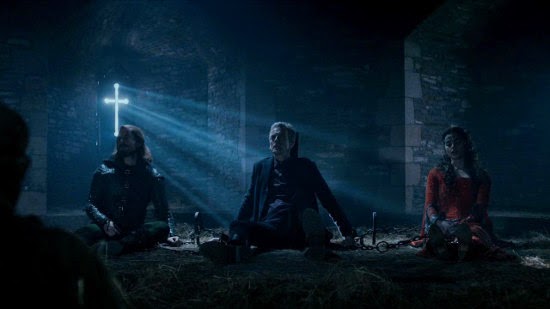 That said, there certainly are funny moments in the episode. Indeed, the best ones stem from the rivalry between the Doctor and Robin. I love the moments while they are prisoners together, each trying to outdo the other and prove to Clara that he's the better man. These moments work because they're character-driven moments (and because Capaldi and Riley so brilliantly perform their roles). They're the only parts of the story where Robin starts to feel like a real character. It's a shame we don't get to see more variety of character moments for Robin, which would allow him to become a more fleshed-out character. 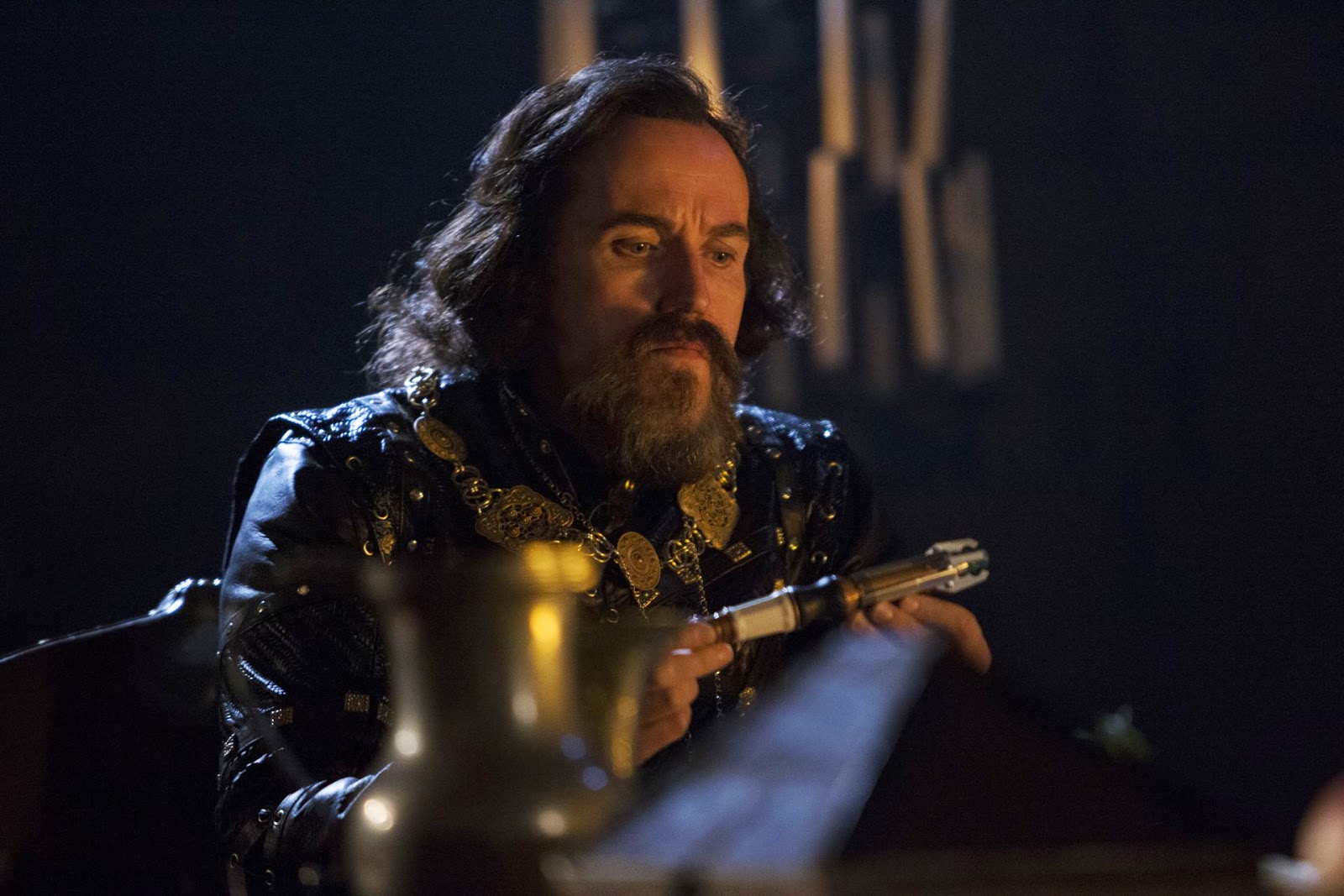 I'm also happy to see that Clara continues to be a consistent character in this story. It doesn't really do anything to develop her any further, but she at least remains the person we've seen in the previous two episodes. She doesn't actually do a whole lot in this episode, but despite that, manages to accomplish more than the other characters. I love that Robin and the Doctor's rivalry results in the jailer identifying Clara as the real brains of the operation. It's another genuinely funny, character-driven moment. Clara's subsequent manipulation of the Sheriff is another brilliant scene, and while the Sheriff may not be a particularly well-developed character, I can't deny that this scene grants him one of the greatest lines ever spoken: “For Nottingham is not enough... After this, Derby... then Lincoln, and after Lincoln...THE WORLD!”

I also like that the Doctor is not all-knowing in this story. He makes a major misjudgement early on and takes quite a while to realize and admit his mistake. Even when it starts to become clear to him that Robin is not a robot, he still clings to his insistence that Robin can't be real by coming up with the idea that Robin is in collusion with the Sheriff—just an invention to give the common people false hope. We get to see the Doctor being fallible.

This also continues this season's examination of whether the Doctor is a “good” man with its deconstruction of what makes a hero and whether storybook heroes can truly exist. It doesn't do it as well as “Into the Dalek”, partially because it feels tacked on and it's really not very subtle about it—especially Robin's somewhat fourth-wall-breaking line, “And remember Doctor, I'm just as real as you are.” This examination of heroes would work so much better if the episode actually examined Robin's relationship with the world around him more—the actual mediaeval world rather than the storybook version of Sherwood Forest (complete with throwaway line to explain it) we get.

In the end, “Robot of Sherwood” is a light piece of fluff, reasonably entertaining, and has some genuinely funny moments. I just feel that it could have done more—more with its deconstruction of heroes, more with developing Robin and his surroundings. It makes starts in these directions, but keeps getting sidetracked with its need to be funny. It tries hard, but funny doesn't come from trying. It comes naturally from the characters and how they react to the situations they're in. Without strong characters, the comedy just isn't as good. “Robot of Sherwood” is, ultimately, not satisfying.
Posted by Michael Ray Johnson at 14:33