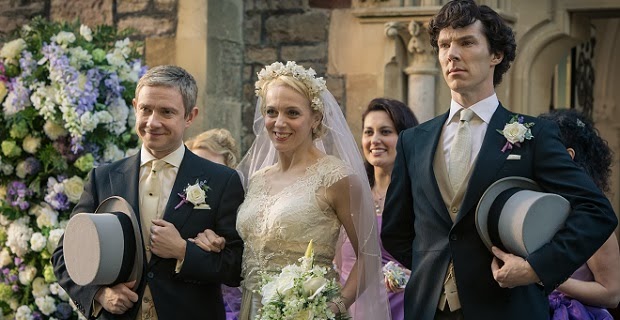 There seems to be a bit of a trend in Sherlock for the middle episode of each series to be the weakest of the three. “The Blind Banker” from Series One was weaker than the episodes before and after it. In Series Two, “The Hounds of Baskerville” was not as good as the two stories that surrounded it. I haven’t watched the final episode of Series Three yet, but so far, “The Sign of Three” seems to be following that trend. It’s not a bad episode, but it’s certainly not as good as “The Empty Hearse”.

Of course, with such short series (only three episodes each) and only three series to date, it’s a little too soon to call this a pattern. Still there’s a hint of one, and it’s easy to see why one would occur. The first episode has the task of setting up the entire series to come and, in the case of Series Two and Three, resolving the cliffhanger of the previous series. The third episode has the task of resolving everything for that year (and quite possibly setting up a cliffhanger for the next series). Both episodes have to accomplish big things, while the middle episode is situated...well, in the middle. It can feel a bit like filler. Of course, “The Sign of Three” is certainly not filler. It deals with a major even in the lives of Sherlock, John, and Mary, and serves as an important character episode for all three. However, it does suffer from problems that nonetheless make it feel like filler, and that’s a bit of a shame, as there are otherwise some really good things in the episode.


“The Sign of Three” suffers from two main problems. The first is its length. To date, Sherlock has always done really well with its 90-minute episode length. The longer-than-typical length is risky as the show becomes more a group of TV movies rather than episodes. It can be difficult to maintain the momentum and pace over an entire series (one reason why the small number of only three episodes per series is good for Sherlock). Sherlock’s episodes have generally been well-paced and have never previously seemed overly long. However, “The Sign of Three” is the first one that I’ve felt has overstayed its welcome. It’s the first time I’ve found myself thinking, “Shouldn’t this be over by now?” and then discovering there is still half an hour left to go. 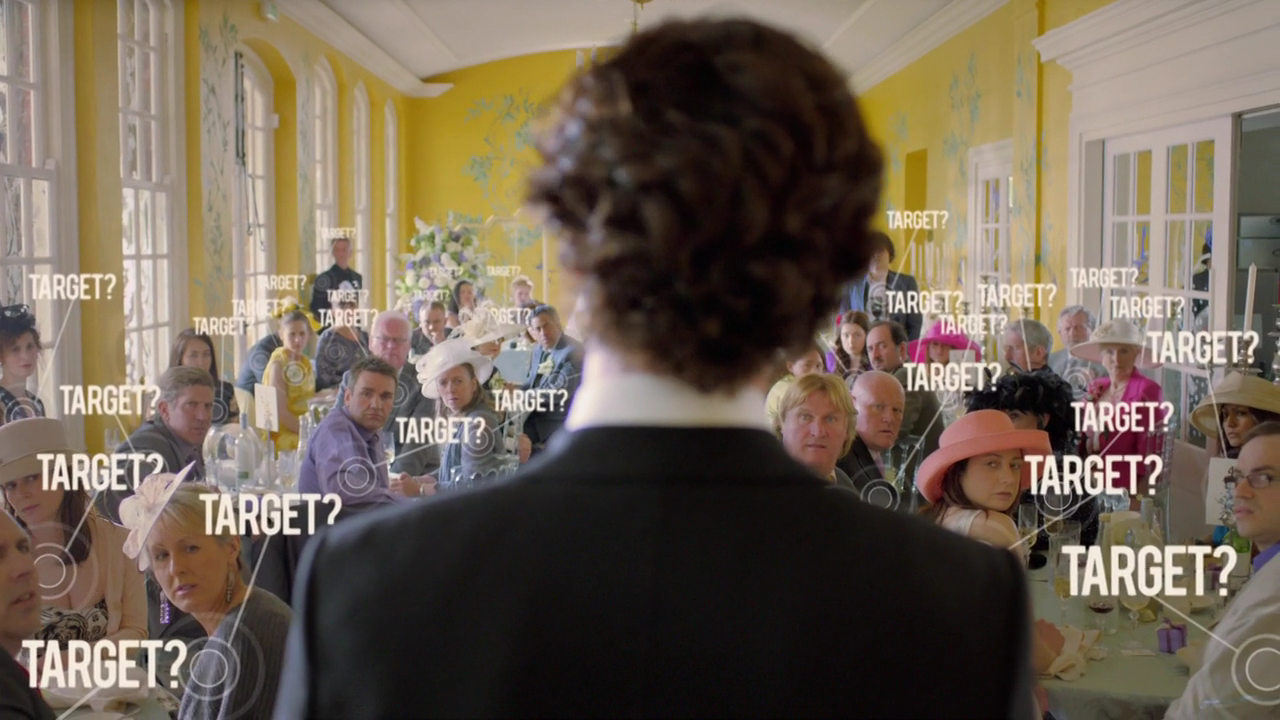 A major factor in this is the presence of quite a few rather drawn-out scenes of Sherlock’s deductive processes. While this does give some interesting insights into his psyche (particularly turning to a mental image of his brother to help him through), they drag on just a little too long. The scene as he walks amongst the guests trying to figure out who’s going to be murdered is a particular example of this. It’s quite common in Sherlock to get Sherlock-point-of-view shots where we see word deductions overlaid on people and objects. It’s generally quick and effective, but here we get the single word “TARGET?” repeated over each of the guests, each repetition and each guest gradually disappearing until only one person is left. Alas, I spent the whole time wanting to scream at Sherlock, “It’s Major Sholto!” It leaves one wondering how Sherlock can be so surprisingly stupid as not to have figured it out yet. Of course, it can be argued that he’s purposely drawing it out so as to stall for time, so that he can figure everything else out, and that would work okay if it weren’t for that “TARGET?” word implying that he doesn’t know who the target is. But even so, when exactly Sherlock figures out that Sholto is the target doesn’t change that this scene just drags on and on.

The other main problem with “The Sign of Three” is the humour. Sherlock makes heavy use of humour. It’s usually to good effect, feels natural, and only occasionally overdone (“The Empty Hearse” is wonderfully funny, if a little overdone). I like that the show doesn’t take itself too seriously. However, the humour in “The Sign of Three” constantly feels forced. The opening sequence with Lestrade trying to catch the Waters Gang is a perfect example, and it also ties into my previous point of many of the scenes being too dragged out. We get a rather lengthy sequence that is ultimately irrelevant to the rest of the episode just to set up a joke that is blatantly obvious well before the punchline arrives. It also succeeds in making Lestrade look like a complete idiot. Are we really meant to believe that he would call in all that backup without first texting Holmes back to ask what’s happening? He knows what Sherlock can be like. The result is a scene that leaves you groaning rather than laughing like it intends. Though I guess Lestrade’s response justifies Sherlock’s low opinion of his investigative abilities. 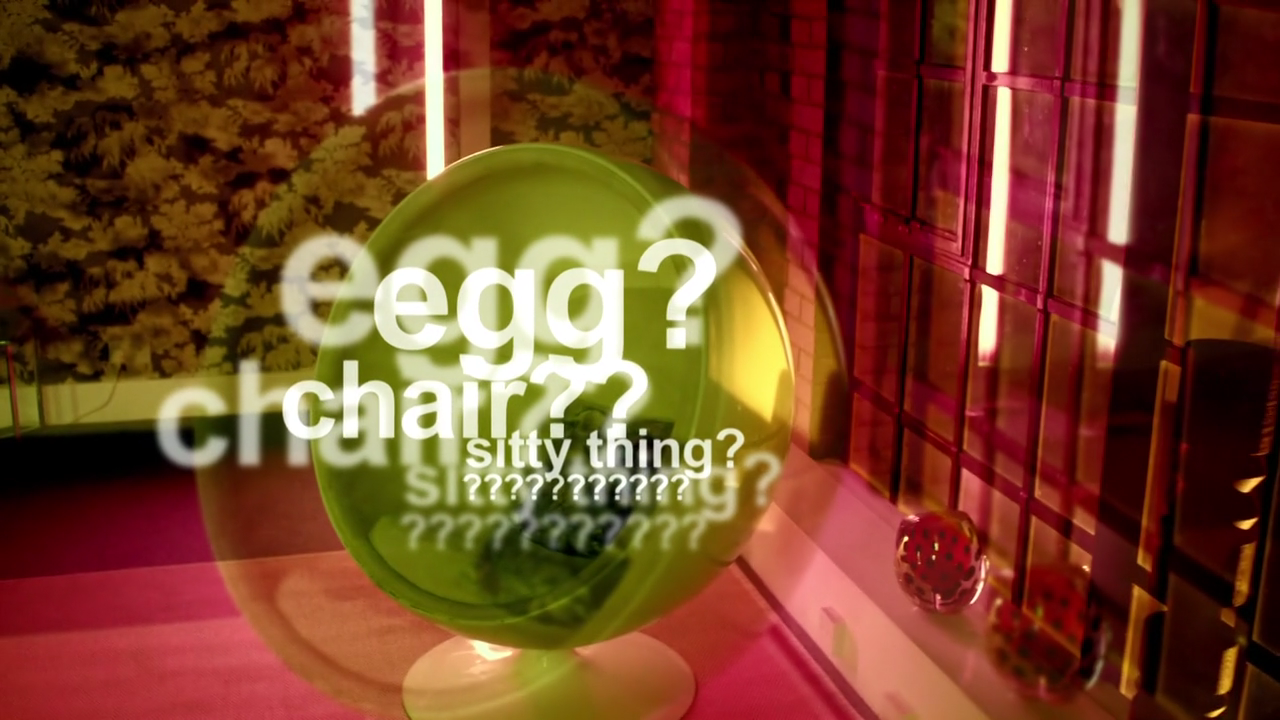 The stag night is another example of drawn-out, forced humour. The pay-off—that they return after only a couple of hours—is both a stretch to believe (considering how many different places we see them at) and painfully obvious. It’s then followed up by the drunken investigation, which manages to drag on as well (though I do like Sherlock’s point-of-view shots in this scene; the garbled deductions make a wonderful contrast to what we usually see). And I have to wonder, given that Sherlock and John were supposed to be out on the town all night, why does Mrs Hudson let in a new client anyway? Yes, she knows they are back, but she also knows it’s supposed to be their night off. Wouldn’t it make more sense for her to ask the client to come back tomorrow, once they’ve had a chance to sleep off their drinking (does she really not notice they’re drunk?). But that would mean no drunken investigating, and drunken investigating is funny—so the episode would have us believe. And so Mrs Hudson behaves in an unbelievable way just so the episode can include some drunken investigating. But, for me at least, the contrived nature of the sequence makes the humour just not that funny.

However, I don’t want to make it sound like I don’t like this episode. I actually rather do. I just wish it were about 30 minutes shorter—as no doubt some of the wedding guests wish about Sherlock’s immensely long best man speech! Some of the humour does work, in particular Sherlock recounting his reactions to being best man and learning that he is John’s best friend. “It later transpired that I said none of this out loud,” is a great pay-off and the eyeball-filled tea that is “surprisingly okay” is icing on the cake. 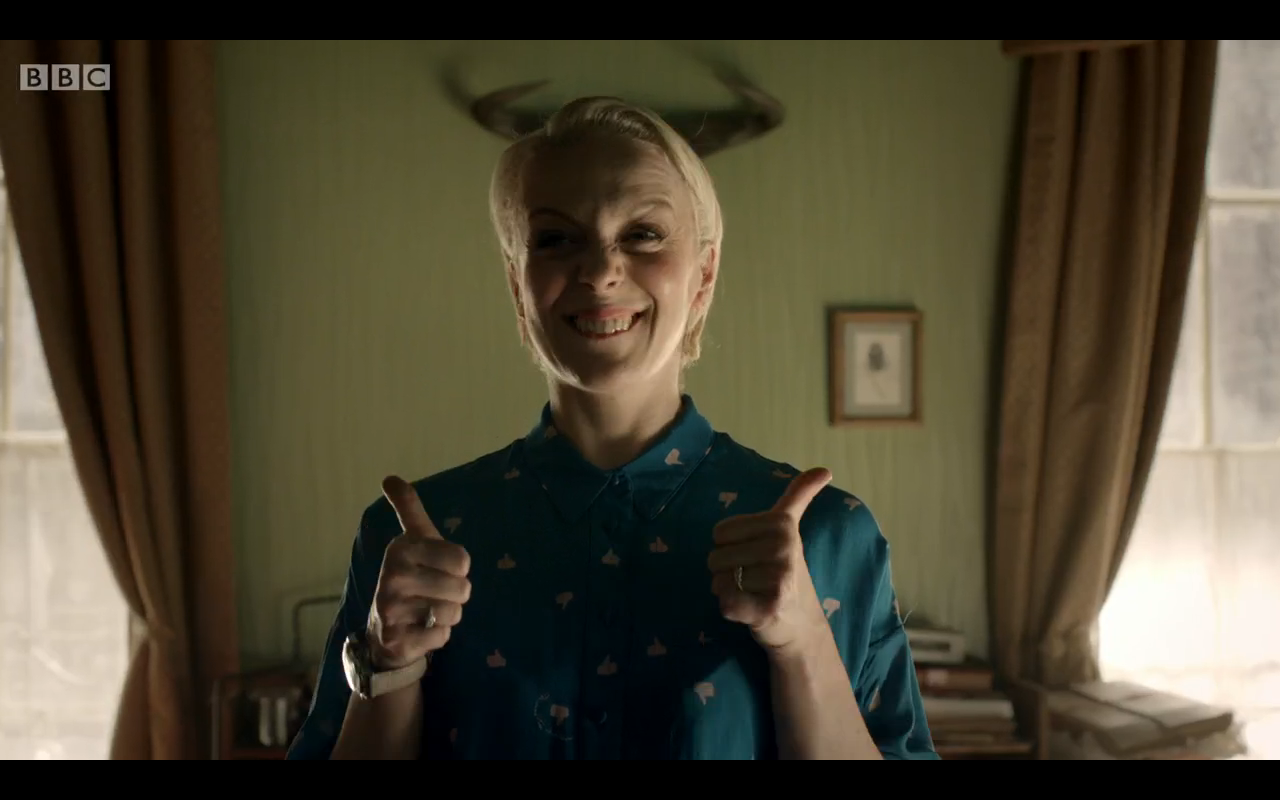 As a whole, this is a very good character episode for Sherlock, John, and Mary, and we get good development on their relationship. I’m really starting to like Mary. She has been a great addition to the cast, adding an extra dynamic to the Sherlock-John relationship, which might otherwise have stagnated without her. Amanda Abbington has great chemistry with Martin Freeman (helped, no doubt, by the fact that they are real-life partners), and I like that Mary can hold her own against Sherlock (a good contrast to the constantly downtrodden Molly). She also adds a prominent female presence in a heavily male-dominated programme.

Presenting the different (and ultimately linked) tales via a framing story (that of Sherlock’s speech) works well and helps place the focus on the characters while not detracting from the mystery (since it wouldn’t really be Sherlock Holmes without some sort of mystery or adventure going on). It’s also nice to see Sherlock admitting that he is “the most unpleasant, rude, ignorant, and all-round obnoxious asshole that anyone could possibly have the misfortune to meet.” Sherlock gets away with a lot and he still does here, but at least he knows it. 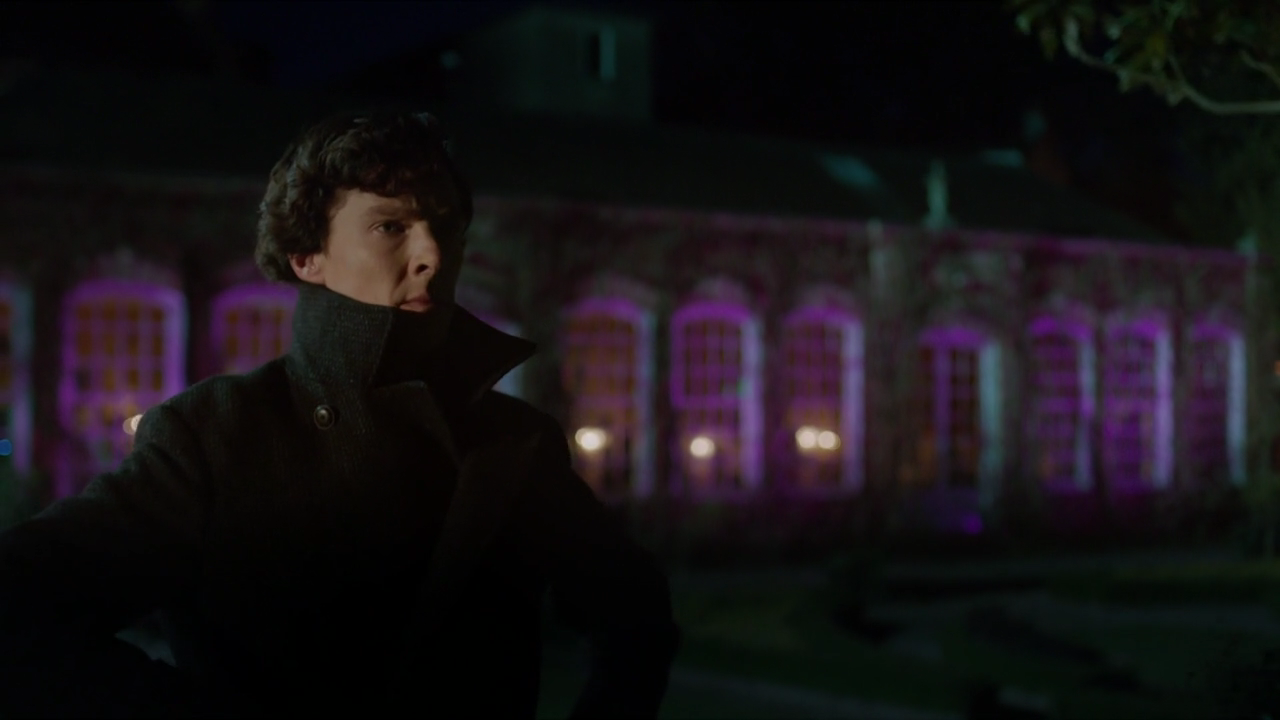 There are a number of little things that I really like. The title itself is a great word-play on the three separate-but-linked mysteries; the three characters of Sherlock, John, and Mary; the forthcoming third member of John and Mary’s family; and, of course, the Conan Doyle novel, The Sign of Four. The final shot of Sherlock walking away from the party, all alone, is very poignant—and also rather reminiscent of the end of the Doctor Who story “The Green Death” (and apparently deliberately so if Mark Gatiss’s response to Katy Manning on Twitter is to be believed) when the Doctor walks off alone, unable to deal with his companion Jo Grant leaving him to get married. The scene also ties nicely back to Mrs Hudson’s earlier comment on who would leave a wedding party early. 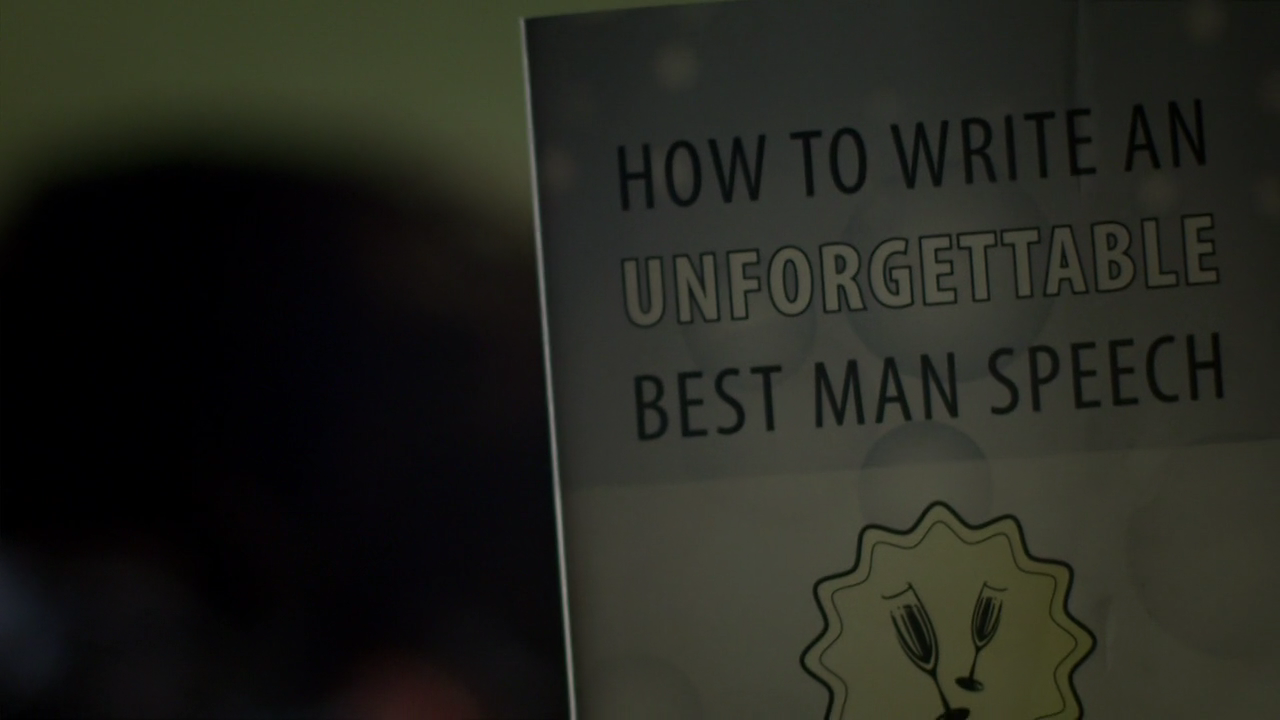 There are a couple details about the episode that confuse me a little. Exactly what was Molly and Mrs Hudson’s role in Sherlock’s speech? We see Molly worried about Sherlock making the speech and contacting Mrs Hudson, then Mrs Hudson laughing at something about the telegrams. Yet there’s no indication that I can find of what they actually did. Did they coach Sherlock on his speech? That doesn’t seem to be the case since as late as the day before the wedding, he’s asking for Lestrade’s help with it. Did they buy him the book on best man speeches we see him reading? Maybe. Why is Mrs Hudson laughing about the telegrams? Am I missing something?

I also find it very hard to believe that neither Private Bainbridge nor Major Sholto felt themselves being stabbed through their belts. Also, wouldn’t the belts have to stay pretty much immobile to hold back the bleeding that long? A slight slip or readjustment and the murder plan would fail completely as the victim starts bleeding. I admit I’m not an expert on this kind of thing, so maybe it’s not that far-fetched, but at the moment, I have a hard time accepting it. Still, far-fetched things are not really that uncommon on television, so this really isn’t that different.

So overall, “The Sign of Three” looks set to continue the trend of the middle episode of each Sherlock season being the weakest. Maybe I’ll be wrong. Maybe I won’t like “His Last Vow” at all. But even if “The Sign of Three” is the weakest, there’s still a lot to like about it, so in the end, it’s not all that bad.
Posted by Michael Ray Johnson at 21:39