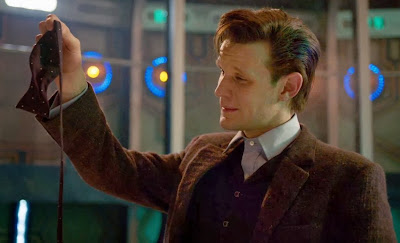 So, 2013 has come and gone. December was not my most productive month ever, but certainly not my least. My big regret for the month is that I was not able to watch the remaining episodes of the second series of Wizards Vs Aliens, and likewise review them. The season has ended now and I am placing watching and reviewing them as a top priority for January. I will get to them!

December was another big month for Doctor Who, of course, as Matt Smith’s time as the Doctor came to a close. In the lead-up to his departure, a couple of trailers for his final story arrived, as well as three separate clips. Just before the Christmas special aired, I wrote a piece expressing my concerns over the Doctor’s loss of regenerations. Then, on Christmas day, Matt Smith took a bow in “The Time of the Doctor”. You can read my review of that here. In the days following the airing, BBC America released a deleted scene from the episode, which you can watch here:

Although Doctor Who Christmas specials have become a standard since the series returned in 2005, there weren’t any during the original series’ run. However, in 1965, Doctor Who’s regular schedule fell on Christmas Day. The episode that aired, “The Feast of Steven” was the seventh episode of the epic twelve-part story, “The Daleks’ Masterplan”. Yet this episode stood apart from the remainder of the story. It didn’t even have any Daleks appear in it! Instead, the Doctor and his companions get caught up in a couple of light-hearted mini-adventures on modern day Earth—on Christmas day. The episode is infamous for its closing moments when the Doctor breaks the fourth wall and wishes all the viewers a merry Christmas. The episode is sadly lost from the archives, but like other missing episodes, the audio survives. Here’s a fan animation of the closing moments using the existing audio:

Today, January 1, 2014 marks the long awaited return of Sherlock. I haven’t actually seen the first episode yet, but will be watching it soon. I hope it’s good! But to help build anticipation for it, a prequel, “Many Happy Returns” came out last week. For people interested in the idea of a Doctor Who/Sherlock crossover, here’s a phenomenal fan video called “Wholock”:

In the world of roleplaying games, the Advanced Class Guide Playtest came to an end this month. We now need to wait until August to see the results! Paizo’s annual RPG Superstar contest also started this month. Although the deadline for entries was today, it’s now possible for the public to vote in the contest. Each round of the contest will narrow the number of competitors down until the final one wins a commission to write a Pathfinder adventure module.

I reviewed three Pathfinder products this month: Bestiary 4, Demon’s Heresy, and Towns of the Inner Sea. There are several more waiting in the wings. Expect the first, Magical Marketplace, to appear tomorrow.

Finally, I thought I’d round things off this month with a selection of the latest bizarre search terms that have brought people to this blog. As always, any spelling errors are repeated exactly.

best pens for doctors – Well, with pen in the blog’s name and lots of Doctor Who stuff, I can understand it, I guess.

google steven moffit sexist - I just found this humorous because whoever did the search felt the need to include the word google in it.

matt smith’s boner lets kill hitler – Um, does he have one in “Let’s Kill Hitler”? I’m afraid to go back and check.

ford transmissions - I have absolutely no idea.

Happy New Year everyone!
Posted by Michael Ray Johnson at 22:56